Joan of Arc in a West Bank Village 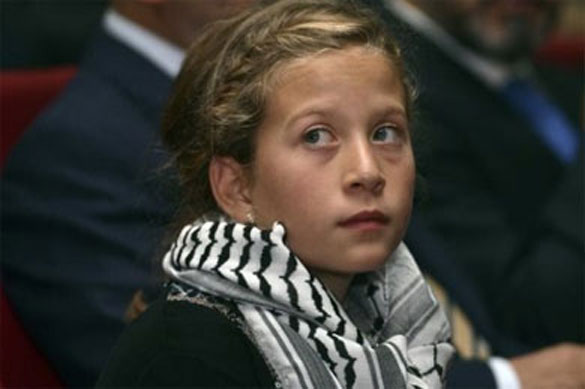 She’s 16, from a family of peasants in an isolated village. The foreign occupation outraged her, and she set out to fight it. Her actions excited her oppressed people, whose spirits rose from the depths of despair to renewed hope. She was captured by her occupiers, who imprisoned and prosecuted her.

You’re probably thinking I mean 16-year-old Ahed Tamimi, who slapped the face of an Israel Defence Forces officer. But actually, I’m referring to Joan of Arc, known as “the maid of Orléans.”

It happened 600 years ago, in the midst of the Hundred Years War between the British and the French. The British invaders had the upper hand and the French were convinced that all was lost, when something amazing happened.

In a remote village in northern France, a peasant girl rose up who could neither read nor write, and announced that she had received a message from heaven. God had assigned her to save France. Somehow she managed to reach the court of the king (who had yet to be crowned) and somehow she persuaded him to send her out with his army that was fighting for the city of Orléans.

Dressed in armour and carrying a flag, Joan of Arc put herself at the helm of the overwhelmed fighters, and so inspired them that they won the critical battle for the city. It was the turning point of the war. The French began to win battles, and the maid of Orléans was at the king’s side when he was finally crowned. But her luck didn’t hold out; as the battles continued she fell to the British, who tried her and burned her at the stake.

If the British thought they were thus rid of the annoying young woman, they had made a historic mistake. Joan of Arc was pronounced a saint by the Catholic Church and became a French national symbol and a role model who animated generations of warriors. Under her banner France became a world power. The greatest of writers and artists created masterpieces about her.

The maid of Orléans affair is considered one of the worst blunders in British history. But were the judges who convicted her all dimwits? Of course not. One can assume that among them were intelligent men – statesmen, warriors and clergy. If so, why did they act so stupidly?

Actually, they had no choice. Hundreds of years later, Britain’s Lord Acton would say, “Power tends to corrupt and absolute power corrupts absolutely.” I would paraphrase this by saying, “Ruling power tends to make one stupid, absolute ruling power makes one totally stupid.” And there is no stupider ruling power than an occupation regime.

Which brings us to Ahed Tamimi of Nabi Saleh.

Now the whole world knows her name. The whole world has seen her picture. And this is only the beginning. Tamimi is becoming the Palestinian Joan of Arc before our eyes. The internet is spreading throughout the world a photograph of her in a heroic pose, holding a flying Palestinian flag.

Soldiers, a captain and a sergeant, had stationed themselves in the courtyard of her home. She approached them, accompanied by her mother and cousin, and cursed them vehemently. They didn’t move. She hit the officer. He didn’t move. She slapped him across the face. He protected his face, but didn’t move.

That officer is the only smart Israeli in this whole story. He and his comrade, the sergeant, backed away. An intelligent occupation would have treated the incident with humour, and thus the affair could have ended. But the occupation regime isn’t capable of just letting it go that way, especially since the girl’s family members filmed the incident. The occupation has no sense of humour.

Soon Ahed was taken from her bed at night, as were her mother and sister. They were brought before a military judge who extended their detention. She is being held in humiliating conditions, was moved from lockup to lockup, and hasn’t been allowed to change clothes for a week. In the courtroom three soldiers were positioned in front of her father’s seat so that he wouldn’t be able to look at his daughter.

The army’s behaviour is clear. It wants to punish the girl “so all should see and fear.” A teenage girl who slapped an Israel Defence Forces soldier must be punished so that tens of thousands of teenagers learn a lesson. In our country you can’t burn girls at the stake, as with the original Joan of Arc. We’re more humane, but no smarter. We can lock her up.

This was indeed totally stupid. Thousands of Palestinian teenagers see the photos and their hearts swell with pride. Look how one of our own dared to confront the occupation. I want to be like her.

When I was Ahed’s age, I worked in the office of a lawyer, an Oxford graduate. Among our clients were some of the leading lights of the British administration in this land. Almost all of them were nice guys, polite and pleasant even to me, a lowly clerk. And I, who was already a member of the Irgun paramilitary organization, asked myself again and again, how is it possible? How could such pleasant, cultured people maintain such an idiotic occupation? The only answer I could come up with was the aforementioned paraphrase of Lord Acton.

The British regime was stupid. All its underlings – governors, officers and judges – acted stupidly. Most of them were intelligent, educated, pleasant people. But they were doomed to act stupidly, because that’s what happens when you control another people. You have no choice.

Ahed Tamimi was apparently chosen by a higher power for the role she is fulfilling. She’s strawberry blond, like most of the girls in her village, blue-eyed and brave. Abusing her in jail will only enhance her ability to impress others her age who are living under occupation.

I’m sure that among both the civilians and officers managing the occupation of the Palestinian territories, there are a lot of intelligent people. But it can’t be helped. Occupation makes you stupid. In the end, this stupidity will bring us down.