For The Abrahamic Religions, Clothing Is both Trivial and Vital 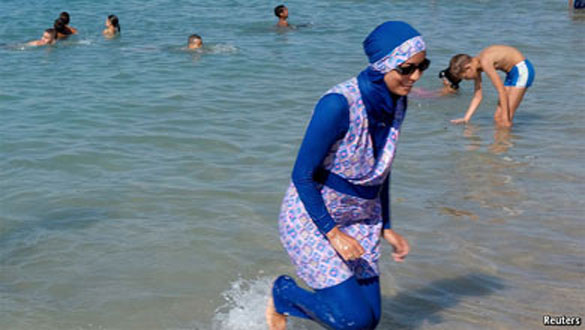 WHY do the religious authorities feel strongly about what we wear when we go about our daily lives, when we worship....or indeed when we swim? That is not a silly question. After all, sacred literature contains many statements that seem to make the opposite point: that clothing doesn’t matter, or that it matters less than we think. Whatever impression we try to make with our apparel, God will see through it. A sonorous verse in the Hebrew scriptures declares that “the Lord sees not as man sees: man looks on the outward appearance but the Lord looks on the heart.” In Islam there is a hadith (or traditional saying) that God “does not look at your figures, not at your attire, but He looks at your hearts...” And Jesus of Nazareth tells his followers to be more like naked lilies growing in a field, free from worries about clothing and sustenance.

And yet clothing surfaces again and again in those religious texts, whether as a pitfall, an obligation or a symbol of the sublime. Both the Koran and the Hebrew scriptures explain that the need for clothes in the ordinary sense arose only after a terrible act of wilfulness which left man estranged from God, suddenly conscious of a nakedness that needed to be covered up. After the disobedience of Adam and Eve, as the most famous English translation of the Bible has it, “the eyes of them both were opened, and they knew that they were naked; and they sewed fig leaves together, and made themselves aprons.”

The Quran also implies that the drama and dilemma of our first ancestors’ disobedience recurs in every subsequent generation: “O Children of Adam, we have bestowed on you clothing to conceal your private parts and as an adornment. But the clothing of righteousness, that is best...Let not Satan tempt you as he removed your parents from Paradise, stripping them of their clothing to reveal their private parts.”

The idea that attire is a gift from God, and that it should be tidy and discreet, is emphasised elsewhere in the Quran. People should dress neatly and cleanly when going to the mosque. As one translation puts it: “O children of Adam, put on your finery at every place of prayer...Who has forbidden God’s finery which He fashioned for his servants, or the good things He has provided?” Modesty is enjoined for both sexes: believers should “cast down their eyes and guard their private parts” and women in particular should “drape their bosoms with their veils” and not show their beauty except to close family members. That last verse has been interpreted as an instruction to women to cover their heads, although there are some Muslim women who disagree. Women who convert to Islam often note that there is something paradoxically liberating about dressing modestly, in a way consistent with one’s beliefs, rather than feeling compelled to impress society or attract men.

In the Jewish and Christian tradition, it is often said that before their disobedience, Adam and Eve were robed not in ordinary clothing but in an all-embracing divine light. That in turn confers a special status on garments which indicate the restoration of that light. Brilliant white clothes, whether worn by a priest in the holiest part of the Jerusalem temple, or by an angel hovering over a river in Babylon, or by Jesus appearing to three followers in a blinding blaze, are a sign that this light is once again flowing unhindered. In the final pages of the Christian scriptures, the church awaiting God is compared to a bride “arrayed in fine linen, clean and white.”

Other clothes and adornments, in the right ceremonial context, are mentioned approvingly. The high priest in ancient Jerusalem displayed 12 precious stones attached to a breast-plate which incorporated threads of gold, blue, purple, scarlet and pale linen. It must have been an impressive sight. King Solomon’s magnificent appearance is mentioned with approval. But the Bible has harsh things to say about the who dress and groom themselves to make a worldly impression, like Jezebel who, in the final hour of her life, “painted her eyes, adorned her head and looked out of the window”.

At the heart of all theistic religions is the idea that the worship of, or excessive attachment to, anything or anyone other than God is something to be avoided: a sinful distraction at best, idolatry at worst. Applying that principle, it becomes easier to understand the apparent inconsistency of religious attitudes towards clothing. Apparel can either be an aid to worship or a foolish diversion from it. But surely the folly of “excessive attachment” applies not only to physical things but to rules. Getting hung up on what people should or shouldn’t wear in particular places sounds like an unhelpful distraction.