The Muslimah Pageant and A Few Other Things

Indonesia’s Miss World Muslimah beauty pageant was held quite recently. The participants of the pageant wore makeup, just like the Miss World or Miss Universe contestants. The difference is that this pageant reveals an especially narrow mindset.

In the Miss World or Miss Universe contests, the women can be from any country or religion, but in the Miss Muslimah pageant, the participants have to be Muslim, and are required to wear Hijabs. This is a beauty contest among women who are required to have their bodies and heads covered, if you hadn’t guessed. 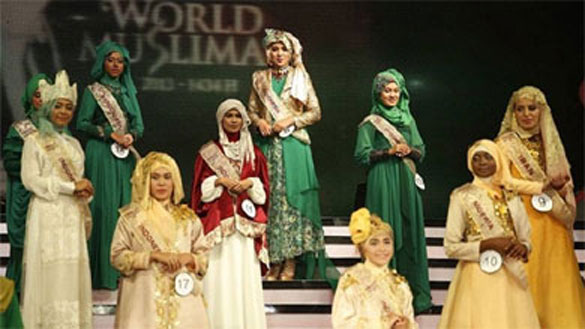 Modesty must be displayed

In Islam, the purpose of the Hijab is to make sure that no physical beauty of a woman is on display. The Qur’an and Hadith strongly prohibit displaying female beauty, which is why Muslim extremists have always been against beauty pageants. But have they expressed outrage over their own Muslimah beauty pageant? Not to my knowledge.

These Muslims, who doll themselves up and shamelessly display their beauty in front of all the men in the world, are definitely disobedient towards Allah and the Prophet, right? Not so long ago, a new law had been passed in Saudi Arabia: Girls with beautiful eyes were to no longer go outside with their eyes unveiled, because men get sexually excited by looking at their eyes.

Since men don’t know how to control their excitement, women are the ones who have to cover themselves up head-to-toe, just so that men are not tempted to do something horrible. However, the participants of the Miss Muslimah pageant keep their eyes uncovered. The curves of their waists, breasts, and hips are also clearly visible through their clothes – anyone can guess how much this excites men.

After watching the Muslim beauties, I came to the conclusion that Muslims do not want to be deprived of anything pleasurable. A few years ago, some expatriate Muslims living in Europe were cursing at non-Muslims there, all the while praising the Muslims in Saudi Arabia. So I asked them: “Why are you living in a non-Muslim country? You can just go to Saudi Arabia – the land of Islam, the sacred country.” They listened to my suggestion, but didn’t express any desire to follow through.

Muslims might think Saudi Arabia is sacred, but not many of them actually want to live there. Anyone can find clips of Saudi government-endorsed beheadings on the Internet. The truth is, Muslims can never enjoy human rights in the Arab world the way they do in the countries of non-believers.

Islamic extremists today are freely preaching their religion on Twitter and Facebook. Religious terrorists are using modern technology to spread terror. Fanatics are carrying mobile phones – an invention of the non-believers. Non-believers or atheists are inventing new technologies, and Muslims are all over those inventions.

Pious Muslims don’t have any objections about enjoying such modern conveniences. At the same time, they do not have any objections about hating non-believers or atheists, cursing and swearing at them, or even executing them while screaming God’s name. I have never seen any other religious group embracing the positive aspects of science and the negative aspects of religion in this way.

People have not only become greedy, they have also become violent. Not too long ago, followers of the Prophet used to say: “Allah’s favourite Prophet loved everyone, he didn’t hate anyone. He didn’t want to harm anyone, and he never said we should kill non-believers.”

He, in fact, said: “Your religion is yours, and my religion is mine.’” And now, many devotees of the Prophet proudly announce: “Our Prophet killed men, we will do the same ... We will also chop non-believers into pieces.”

If religion makes people intolerant and turns them into savages, then I question its relevance in modern society. A few days ago, Bangladeshi Muslims attacked a Rajshahi University professor, hacking him to death. His fault: He had told his female students to not wear Burqas in class because of the difficulty it posed in recognising a student. After all, it could be someone else pretending to be a student, maybe even someone dangerous.

The golden boys of my golden Bangladesh want to cover the girls in black garb. The Burqa is an Arabian attire; is it mandatory to accept the culture of Saudi Arabia as your own to be a Muslim, or can you accept your own culture and also be a Muslim? This is something I’ve pondered for years.

My mother was very religious; going to Saudi Arabia was a dream of hers, and she did eventually go. However, when she came back, I noticed that she wasn’t very fond of the country anymore. Maybe her idea of Saudia Arabia did not match the reality. Her love for that country was gone, and as long as she lived, she lived as a Bengali. It was her love and affection for people that made her great, not her religion – that is how she expressed her piety.

When I was looking at the various fashionable Hijabs in the Muslimah beauty pageant, it seemed like the Hijab was no longer a part of Islam. Eye-catching Hijabs of various colours are sold in shops now, and Hijabi girls are busy showing off their beauty in different ways, which is why special catwalks had to be arranged for them.

Groups of Muslims are taking part in a sexual jihad. These girls travel for miles to reach the desserts of Iraq and Syria, so that they can sexually please some unknown men. This is something that is impossible to imagine even for someone with no religion and no shame.

I often hear the phrase “Ghomtar Tolay Khemta Nache,” this time I am witnessing it myself. If Muslim extremists can slaughter people in the name of Allah, Muslim girls can also sleep with them for the same reason. It’s a good thing that my mother is not alive anymore. If she were here to see these things, who knows what would’ve happened to her faith.

Taslima Nasrin is a feminist writer and columnist currently in exile in India. This article has been translated from the original Bengali.