How Are Muslim Women Perceived in the West? 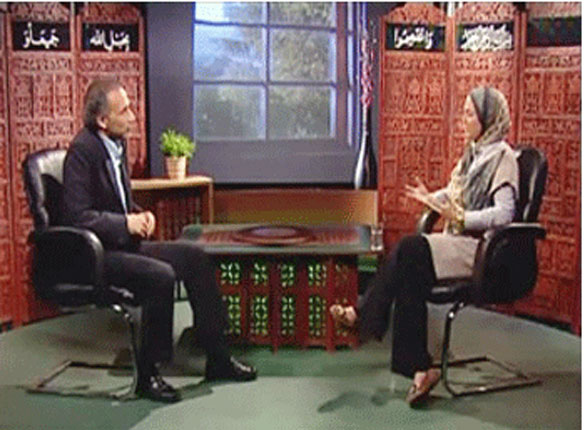 Dr. Tariq Ramadan in an interview with Sister Myriam Francois-Cerrah

Transcript of part of an interview conducted by Dr. Tariq Ramadan with sister Myriam Francois-Cerrah, media representative of the Oxford University Islamic Society, UK, in the weekly TV program “Islam and Life.”

In the interview, sister Myriam, herself a convert to Islam, reflects on the general negative perception of female Muslims in the West and compares that to the reality on the ground, in answering the central question of the episode:

How is the Female Muslim Perceived in the West?

Tariq Ramadan: When it comes to forced marriages, domestic violence, when it comes to the problems Muslim women face, financial autonomy, is this something you can say this is true or no, it’s not true?

How do you deal with this perception when people are saying it’s not a perception; we have facts here?

Myriam Francois: Well, they are right. There are facts. In the Muslim community these things do happen. The question is, is that the Islamic way or is it the reflection of a cultural parameter, or is it a reflection of a very over-patriarchal culture in which we do afford a minority-status, or worse than that, child-like status, to women, and remove any agency from them. And I think those are very real problems. The question is: Does this concord with the Islamic view on these things?

Tariq Ramadan: So explain that, because it a critical question here.

Myriam Francois: Of course. I always say whenever I discuss issues to do with women that my biggest critique to fellow women is a lack of knowledge of their own faith.

Tariq Ramadan: You speak about Muslim women not knowing enough about their religion?

Myriam Francois: Yes absolutely, and it is one of the things that I feel saddest about when I work in the community is meeting women who believe as they were the hype that they are fed by some of the men within their community.

Tariq Ramadan: So give me an example, because some people say that it’s all good, but, referring to text, it is very theoretical, not a practical example.

Myriam Francois: I think one of the examples would be something like forced marriages. There are very clear sayings of the Prophet, peace be upon him, which say a marriage between a girl and a man when the father has organized it without the daughter's consent is annulled.

You couldn’t possibly get it any clearer than that. And that is just one saying, and I have read many others along those lines. So we couldn’t be clearer in the text. The question is when you get to the community that many of these young girls don’t know very much about what the text itself says. Many of them often- and this is a critique perhaps of Islamic education generally, learn to read the Qur’an without necessarily understanding it and that it has relevance to their day-to-day life. So Islam then ends up being something very distant from their lives, and it ends up being something quite restrictive because it is someone from the outside telling them what they should be doing.

Tariq Ramadan: Yes but on this, this is where we would like Muslim women to be. You know I’m always repeating don’t play the victim, because this victim mentality becomes more assertive. So, for example a few years ago we launched a European campaign against forced marriages saying it’s not Islamic. And we wanted women to be there and men, because sometimes it’s also with young boys.

But the point is very often we are on the defensive, so we come talking about the headscarf, modesty. We spoke about force marriages, domestic violence. But why don’t we have women coming and saying, and this is a critical and crucial question, financial autonomy for example? It is within the society that we have the personal, the individual; the woman as a being recognized and acknowledged as such by Islam. It is a feminist claim that we need to have now; the same skills, the same salaries, their right to be on the job market, etc. We don’t hear Muslim women enough on this, coming with such assertive things.

Myriam Francois: I agree, and I think actually anyone who has read Virginia Wolf "A Room with a View “and her view that a woman can't be fundamentally free until she has her own room and her own money. And actually Islam affords you those. It affords you principally the knowledge that you have a home that has to be provided for you, and the knowledge that your money is your money. You have no financial obligation in financing your family. That said, I always like to add the caveat that not being obligated doesn’t mean you should never obviously contribute if they are in need. And I do know there are examples of women who have money in the bank and whose family are in need and say no, I shall never use it. We have to be flexible here in the way we understand things.

Fundamentally, Virginia Wolf, going back to early feminism here, there is this demand for financial autonomy, and a source of respect for women as women as opposed to an appendage to a man.

That’s one of the really basic feminist claims. And actually in Islam, from the beginning there is a recognition of women as an independent status. One example obviously is that you don’t take on your husband’s name.  One of the feminist contentions in the West was that you became defined by your husband and your family. Your entire identity wa subsumed by the family.

And although this is also an issue within the Muslim community, I don’t think it’s a problem in Islam because I think Islam very much affords women such a freedom, that area to be herself independently.

Tariq Ramadan: That’s very important because it helps to change this perception. We need it to reach out to fellow citizens in the West to be able to change this perception. If you come back to the Muslim communities now and try to think about their state of affairs and what are the problems. We still are dealing with problems within. What are the main problems that you see as a Muslim woman?

You are living with this community and you are telling me that you are going to these communities and you feel there’s a gap between what you are saying and what you are projecting as a Muslim woman and experiences on the ground so you want to change the perception and for a solution for the future we have to come to this. I’m still dealing with as I’m always repeating that the most important problem for Muslim woman is men. And they are understanding what you are saying.  If you have to prioritize, what are the main problems that you see?

Different Mindset young girls are not raised with very many aspirations.

Myriam Francois: I think for me the most fundamental one is education. The reason I say education because education is the key to so many other worlds. So one of the key issues that we do see in the Muslim community across the UK, and I think it may be common across Europe, but I’m less familiar with the rest of Europe, is the issue that young girls are not raised with very many aspirations.

So the school is seen as something they have to go through. It’s a legal requirement, but at the age of sixteen they are raised with this idea once you reach maturity- physical maturity, which is around the age of sixteen, you will leave school, and you will become a wife. And becoming a wife is truly your goal in life. This is what you should be aiming for, and fundamentally this should be your life objective.

It’s not to say that being a wife is not a fulfilling role, and it’s not to say that being a mother isn’t a fulfilling role, but I think that fundamentally without education, so that you know you have a profound awareness of who you are as a person, without education you have much less to contribute to that unit. And certainly you would have less awareness of what an ideal relationship would be for you.

Tariq Ramadan: So education would be the first. What else?

Myriam Francois: After education, I mean connected to that would be insuring that you are more active in the public sphere, so that making your faith a lived faith, so that the values that you develop in the mosque- and this is the big thing I always talk about that it’s great to nurture the values within the mosque, and let take them out. Let’s make them a lived reality so that they can shine for everybody to see. Islam fundamentally is a message for the whole of mankind. The Prophet, peace be upon him, was a mercy for the whole of mankind. And that message has to be universal, it has to be applied by us in a universal fashion.

So, we take the values, and modesty is one example that I was talking about earlier, in an environment in which women self-esteem is completely or very much dependent on this male gaze. I think there is a very empowering concept to women saying: ‘You know what? Forbid this male gaze. Cut it off. I will not allow you to judge me on my physique, on the sexual elements of my being. I will enforce that you have to judge me on the same criteria upon which you are judged; on my morals, my virtues, on what I have to say for myself.