While Canada has been embroiled in the controversy surrounding Quebec’s plan to outlaw the Hijab as a headdress for its Muslim public employees, across the pond in the UK, it’s the Niqab, — a full-face mask worn by some Muslim women — that is creating a storm. 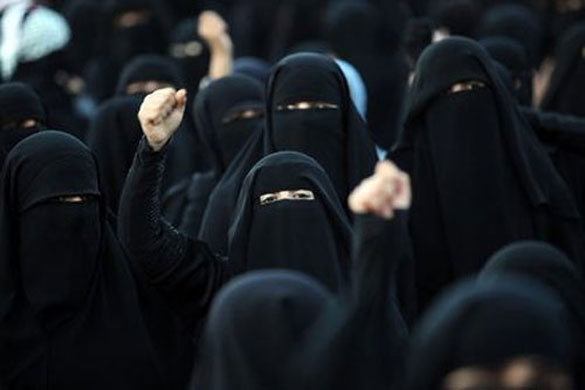 On Monday, a British judge at London’s Blackfriars Crown Court ruled a Muslim woman known only as “D”, who was facing charges of intimidation, would be allowed to attend her own trial wearing a full-face mask.

In a ruling that shocked Britain, Judge Peter Murphy admitted that concealing the face would “drive a coach and horses through the way justice has been administered in England and Wales for centuries.” Yet he apparently gave in to the religious blackmail employed by Islamists, who fling allegations of racism and Islamophobia at anyone who dares criticize this medieval misogynist practice being introduced throughout the West in the name of Islam.

To satisfy critics of the Niqab, the London judge added a meaningless compromise.

He ruled that if the accused took the stand and gave evidence, she would have to remove the face mask and show her face to the jury.

He wrote, “If the defendant gives evidence she must remove the Niqab throughout her evidence.” The operative word being “‘if”.

The fact is, people accused of criminal wrongdoing have the right not to testify, thereby avoiding cross-examination by the crown, and many accused avail themselves of this right.

Thus, for all practical purposes, the accused woman in London may never be seen by anyone, whether she is found guilty or innocent.

In reaching his decision, Judge Murphy relied on the recent Supreme Court of Canada decision involving a Muslim woman identified only as “NS”, who, as the complainant in a sexual assault trial, had refused to take off her Niqab in court.

At the core of the cases involving both the accused “D” in Britain and complainant “NS” in Canada, is the women’s claim that masking their face is their religious obligation and as such a fundamental right.

Nothing could be further from reality, though no non-Muslim has as yet had the courage to call the bluff of Islamists who employ the Niqab (and Burqua) as a political symbol, a sort of a middle finger to the West.

As the Muslim Canadian Congress said in 2009, “there is no requirement in the Qur’an for Muslim women to cover their faces. Invoking religious freedom to conceal one’s identity and promote a political ideology is disingenuous.”

No less an authority than Egypt’s late Sheikh Mohamed Tantawi, dean of al-Azhar university, stated the Niqab was merely a cultural tradition and that it had no connection to Islam or the Qur’an.

If there is any doubt about the religiosity of the Niqab and Burqua, one should take a look at the holiest place for Muslims, the grand mosque in Mecca, the Ka’aba.

For more than 1,400 years, Muslim men and women have prayed in what we believe is the House of God, and for all those centuries, female visitors have been explicitly prohibited from covering their faces.

It’s time to take the veil off the lies Islamists tell and to ban the Niqab and Burqua from all public places.

And finally, to use them as a reference point for students studying the effects of brainwashing.