Talking about Saudi Arabia, international reports and analyses usually raise the issue of Saudi women being deprived of their rights.

In fact, these reports and analyses are written in accordance with the western perception of human rights that they think are suitable for every country. Unfortunately, that is not correct. Social, traditional and religious values play a role in determining the rights and responsibilities of individuals in every country. Those who write reports about rights deprivation in Saudi Arabia do not understand our society and traditions. 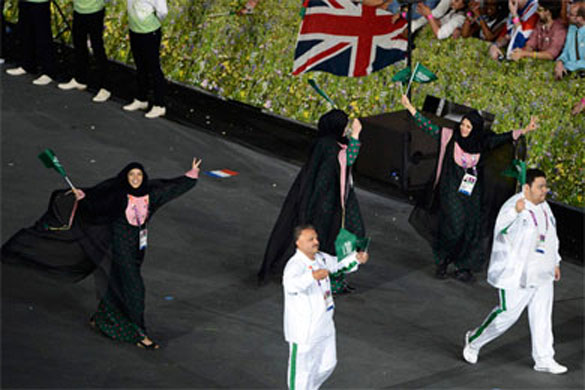 This year Saudi women participated at the 2012 Olympics for the first time.

We can also say that women in the West are treated as subordinates to men. We all remember the feminist movements that advocated women’s freedom but fizzled out because their noble cause was hijacked by human traders who exploited women as sex commodity. There are many examples to support our claim.

What the initiators of these subjective reports do not understand is that every society has its unique system; as such we can’t tailor the Western standards to fit our society.

These people must also understand that our religion gives due respect to women and protects their rights and dignity as human beings. We acknowledge that there may be malpractices and they are because of the wrong application of rules by some ignorant people.

To those who do not know, we say Saudi Arabia has unique societal conditions that are not limited to our women, but to all classes of the society. However, we cannot deny the fact that we are not an ideal society. We have problems and conditions that need to be addressed and solved. But what is more important is the correct assessment of the problem without exaggerating or belittling it. In other words, we have to take into account the whole picture — to see the forest and not only a few trees.

As such, when we deal with any problem we should do so by taking into consideration interests of the society as a whole and not the interest of one party at the cost of others. This is our logic when dealing with the issue of Saudi women.

Before considering any idea or suggestion, we try to improve women’s conditions to make the whole society productive and enable our women to help themselves and the society.

There are some issues that prevent Saudi woman from playing a major role in society. These include the nature of the woman and how she wants to be seen at home and abroad. We have to admit that the Saudi woman is an active and positive member of our society and that she has proven herself in many fields, including education, workplace or in other activities.

However, negative portrayal of women affects their condition. Unfortunately, Arab and the foreign media present Saudi women as backward, lacking human qualities and violating customs and traditions. These negative stereotyping has sullied her image. The good thing is that the Saudi society has rejected these and is countering the practice to protect the integrity of women. There are women who take to media in a way not in accordance with their tradition or religion.

Personally, I do not object to women presenting themselves on the media, but I reject their claim that they represent the typical Saudi woman. What I am calling for is not to ban these women from appearing on TV, but to show the other picture of Saudi women.

What is needed is that women should play their role in demanding their rights, diversify their methods, accept what is possible and wait until the society is convinced with their demands. Take the issue of car driving, for example. In fact, there is no law that prohibits women from being behind the wheel, but it is a widely accepted norm that they don’t drive. As such, women should accept simple things. First they should be allowed to drive in certain conditions such as taking their children to school or sick family members to hospitals. This is a wise thing women could do at this stage. Being stubborn won’t support their cause.