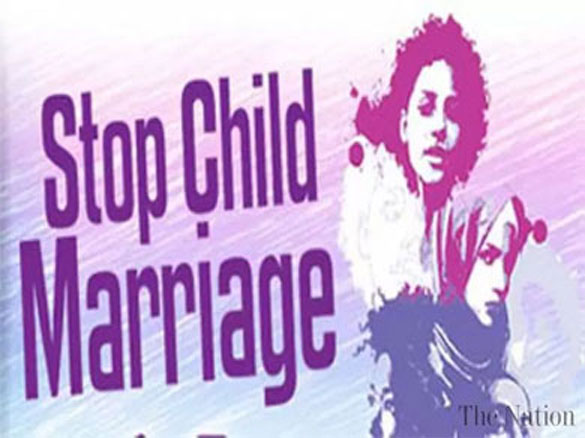 A recent move by the Government to allow child marriage is tantamount to excluding many Bangladeshis from the benefits of growth and development. Women are likely to become the main victims of the recently enacted Child Marriage Restraint Act-2017. It allows a Bangladeshi boy or girl to get married before reaching the minimum age limit – 18 for women and 21 for men – as stipulated by an act in colonial India. What the Parliament enacted on February 27th – paradoxically, in the name of restraining child marriage – signalled an obvious departure from the Child Marriage Restraint Act of 1929, and its modified version, the “Sharda Act” of 1930, which fixed the minimum age of marriage for girls at 18, and for boys at 21.

While the justifications for the Act are phony, fallacious, and at best speculative, it’s in fact a regression therapy, a means of escaping certain anxieties. Even worse, it’s a childish attempt to appease people who promote patriarchy and misogyny. They not only include obscurantist Islamic and Islamist forces, but also some so-called progressive elements in society. The other day, one politician – formerly “left-oriented” and “progressive” – justified the marriage of under-age girls to their rapists, for the sake of defending some weird social order. Islamist groups like the Hefazat-e-Islam, who are hell bent on demolishing a harmless statue in the premises of the Supreme Court, also defend the Act in the name of defending Islam and Shariah.

Unfortunately, many Bangladeshis believe child marriage to be the only solution to the problems of rape, abduction, illicit sex, and pregnancy of unmarried girls. Some Muslims not only believe child marriage is permissible, but they also consider it desirable as a “tradition” of Prophet Muhammad (pbuh). They don’t know there’s no theological justification for child marriage in Islam. Contrary to the popular myth, the Prophet didn’t marry a seven- or nine-year-old Ayesha; she was at least 18 (or even older) at the time of her marriage. There’s absolutely no historical validity of the myth about “Ayesha’s Age”.

Now, let’s look at the extenuating situations that warranted the legislation, presumably for the “best interests” of under-age girls in Bangladesh. To the proponents of the Act, protecting adolescent pregnant girls from shame and ostracism for life were the main rationale behind this law. They ignore the fact that child marriage is responsible for millions of girls’ dropping out of schools, suffering incurable diseases, and dying prematurely.

Shockingly, all the female politicians in the country favoured the legislation. Meher Afroze Chumki, the State Minister for Women and Children Affairs, who tabled the Bill said the Government was committed to stop child marriage, and the Act was essential to ensure this! Rebeka Momin, chief of the Parliamentary Standing Committee on Women and Children Affairs, told news reporters: “There was no alternative to keeping the special provision considering the socio-economic reality, especially in rural areas.”

So far only a handful of people, mostly women representing women, human rights, and development organisations, have held public rallies in Dhaka protesting enactment of the Child Marriage Restraint Act-2017. As if it’s only a women’s issue, having nothing to do with human rights, equal opportunity, and human dignity in Bangladesh! Unless cross sections of the people, politicians, intellectuals, professionals and others organise mass protests and mobilise public opinion against the Act – paradoxically named as “Child Marriage Restraint Act”— it would further erode the vestiges of human rights and civility in the country.

As Maher Sattar and Ellen Barry have argued (“Bangladesh Weakens Longstanding Law Against Underage Marriage”, New York Times, Feb. 27, 2017), this Act “could roll back the country’s decades-long campaign to curtail teenage pregnancy and maternal and infant mortality”. The authors reject the unconvincing arguments that the Act was “necessary to save pregnant teenagers from social ostracism”, as opponents of the Act argue that teenagers in conservative rural Bangladesh “rarely become pregnant unless they are married”; and that in 2015 “fewer than 1.5 per cent of underage marriages took place after the girl had become pregnant”. What’s disturbing that in 2014, the Government had already tried to reduce the legal age of marriage from 18 to 16. The Act legitimises what conservative Bangladeshis believe: “when girls get educated, they become bad women and have trouble finding a husband”. Sattar and Barry believe the Government is courting conservative Muslim electorate and the Hefazat-e-Islam. Welcoming the Act, one top leader of the Islamist outfit said: “In the eyes of Islam, this is the correct decision. Having a law that you cannot get married before a certain age, this I cannot agree with.”

This Act, in short, grossly violates the Constitution, which guarantees equal rights and opportunities for all Bangladeshis irrespective of their ethnicity, socio-economic position, gender, and belief systems. Seemingly, neither the state machinery nor the society at large can do anything about stopping the surge in violent crime and human rights violations, especially rape and abduction of women. Instead of ensuring the rule of law, especially the protection of girls from sexual harassment, rape and abduction, this Act has virtually established the well-known fact about the poor state of law enforcement in the country.

It’s unfortunate but true; Bangladesh during the last two decades of British rule had more civil and political rights, more democracy and freedom, than what prevails today in the wake of independence. In view of the support for child marriage among sections of politicians and intellectuals in Bangladesh, it seems culturally Bengali Muslims haven’t changed much from their predecessors in the 1920s. I cite a folk song from rural Rangpur composed year before the enactment of the Child Marriage Restraint Act of 1929. The “Hefazat mindset” isn’t that different from what we get in the song: “From next year onward, you won’t be allowed to marry off your sons unless they grow beard, and girls become shapeless and unattractive. So, marry off your children this year. Henceforth, while promiscuity will reign supreme, nobody will get virgin girls as brides anymore.”

So far as the mindset of people who justify marrying under-age rape victims to their rapists is concerned, it’s not that different from that of the mullahs who dispense similar judgments in the Salish courts of rural Bangladesh. To conclude, marriage is a sacred institution, a life-long commitment between two individuals; not an anti-dote to rape and illicit sex, let alone a reward for rapist men. Bangladesh needs the rule of law against rape, abduction, and sexual harassment of women, not child marriage – which is a regression therapy, not an efficacious cure.

Taj Hashmi teaches security studies at Austin Peay State University. He is the author of several books, including his latest, Global Jihad and America: The Hundred-Year War Beyond Iraq and Afghanistan