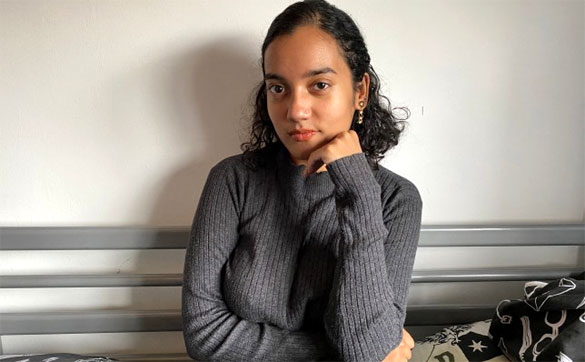 I hated feeling as if my identity was a beacon of hate (Picture: Sumaiya Ahmed)

You’d think growing up in a predominantly Asian area in London would mean not having to deal with racism and Islamophobia. But as a British-Bangladeshi Muslim, I can say racism in this city runs deep. The mark it leaves behind lasts forever and can even drastically change the way you live your life.

When I was 10 years old, my cousin and I were called ‘P***s’ by two white boys and a man outside a block of flats as we were on our way to Tesco. At this age, neither of us knew the awful connotations of the word; we just knew it was bad.

When I was 11 years old, I started wearing the hijab in public, and the following year, while on my way home from the mosque, an older white man called me a ‘terrorist’.  I remember feeling my heart pound in my chest and my mouth go dry. I sped up and walked faster to get away in case he decided to turn around and use more Islamophobic abuse. I was fully covered – dressed in a hijab and Abaya – with the Quran held in my arms since the mosque I went to was pretty local.

I clutched the Quran closer to me, seeking comfort in the words from God. The fear I felt at the thought of it escalating was debilitating. I practically sprinted the rest of the way home, rushed through the front door and instantly told my parents what happened.  ‘I was called a terrorist,’ I said to them. Neither of them spoke English, but they knew the meaning of the word and they knew what it meant when used to abuse Muslims.  They didn’t quite know what to say. They couldn’t tell me to take my hijab off, or to not go to the mosque.

These were the basic foundations of Islam and my religion was heavily part of my identity. I loved wearing my hijab. Being called a terrorist in a place I grew up and considered home made me feel alienated. Every time I left the mosque, I would walk as quickly as I could and never made eye contact with anyone to avoid getting unwanted attention. I hated feeling as if my identity was a beacon of hate and it even made me question whether I really wanted to wear it or not. Maybe it would be easier to take it off. I didn’t though. I decided against it because the hijab was a symbol of my faith, my identity, and I didn’t know how to be without the hijab.

As time wore on, I began to put this fear of wearing the hijab aside. This was just one white man who verbally abused me. I could get over it. I loved wearing my hijab. I felt comfortable in it and it became a part of the person I was.

For years, the hijab meant the world to me. I even remember, in year four or five, crying one day when we unexpectedly stayed with my aunt for a few days and I forgot to pack scarves to wear to school. My aunt lent me one of her triangular scarves that I found super hard to fold, but at least I had a hijab on.

And then it happened again when I was 18 years old. As I was leaving the train station, a man called me a ‘terrorist’, but this time I was going to do something about it. I yelled back, ‘Speak up if you have something to say’ but he didn’t and just kept walking on.

It wasn’t until the Westminster attack that I started to truly feel that perhaps wearing a visible marker of my faith was making me feel unsafe. Following the attack, my parents told me to wear a hoodie over my hijab to try and hide the fact I wore it.

I also saw stories flooding social media about anxiety from Muslim women fearing getting pushed into the train tracks and facing an onslaught of Islamophobic abuse – a feeling I found myself echoing. I’d stand as far back as I could from the yellow line to practically press myself against the wall, always keeping an eye out for everyone who walked past or stood near me. This fear was a part of what ultimately led to me taking my hijab off. My decision to stop wearing my headscarf wasn’t easy but I felt like I had no choice. The first few days and weeks without the hijab felt weird

There was an increase in Islamophobia after the terror attacks, not to mention our current prime minister’s previous comments about women in Niqab and Burqas looking like ‘letterboxes’ and ‘bank robbers’.

At the time, I also felt personal struggles in my faith. I was questioning Islam and the rules I had to adhere to as a Muslim. I wholeheartedly love my religion, but I found aspects of it sexist and misogynistic – like how women weren’t allowed to travel without a mahram (a male member of the family with whom marriage is forbidden) or marry a non-Muslim man, whereas Muslim men can marry non-Muslim women.

After I took my hijab off for the first time in 2016, the Islamophobic comments and stares stopped. I found myself feeling safer from Islamophobic attacks without it, but still fearing racist abuse. The first few days and weeks without the hijab felt weird, but also strangely nice – I enjoyed feeling the wind in my hair. It felt like another part of me had woken up from a long slumber. But I wish it didn’t have to come to me taking my hijab off to feel safe. I’ve become so used to not wearing it all the time now, that I feel more comfortable, and out of harm’s way, without it. The thing is though, I felt too weird to ever actually come out and tell my family ‘I don’t wear the hijab all the time’ – it felt like a sign of weakness and lack of faith, as if I was letting the fear win.

I’m sure they suspect I no longer wear it everywhere I go, but nobody’s ever really said anything. I do still wear it sometimes because I don’t think I can ever commit to fully taking it off. At family events, weddings and parties, I have the hijab on and sometimes when I go out shopping. I have a bit of an on-and-off relationship with the hijab. It is still a part of my identity as a British-Bangladeshi Muslim woman.

I truly hope I can go back to wearing it and feel safe, and comfortable, when I do, instead of being petrified of what could happen and fearing the worst. But I will never truly feel safe until we as a society recognise and challenge Islamophobia whenever it happens.

This starts at the very top with Boris Johnson. He’s since apologised for ‘any offence’ that he caused with his ‘letterbox’ and ‘bank robbers’ comments but he can’t go back and change the fact that there was a ‘significant spike’ in anti-Muslim hate crimes after he made the ‘letterbox’ comment, according to charity Tell MAMA – a charity supporting victims of Islamophobia.

He still hasn’t properly acknowledge the dangers of this comparison. At the end of the day, we’re British citizens and should be able to feel safe in our own country – whether that be on train station platforms or while walking home.

The dark and dangerous reality of racism in sex work Muslim women bear the brunt of anti-Islamic attacks and the effects are detrimental. We need more education about religion in school curriculums as well as inter-faith dialogue to help properly combat these hate crimes. Education is key to reforming the vicious cycle of racism and Islamophobia. Experiencing Islamophobia throughout my life has forced me to be more vocal in my adulthood about these injustices. It’s a shame I don’t feel safe or comfortable in my own country to dress or act how I want in public, but only through speaking out about our injustices can we start to bring them into the light.

Original Headline: I stopped wearing my hijab because I was scared for my life