Shaheen Bagh Model: Hand Over the World to Women — We Will Make It A Far Better Place

The energy levels at the Park Circus Maidan in Kolkata were infectious and compelling. For the three days that I spent in the City of (limited) Joy, I passed the venue of the ongoing protests against the CAA and NRC. As in other cities of India, this one in Kolkata was also vociferously led by women, who had taken over the space in front of the Masjid. I watched the numbers growing, and the decibel levels rising each time I passed. But was disappointed by the indifference of the rest of the city to what is a very important platform, driven and inspired by women across India. 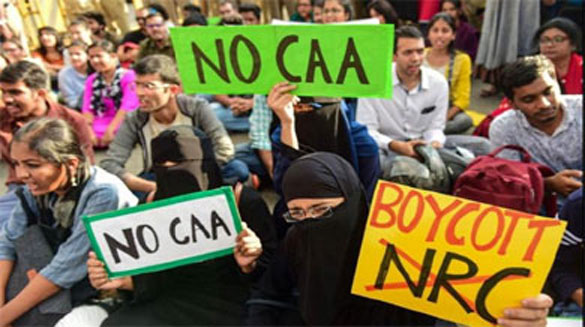 For the three days that I spent in the City of (limited) Joy, I passed the venue of the ongoing protests against the CAA and NRC.

Delhi’s “Shaheen Bagh model” is being efficiently cloned from Lucknow, Bengaluru, Mumbai, Prayagraj to Kolkata. How is this happening? Who is orchestrating it — cynically assuming there are dark forces at work, urging thousands of women to leave their homes, husbands, children and do without food, water, bathroom facilities or blankets during the cold winter nights, only to please political mentors. This is a deep insult to the protesting ladies. And one must challenge it forcefully. I told myself I had to visit the maidan just to get a better understanding of what was underfoot.

The light was fading when I reached the venue. My driver Somnath had no idea what I was talking about when I requested him to take me to the “mahila andolan in the maidan”. He drove in the opposite direction and pointed to a corner of a maidan where locals were enjoying a late evening stroll and Kolkata’s famous street food and said brightly, “This is the andolan spot.” I pointed out that there were no protesters present and asked how come he didn’t know about the “other” andolan? He shrugged and said, “In our city there is always an andolan going on somewhere — you should have been more specific”. Oh oh… so, it was my bad! Chalo… we took a U-turn and headed towards the right maidan and the right andolan. He said, “I will drop you off at a distance… you walk from there… don’t want any trouble”. With that said, he sped away. I went towards the loudspeakers and waded through a wall of men who had formed a ring around the ladies seated on the ground and raising slogans non-stop. There was zero jostling as I made my way to the ropes protecting the protesters. I was instantly embraced by one of the organizers — an articulate lady who welcomed me warmly and asked me to take a seat. At that point, I could see waves of men and women waving the tricolour as they came to the venue from several directions. The atmosphere was peaceful and orderly. I heard a little boy (around 10 years old) urging the crowd to join him as he raised slogans — the response of “Azaadi” reverberated across the grounds. Once the boy had shouted himself hoarse, several ladies of all ages lined up to take the mike. Some read poems, others sang patriotic songs, while a few encouraged co-protesters to stay motivated and not give up the struggle. One of the women told me there would be 10,000 ladies staying the night. My question was simple — I hadn’t spotted any bathrooms. The woman told me most of the protesters stop drinking water once they get to the venue because of this issue. There was a kidney failure patient present, and others with different ailments. I saw mothers and grandmothers with infants in arms, huddling together and eating biscuits. “Daughters-in-law cook food for the elderly ladies and send it in the morning. The men of the family help as well.” There was no aggression.

I had not informed anybody about my going to the maidan… and it didn’t matter. To be there was enough.

When I left the venue, I was on a strange high myself. I called my children, who naturally responded with concern, “Are you safe?” A few close relatives in Kolkata wanted to know if I was “scared”. Scared of what? My own people staging a peaceful protest? That is exactly the sort of response all the protesters are trying to combat. It is the typical reaction to street protests across the world. “These people are reckless and dangerous. So are the police. Anything can happen — stampede, stone throwing, water hoses, pellets, lathi charge, arrests…” All true. Anything can happen. But it doesn’t have to. Peaceful protests are a citizens’ only hope of getting their voices heard. One need not agree. But in today’s volatile times — it is impossible to stay aloof. It is not surprising to note that these recent protests are being led by women. This is a significant development and pretty unprecedented. It is easy to dismiss off the protesting ladies as being “puppets” — as if women have no minds of their own or are incapable of thinking for themselves. When some media folks picked up an image or two of my presence at the maidan, the text commented on my “posh” appearance and completely missed the point. I am used to it by now. Even so, I did feel an opportunity to analyse what is a nascent women’s movement demanding political accountability, was frittered away by focusing on my everyday, non-designer clothes.

When women lead the charge, the dynamics are radically different. It is time to pay attention to what women are saying, whether at Shaheen Bagh or Lucknow’s Ghanta Ghar or Bengaluru’s Town Hall or Kolkata’s Masjid Maidan or Mumbai’s Agripada. During a lively session (a part of the just concluded Apeejay Kolkata Lit Fest), held on the grounds of the “posh” (that word again!) Tollygunge Club, our first rate moderator, Sandip Roy, asked three of us women on the panel for an edict we would pass if we had the power. I said, “Hand over the world to women — we will make it a far better place”. I wasn’t joking.