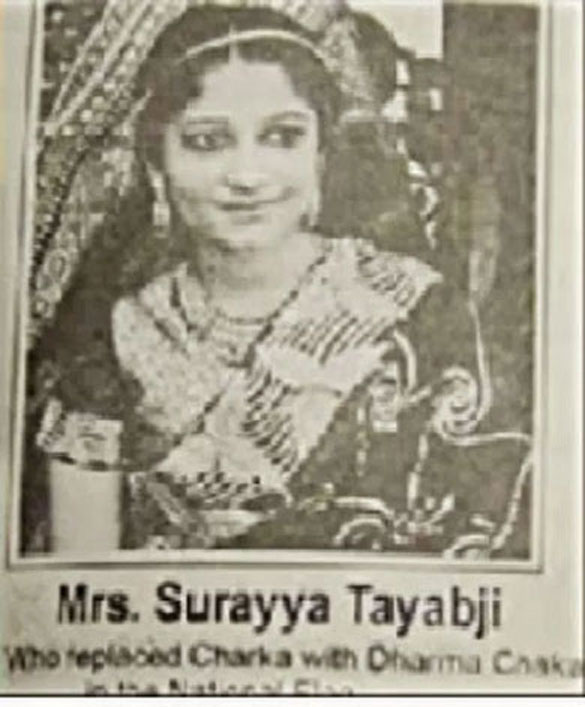 When the people of the country hoist flag and celebrate ‘independence ‘they rarely think about the woman who was responsible in designing the flag. The Hindutva forces rarely acknowledge the contribution of Mohd Iqbal whose famous lyric ‘ Saarey Jahan Sey Achcha Hindustan Hamaara ‘ rings in the ears on every Independence and republic day. Allama Iqbal is said to have translated ‘Gayatri mantra’ into Urdu by the name ‘Aftaab’ which is similar to ‘Surah Fatiha’ (first chapter of Quran) and is lost.

Surayya Badruddin Tayyabji ( Ali) was born in 1919 in Hyderabad ( AP, now capital of Telangana). She was the daughter of Aamir Ali and Leila Hasan Latif. Her father Badruddin Tyabji was involved in Indian national Congress and worked towards women’s emancipation. She was an artist and a designer. She passed away in 1978 in Mumbai.

Recent research by Capt. L Panduranga Reddy proves that the India flag designed by Pingali Venkaiah of Vijayawada is only half truth. The flag evolved over several decades of the freedom movement. Even Venkaiah implemented the ideas of Lala Hansaraj and Mahatma Gandhi.

In 1921, a Congress volunteer (Pingali Venkaiah) presented a design of a flag to Gandhi which he passed on to the working committee. According to Bhogaraju Pattabhi Seetharamaiah, the issue of flag was discussed for the first time in Calcutta Congress session 1923. In his book Congress Charita, he mentions that Charaka was added to the flag but does not mention the name of the actual designer once.

An erudite English historian Trevor Royle in his book ‘the Last days of Raj’ reveals that the final national flag was made by Surayya and the flag was approved on July 17, 1947 in PM’s office.

Surayya is the reason that saffron, white and green colours fill us with patriotic admiration. As the historian wrote ‘ … Originally the tricolour was to have contained the spinning wheel symbol ( charkha) used by Gandhi for his party symbol ….after much persuation Gandhi agreed to the wheel because Emperor Ashoka was venerated by Hindu and Muslim alike ..’ . The credit goes to this great Muslim woman of Hyderabad.

It is high time we appreciate her effort in designing our flag .

Sheshu Babu is a writer from anywhere and everywhere