It was fitting indeed that Malala Yousafzai addressed the United Nations during the first third of Ramadan. The month’s first 10 days are regarded as the days of God’s mercy.

While her powerful speech left an indelible mark on the world, her words served as a powerful reminder to Muslims worldwide about mercy, the fundamental tenet of their religion. She began her speech with the invocation of God the most Merciful, and it was masterfully woven throughout her brief but eloquent discussion of five important themes: inclusiveness, non-violence, forgiveness, education and female self-reliance. 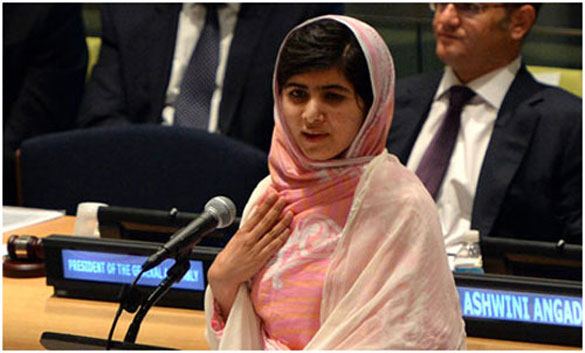 Malala reminded us that mercy is at the heart of the message preached by the Prophet Mohammed, Jesus and the Buddha. This serves as a powerful rejoinder against those who preach violence between faiths. It should provide impetus to the silent majority to take an assertive stand against the hatred that threatens to tear apart society’s very fabric.

She invoked the names of Nelson Mandela, Martin Luther King and Muhammad Ali Jinnah, reminding Muslims to look beyond their own sphere to the vast expanse of universal principles embodied by the many rich strands of humanity. That she acknowledged Jinnah, the founding father of Pakistan and a Shiite, should give special pause considering the dangerous Sunni-Shia schism that threatens to inflame tensions in Pakistan and elsewhere in the Muslim world.

And she reminded us that the most profound changes have occurred not through armed jihad, but principled non-violence, as embodied by Gandhi, Bacha Khan (an ethnic Pashtun who mounted non-violent opposition to the British Raj in India) and Mother Teresa.

History will add Malala’s name to this illustrious list of individuals who see beyond the immediacy of revenge, reaching deep into the recesses of the heart to forgive one’s enemies. She told the world that she learned compassion from Mohammed (the Prophet of Mercy) and forgiveness from her parents. This, too, serves as a stark reminder to Muslims about the importance of forgiveness and compassion, considering the tumult in so many Muslim societies.

She then reminded us of the supreme importance of knowledge. During Ramadan, as Muslims spend more time with the Koran (literally, “The Reading”), we are reminded about the importance of knowledge and literacy in building individuals, societies and civilizations. Malala reiterated the call of another courageous Pakistani woman, Mukhtar Mai, who was gang-raped as part of a twisted tribal custom.

Like Malala, Ms. Mai called for more education (including for the children of those who attacked her), emphatically stating: “I want to kill illiteracy.” It’s high time for Muslim societies to realize that their most vital asset isn’t oil or arms, but people. Investment in education pays off. It also threatens those who seek to control others. Knowledge is power, and the powerful know it.

Finally, Malala said what so many women have felt instinctively: “We will do it for ourselves” – an echo of the classic Aretha Franklin/Annie Lennox anthem. This is a challenge to those who wish to control women, who see women as mere children in need of male guardianship. It is also a challenge to Muslim women to take stock of their potential, take charge of their own agency and loosen the reins of dependency.

Malala has provided the world with inspiration through her example. Let us follow in her footsteps, and replace weakness with strength, fear with courage, and hopelessness with power in our own lives. Imagine the difference we can make.