Move over Superman, your Behaya (shameful) open face is what caused your defeat in the hands of Doomsday! Had you been wearing a proper Hijab like the one Batman and Zorro wear, (and your underwear on the inside) you would have been undefeatable. In fact, even Kryptonite would have shrivelled up and melted in the corner of the phone booth because of that all-powerful Hijab! 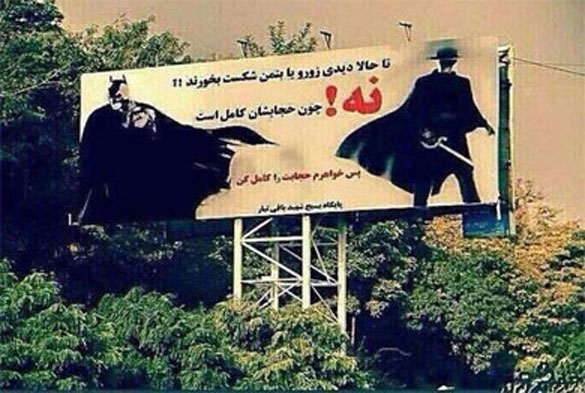 What Hijab is this? Well, Iran recently erected a billboard, which stated, “Have you ever seen Batman or Zorro getting defeated? No! Because their Hijab is proper. So you too mind your Hijab sister!” So pretty much the wisdom behind this genius is that if women wear a hijab like Batman and Zorro, they will never be defeated.

Wait a minute; is the Iranian Government showing their cool side by asking the women to dress like men or are they just saying cross-dressing is cool? I am sure DC comics think this is a wonderful idea as well or rather they will when they see the poster.

Will they soon follow with a Bane mask too? I mean, in that costume, just the eyes are visible. House of Saud, are you reading this?

Here is another Superhero inspired picture from Iran, where the fighters while having learnt a deadly talent, do it dressed up as The Penguin. Hey, he was Batman’s enemy, so this fits. Totally. 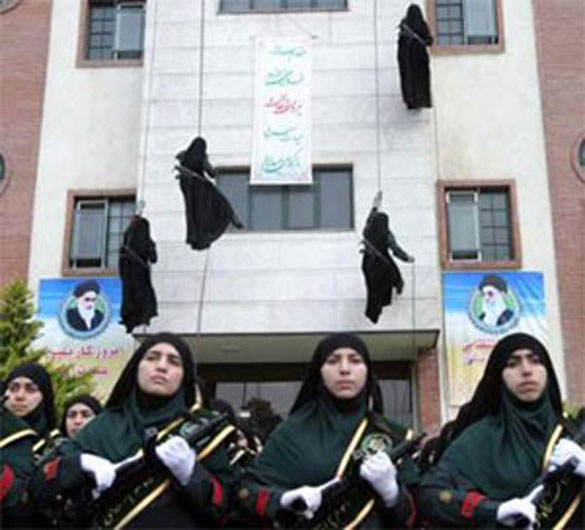 Jokes aside, Iran is not new to promoting the Hijab, which is fine. If a woman chooses to wear it, so be it but someone really needs to fire their (Iran) marketing department.

In this next poster, they claim that the “Veil is security” (from men.) The women are drawn as candy while the men are depicted as flies. Let’s look at it again, yup - Flies. I don’t know about them, but this is quite insulting to men. If they see a woman without a hijab, they will start hovering over them like flies? So what is wrong with the flies, I mean men in Egypt then? Statistically, they harass women in full veils even. 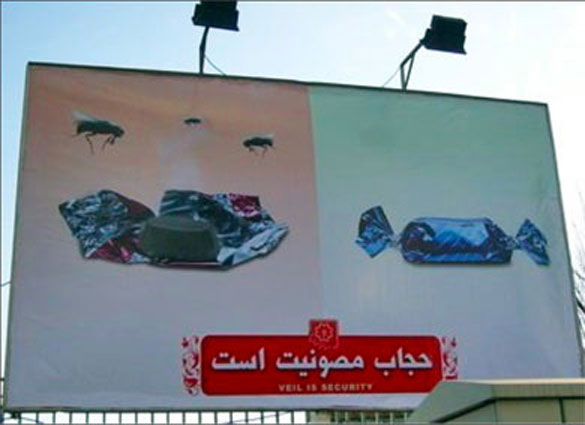 Moving on, this next posters says “We ourselves invite [sexual] harassment: Girls who do not dress properly are harassed and targeted in the streets.” There was a poor 74 year old nun (in her convent, not the streets) who was recently gang raped by 6 men.  I fail to understand, how this one (or any rape) can be blamed on her dressing and location. Clearly, these posters are not based on “scientific” or any in fact kind of research. 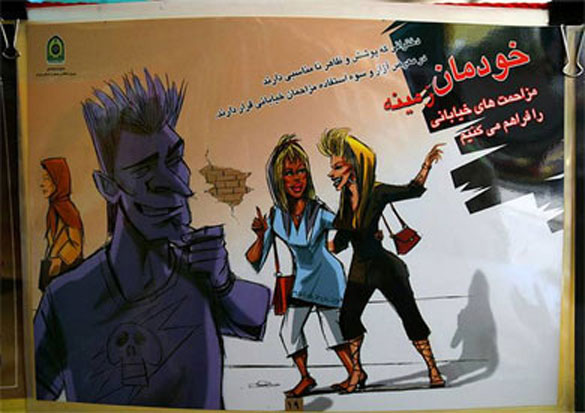 The following poster states “In this blizzard of watchful eyes do not forget your umbrella: Hijab”

Seriously, aren’t there any men out there even mildly offended by being painted as animals in no control whatsoever of themselves? Any? Iran seems to think that men have nothing to do but to be on the lookout for women not wearing a Hijab so they can stare at them. Or based on this poster, throw eye darts at them unless the magic Hijab umbrella or the “Hijumbrella” stops them. 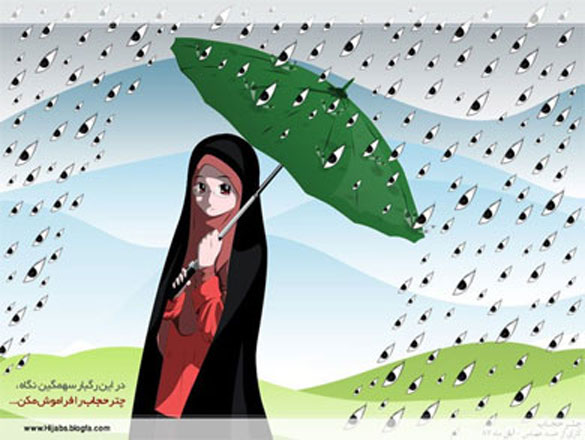 This next one is obviously based on proper tedious time consuming research where all these educated brainy people got together and spent years correlating all the data they had found before coming to the following conclusion stated on the poster -  “Psychologists say: those who dress inappropriately and use lots of makeup have character issues.”

Hmm, I don’t even, I don’t, Ok maybe not. So which psychologists are these? Are these people psychologists exactly the same way Zakir Naik is a doctor? I do wonder. Anyone notice Kreulla on the left had a nose job? The one with the makeup-less and good character (with naturally red lips) on the right has a face which says “Yes, I AM so judging you, you lipstick wearer!”  I find you gross and racist. No wait, that’s Ben Affleck. 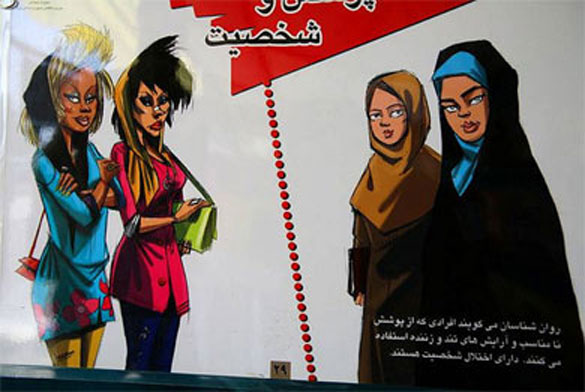 Now in the next one, we really do get philosophical.  “A woman without a Hijab is like a chair with three legs.” That took me a few minutes. From what I know, a stool with three legs is quite sturdy. But hey, what do I know, I am a Hijab-less woman. So this is a chair, which insinuates that without a Hijab, you will be a wobbly woman incapable of sitting straight. Ok then. They even made a Math equation out of it! Bless! Trying to look all educated. 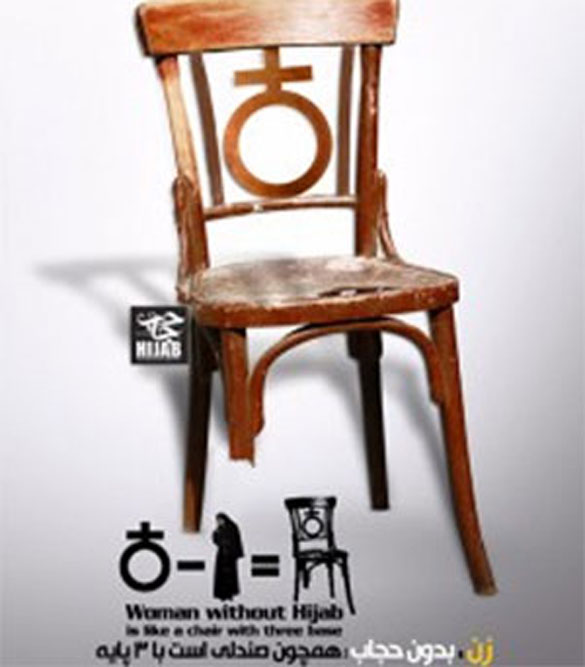 There are numerous other posters and billboards in Iran where women are shown are lollipops and what not in hopes to promote the Hijab but I will end with this last one. Not really about the Hijab but rather something a lot worse than open hair for all to see - feminism! Evil. Pure evil!

The poster shows Feminism as red stilettos. (But the Devil wears Prada!) I am not quite sure what that man is doing there but that shoe is going to get sawed at the sides and all ye feminists will go plopping down to hell.  There, that’s your future you evil Hijab less feminists – Hell!