In a society where women with disabilities are considered a liability, Abia Akram’s success story strives to turn the tables for them. The 30-year-old born with the genetic form of rickets, a rare disease that causes the softening and weakening of bones, became the first Pakistani woman with disabilities to be nominated as coordinator for the Commonwealth Young Disabled People’s Forum earlier this year by using education as a weapon to secure her future. 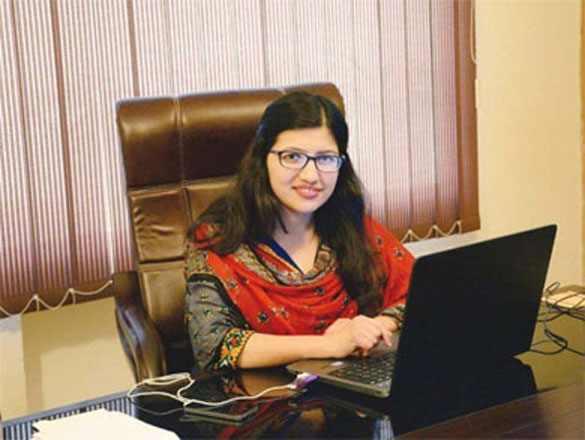 “This is an honour for me,” says Akram. There were two other potential candidates contesting for this position and she won by receiving 50% of the votes. “I cannot forget the moment my name was announced for the position. It was more like [one should sometimes] ‘expect the unexpected’.”

There are several reasons why Akram was perhaps the ideal candidate for the job. After being granted British Council’s Chevening Scholarship, Akram completed her post-graduation in Gender and International Development from the University of Warwick, UK, which helped her envision the leadership role of women with disabilities and learn strategies to implement legislation, particularly the UN Convention on the Rights of Persons with Disabilities. Furthermore, she has been engaged in the activities of the disability rights movement in the country since 1997. She served as a chairperson at the National Forum of Women with Disability and is a pioneering member of the Asia Pacific Network for Independent Living as well as a project manager at the Capital Independent Living Centre. Currently she serves as director projects at the Special Talent Exchange Program, a non-governmental organisation working to empower people with disabilities, as well as sensitising the masses about adopting a rights-based approach.

But things haven’t been smooth sailing for Akram. “People’s attitude towards persons with disabilities is hurtful. Instead of being encouraging, they mostly discourage them,” she says, adding that it was her parents’ support that pushed her forward in the face of adversity. When she was in school, Akram was not aware of her physical disability but people around her made her realise that she was always different. Later, she was forced to use a wheelchair although she wanted to walk without one.

Akram believes that there is a dire need to create awareness among people to change their attitudes. “I know many mothers of girls with disabilities struggling to find a suitable match for their daughters because there are very few people willing to accept them as their life partner,” she says, adding that many people ignore the strength, determination and potential these women possess. “I am confident enough to say that if women with disabilities could be given a chance to prove themselves, they can do much better than many others. If we look back into history, we can find many such examples.”

Sehrish Wasif is an Islamabad-based reporter for The Express Tribune