Afghan Woman, Killed By a Mob for a Crime She Didn’t Commit, Becomes a Rallying Point for Activists

Four days ago, an Afghan woman named Farkhunda lay on the ground beneath the flailing, kicking feet of dozens of men. Her face swollen and bright with blood, she attempted to stand and plead for mercy. But her attackers, who accused her of burning a Koran, kicked her back and exchanged their feet for stones and wooden planks. Before it was over, Farkhunda’s body would be thrown from a rooftop, run over by a car and then set ablaze on a bank of the muddy Kabul River. 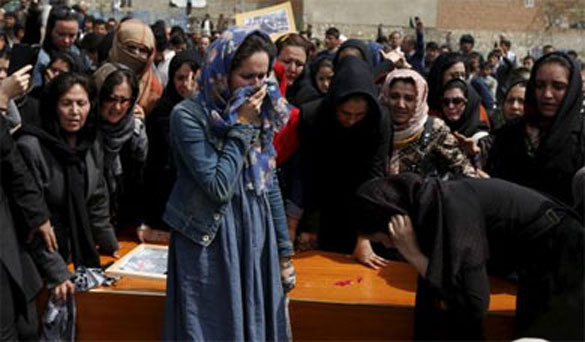 On Sunday, Farkhunda’s body lay in a coffin carried on the shoulders of several black-clad Afghan women. Bucking tradition, these pallbearers took on a role usually designated to men, conveying Farkhunda’s coffin to an open-air prayer ground and then to her grave.

“Farkhunda is a daughter of Afghanistan. Today it is her, tomorrow it could be us,” they chanted, according to freelance journalist Courtney Body, who attended the funeral.

Captured in graphic detail on the cell phones of onlookers, videos of the killing circulated widely online, eliciting horror from some and approval from others. It has also become a rallying point for women’s rights activists, who said that Farkhunda’s beating is emblematic of women’s treatment in Afghan culture. They sent the hashtag #JusticeForFarkhunda trending on Twitter and called on Afghan officials to investigate the murder.

“We want justice for Farkhunda; we want justice for Afghan women. All these injustices happening to Afghan women are unacceptable,” a prominent activist who goes by the name “Dr. Alima” told the Associated Press on Sunday. “In which religion or faith is it acceptable to burn a person to death? Today is a day of national mourning and we will not keep quiet.”

Farkhunda, who like many Afghans has just one name, was a 27-year-old who wore a religious veil and held a degree in religious studies, according to the AP. The details of her killing seem to get murkier with each day since her death, as people offer competing narratives about the mob’s motivations. Everyone seems to agree that on Thursday, she got into an argument with a man who sold amulets in front of the Shah-Do Shamshera shrine. She regarded amulet-sellers as parasites, friends and family members told the AP, and dissuaded others from buying them.

From there, narratives diverge. One of the shrine attendants,  Zain-ul-Din, claimed Farkhunda tossed pages of the Koran into a fire pit intended for disposal of trash, according to the New York Times. He fished a few burned pages from the pit and laid them on a plank of wood, which he carried outside.

Farkhunda argued that she didn’t burn anything — and authorities later said they were unable to find “a single iota of evidence” that she had set fire to the Koran — but the mob ignored her. As the beating became more brutal, police officers reportedly tried to intervene, firing warning shots and attempting to pull Farkhunda away from the crowd and onto a rooftop.

But police were also criticized for not doing enough to control the mob. No sooner than she had been pulled to safety than Farkhunda was thrown back into the hands of her attackers.

Responding to allegations that officials stood by during the attack, Afghan President Ashraf Ghani told reporters that the incident revealed how security forces are too preoccupied with fighting the Taliban to concentrate on community issues. Ghani, now in the middle of a four-day visit to the United States, recently told NPR that most people in his country want a continued American presence in Afghanistan.

On Sunday, Ghani assigned 11 people, including women’s rights activist and member of the Afghan Parliament Fawzia Koofi, to a commission to investigate the killing.

The rumor that Farkhunda burned the Koran persisted in the days after her attack. In a speech at a Kabul mosque, a local cleric said Friday the government should not arrest those involved, according to Reuters.

“It will mean an uprising,” he said.

And Facebook posts from a man named Sharaf Baghlany bragging about his role in the killing were met with approval from many commenters, according to the Los Angeles Times.

But General Mohammad Zahir, the head of the interior ministry’s criminal investigation directorate, said at the funeral Sunday he had reviewed the evidence and concluded Farkhunda was “totally innocent.”

“Last night I went through all documents and evidence once again, but I couldn’t find any evidence to say Farkhunda burned the Holy Koran,” he told reporters.

Meanwhile, Farkhunda’s family members offered conflicting accounts of her mental state. Her mother told the New York Times she suffered from an unspecified “mental malady,” and a police investigator said she told her doctor she planned to commit suicide a few weeks earlier.

But speaking with the AP, Farkhunda’s brother said this was a defense made up by their father, who hoped it would protect the family while they fled to safety.

“My father was frightened and made the false statement to calm people down,” he told Reuters, adding that his sister was an Islamic studies teacher.

“Here was this woman who was smart, and pious and very dedicated to Islam,” Fereshta Kazemi, an Afghan-American activist and filmmaker, said in a phone interview with The Washington Post. “She was exactly what even conservatives there were pushing for women to be like, and yet here she is dead.”

Kazemi is one of many who learned of the killing via social media. Though based in Los Angeles, she’s working with activists in Afghanistan and elsewhere to compile screenshots from video footage of the attack and from the comments on Baghlany’s post bragging about his role, which she hopes will help police investigators identify Farkhunda’s killers. So far, 13 people have been arrested in connection with the assault, and 13 police officers have been suspended pending investigation.

According to Kazemi, the attack — and the response to it — showed how intolerant of debate Afghan society has become. The amulets that Farkhunda protested are a cultural phenomenon not strictly rooted in Islamic texts, and she appeared to be challenging their religious significance.

“But for women in particular speaking up is not really allowed,” Kazemi said. “Women are the first to bear the brunt of having to be silent.”

“The fear and shock are just so palpable,” said Body, the journalist who attended the funeral. “Despite all the progress that everyone thought they had made on the surface, that something like this right in downtown Kabul shocked everyone beyond belief.”

Body said dozens of women attended the funeral yesterday, slowly carrying the coffin over uneven ground in scorching heat. A chain of men linked arms around them, protecting them from an even larger crowd of onlookers. Some of the women shouted at those watching.

“What they were saying was so honest and so real about how women are treated here,” Body said. “That they were yelling at men in the crowd, that they were carrying the coffin at all, shows that they were pushed so far by this, because what happened was just so extreme.”

Women convened again on Monday at the spot where Farkhunda was killed, carrying images of her bloody face and shouting for justice.

Farkhunda’s killing should be part of a larger conversation about tolerance, rule of law and women’s rights in Afghanistan, Kazemi added. That conversation — like the image of dozens of women breaking taboo to honor Farkhunda at her funeral — will give some solace to those now in mourning.

“It was the men that beat her, but it’s her sisters who buried her,” Kazemi said. “There’s healing and power in that.”

Sarah Kaplan is a reporter for Morning Mix.