Honour Killing, Karo-Kari, Is Unfortunately Practiced Not Only in Sindh But Throughout Pakistan

The Sindh Police recently released a report on the statistics of honour killing in the country, which held up a damning mirror to our state institutions charged with our protection and by extension to our society at large. The report revealed that in Sindh, 769 people, out of which 510 were women, were murdered between 2014 and 2019 on the pretext of honour. Although the practice of Karo-Kari or honour killing spares no gender, women still remained the more vulnerable group, with 108 women being murdered in 2019 alone. It is perhaps more disturbing to consider that these numbers are not accurate, as many cases do not get reported. 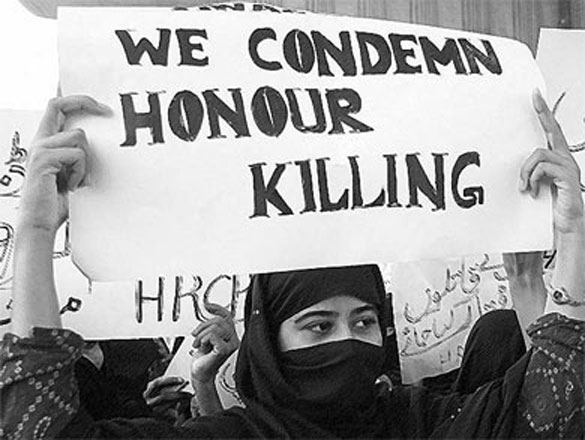 Nearly 1,100 women were killed in honour killings in Pakistan in 2015. PHOTO: REUTERS

Although Karo-Kari is unfortunately practiced throughout the country, Sindh, particularly its upper districts, are a hotbed of murders in the name of honour. A quick gander at local Sindhi newspapers such as the Daily Kawish, revealed that in January 2020 alone, 22 incidents of Karo-Kari cases were reported out of which 19 cases occurred in upper Sindh. A total of 13 women and five men were killed, while three women and three men were injured in the aforementioned incidents. This is further substantiated by the fact that Larkana, the urban centre for upper Sindh recorded the highest number of honour killing cases in the first nine months of 2018.

The data suggests that honour killings are more prevalent in areas where the power is centralised and districts of Sindh are controlled by tribal Sardars. These Sardars are not only heads of their respective tribes, but in some cases, are also political leaders, ministers and the members of national and provincial assemblies. They are well-connected with state institutions and are often protected by them.

The list of allegations that can get you killed for so called honour are as absurd as the thought process behind the crime itself. Refusing to marry according to the wishes of the family, flirting, elopement and a relationship out of wedlock may all get you killed in Sindh. Then there are a list of false allegations that can be levied to avenge personal vendettas or even for financial gain, in the form of compensation. Many in Sindh do not even consider the practice a crime, with an elderly man from Kandhkot telling me,

“Why should we deem it a crime, when it is matter of our Izzat and Ghairat?”

The Karo-Kari practice is so deeply rooted in rural communities that it has its own vocabulary and defined procedural systems. The lexicon of Karo-Kari includes terms like dandchatti (penalty), sangchatti (exchange of women), khair (out of court settlement) and Muqaddam (community mediators). Women, treated like property at best during a Karo-Kari case, have penalties set against their marital status and the nature of the ‘dishonour’ they have brought.

In most cases, a man exclaiming that his wife is Kari with another man is enough to set the barbaric practice in motion, with this mere accusation of an extramarital affair being a death sentence for the woman. In some cases if she is lucky, she is merely kicked out of the house. The man accused to be karo is also usually killed, unless he escapes or is generously spared by the accusing family.

No matter what the outcome, the family of the man accused of karo has to offer monetary compensation, even if the man has already paid with his life. This is where it gets trickier, to understand and not to execute unfortunately,  either of the parties can approach the Muqaddam, who is actually appointed by the tribe leader or sardar to mediate between the families. The Muqaddam will then call in the other party to settle on a date and venue for the khair or the out of court settlement, which is usually the sardar’s house. On the day of the khair, as per custom, the family of the man accused of karo is seated on the floor, while the other party is given chairs, to reiterate the disdain felt for the accused. Ironically the veracity of the accusations is never questioned, just their degrees, and if the karo man has been spared, he is usually happy to pay the settlement amount decided upon during the khair.

The amount is decided upon after deliberating how many times the accused couple met, if there were personal issues between the two parties and if there were any physical alterations between the two parties prior to the settlement. Each of these actions is fined at about Rs 10,000 to 20,000 each and the final amount is tabulated and announced, along with the date of the payment. Some locals say that the penalty amount is distributed amongst the sardar, the Muqaddam, the police, even local journalists and of course the main accuser. The penalty is usually paid in instalments and if an FIR is filed with the police, it is withdrawn.

What perhaps is the most unfortunate is how the existing legislation is enough to eliminate this inhumane practice, despite which the conviction rate stands at a paltry two per cent whereas the acquittal rate is almost 21 per cent. Regardless, it is apparent that a multi-sector approach is required which engages communities and inculcates a change in the perception of honour and dignity among the people. More importantly, we must dismantle the social structures that provide scaffolding to such practices so that we can rid ourselves of this ghastly menace.

Sadiq Bhanbhro is a Senior Research Fellow in Disparities and Global Public Health at Sheffield Hallam University. He is a trained social anthropologist and a public health professional with an interest in gender, sexuality, violence and global public health