In Islam, marriage is a social contract between an adult man and woman which is also legally binding. While it is true that the Quran accords to the husband guardian status of the family as the sustainer and protector of the family, the wife has been granted equal status in terms of treatment and rights. Her marriage cannot be solemnised without her consent because a contract, social or legal cannot be completed without the consent of both the parties. In the same way, in the case of separation as well, the wife has been granted the same equality.

There are two ways of separation or annulment of marriage in Islam. One is Talaq and the other is Khula. While Talaq is administered at the initiation of the husband, Khula is separation at the initiative of the wife. The Verse 229 of Surah Al Baqarah gives a hint at the right of the wife to take Khula. 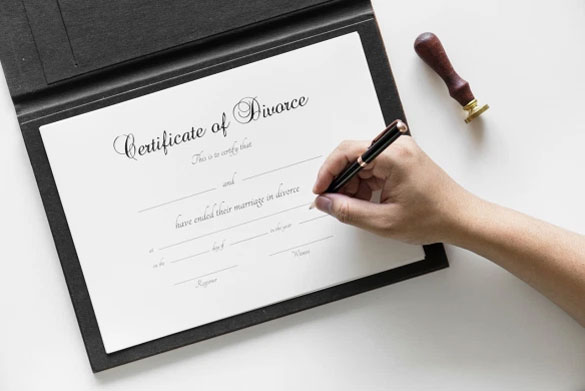 "Divorce is twice. Then either keep in an acceptable manner or release with good treatment. And it is not lawful for you to take anything of what you have given them unless both fear that they will not be able to keep the limits of Allah. But if you fear that they will not keep the limits of Allah, then there is no blame upon either of them concerning that by which she ransoms herself."

Here "ransoms herself" means that the wife can come out of the marriage by paying a price.

There is also a Hadiths which justifies Khula.

Ibn Abbas narrated that the wife of Thabit Ibn Qais (r.a.) came to the Prophet Pbuh and said, "Regarding Thabit (r.a.) I do not fault his character nor his Deen but I fear being ungrateful in Islam. I want to return his garden to him (in exchange for talaq)

The Prophet asked, "Do you really want to do this?"

The Prophet Pbuh then said to her husband, “She wants to return your garden to you (in exchange for talaq)"

The husband asked, "Do I have the right to accept it?"

The husband said, "Then I accept the garden (in exchange for talaq)”. (Musannaf Abdul Razzaq Vol V p 391)

"If a woman fears Ill treatment from her husband or desertion, it is no sin for them twain if they make terms of peace between themselves. (Al Nisa:128)

The verse also sets the precondition for seeking Khula by the wife. The husband subjects her to mental or physical torture and she fears for life or physical harm and/or does not take care of her. In these circumstances she can initiate proceedings for Khula.

If we look at the succeeding verses, the context will become clearer.

"You will not be able to deal equally between wives however much you wish, but turn not altogether away (from one) leaving her as in suspension. But if they separate, Allah will compensate each out of His abundance."(Al Nisa:129-30)

These verses make it clear that if a husband does not treat his wives equally and shows aversion towards one of them, the wife can seek Khula and in doing so she will not be considered a sinner. And the husband should free her in good manner.

Therefore, the Quran grants the woman the right to seek Khula to come out of a painful marriage and make better decisions for her future.