The fourth Sunday of September is celebrated worldwide as the Daughters' Day ever year. Despite being plagued with many ills, the modern world society can be proud for the fact that it has learnt to love, respect and value the girl child. Infanticide and female feticide have been made illegal worldwide. Governments in India and various countries of the world take special steps to educate them and provide them equal opportunity to grow and prosper and be an equal partner in the development of society. 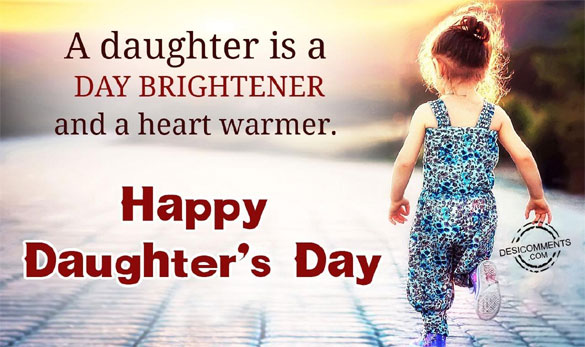 But it is only a recent phenomenon. The girl child had for centuries been considered a burden on the parents and on the society. Having a girl child meant a financial burden on the family as they were not considered productive. They were considered Paraya Dhan (alien property). So it was useless to spend money on their education and upbringing. Moreover, if they remained alive, they would claim share in inheritance. In Arab countries also, having a girl child or daughter was a cause of social disgrace. Therefore, they would bury their innocent daughters alive. The practice of infanticide was not rampant in Arab alone. In Greece, China and Rome too girl children were killed either by drowning or starving or just leaving them abandoned. The reason was inheritance and poverty.

However, the practice of infanticide or burying the girl children was stopped after the advent of Islam in Arab. The Quran strictly prohibited children for fear of poverty or for any other reason in verses Al Ana'am (140), Bani Israel (31) and Al Takweer (8-9).

The Prophet of Islam pbuh presented an example by treating his daughter Fathima (r.a.) with love and affection. He also advised Muslims to treat their daughters and sons equally. Once a man came to the Prophet Pbuh with his minor son and daughter and sat in his company. He put the son on his lap while made his daughter sit on the floor in front of him. The holy Prophet Pbuh asked him to take the daughter also in his lap. The Prophet Pbuh did not approve of discriminatory treatment to daughters.

Islam not only provides for equal treatment of daughters with sons, it also provides for her the right to inhertance so that after marriage she does not consider herself stranger in the family and feel left out. This also gives her social and economic protection. In case of widowhood and divorce, she can find a shelter. The Quran mentions her right to inheritance in the following verse:

"Allah decrees a will for your children, the male gets twice the share of the female if heirs are women, more than two, they receive two thirds of the estate. If only one daughter is left, she gets one half."(Al Nisa: 11)

It cannot be denied that Islam took the first step towards securing the life and human rights of daughters and after that the world gradually realised the need to undo the age old injustices to the girl child and also realised their value in the develolment of the society. It is heartening to see the world celebrating daughters.