What’s that You’re Wearing? A Guide to Muslim Veils 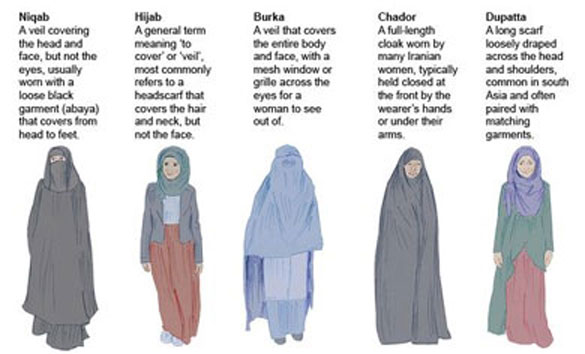 They are banned in France, mandated in Saudi Arabia and a fashion statement in Indonesia. Veils for Muslim women come in all sizes, shapes and colours — and with terminology that can mean different things in different places.

The Quran is oblique in its references to “Hijab,” which is described not as an article of clothing but something akin to a curtain or “separation” that allows for privacy. Here’s a guide to how that looks around the Muslim world.

Abaya: The ubiquitous (and requisite) covering for women in Saudi Arabia is seen throughout the Arabian Peninsula and parts of North Africa. Typically black, the garment is constructed like a loose robe or caftan and covers everything but the face, hands and feet.

Burqa: The Taliban-required garment is worn mainly in Afghanistan, and covers the entire face, with a crocheted mesh grill over the eyes. When first mentioned in The New York Times, in 1988, it was described as “tent-like.” In Kabul, most Burqas are blue, but in other parts of Afghanistan and Pakistan they’re brown, green or white.

Chador: For centuries, women in Iran have worn these semicircles of fabric draped over the head like a shawl. The chador has no fasteners; it is held in place under the neck by hand. Black is the preferred color in public, but women often wear colourful versions at home or at the mosque.

Hijab: The term has become a catchall, particularly in the West, for all Islamic veils, but is mainly used to mean a head scarf. Styles vary not only by geography, but also fashion trends.

Jilbab: Also mentioned in the Quran, the term generally refers to a protective article of clothing, not a specific garment. In Indonesia, jilbab refers to any head-to-toe style of modest dress, especially a head scarf, but in North Africa and the Arabian Peninsula it typically means a long dress or tunic.

Khimar: This is the third term, along with Hijab and Jilbab that is mentioned in the Quran; cumulatively, they make up the religious justification for veiling. Historically, Khimar refers to any article of clothing that promotes modesty, covering the genitals and breasts of a woman and protecting her from the gaze of unrelated men. In some countries, the term is used to describe any veil or head scarf, similar to a Hijab.

Niqab: A veil that covers a woman’s face with a slit left for the eyes. Though not required in Saudi Arabia, it is almost always worn, with an Abaya, by women in public. In much of the world, including South Asia and North Africa, women often don a half-Niqab, a square of fabric tied or held with a band below the eyes.