Iran’s domestic policies affecting childbearing and women’s rights have taken several abrupt twists and turns since the revolution of 1980. Most recently, the government announced that it was striking family planning services from the mix of programs funded by the Ministry of Health and Medical Education, and that it was encouraging universities to restrict women from enrollment in a wide range of professional disciplines.[1] For the regime’s secular critics, particularly those focused on the ongoing decline of women’s rights in the Islamic Republic, these reversals are disconcerting but unsurprising, and could have significance for Supreme Leader Ayatollah Khamenei’s regime.

Unlike prior policies that sought to eradicate vestiges of pre-revolution Iran, both aim to alter social conditions that were encouraged during much of the Islamic Republic’s three decades of existence: a widespread small-family norm, and gender equality in education. In the ideologically charged political ecology of Supreme Leader Ayatollah Khamenei’s Iran, such conditions have been deemed “un-Islamic.”

For the past three decades, the Islamic Republic’s political and bureaucratic elites have steered Iranian society using two not-wholly-consistent “state models”—somewhat like steering a boat using two independent rudders. One model strives for the perpetual Islamic state, an ideal variously interpreted by the clerical faction in command. The other rudder, the developmental state model, focuses on molding Iran into a modern, economically competitive, technologically sophisticated regional power. The social influence exerted by each of these state models has swung back and forth as political power has shifted between conservative, pragmatic and reformist clerics and elected officials, and as the fortunes of bureaucracies and their leaders have waxed and waned.

This “two rudder approach” began with Ayatollah Ruhollah Khomeini during the initial embattled years of the Islamic Republic. Khomeini enforced conservative Islamic dress and behavioral codes for Iranian women, repealed the Family Protection Law, and dismantled secular family courts. He then called upon Iran’s women to produce more children to protect the fledgling theocracy from its enemies, even though in the early-1980s, fertility in Iran (according to UN estimates) averaged over six children per woman.[2] Yet, simultaneously, Khomeini initiated sweeping constitutionally mandated reforms that vastly expanded public healthcare, prompted deep investments in education throughout Iran, and set up a social safety net for the elderly. At the same time, the Supreme Leader reminded parents of their duty to educate their daughters (one of Khomeini’s daughters, Zahra Mostafavi Khomeini, earned a PhD in philosophy and is a professor at Tehran University). By the end of the 1990s, Iran had closed much of the gender gap in primary and secondary education, and women were winning the majority of university admissions. Near the end of his life, the Ayatollah issued afatwa stating that the use of modern contraception was not inconsistent with Islamic law.[3]

To support national educational and maternal-and-child health goals and to ease escalating health and education costs during the initial years of the presidency of Akbar Hashemi Rafsanjani (president from 1989 to 1997), Iran’s Health and Finance Ministries teamed up to design, campaign for, and implement an extraordinarily progressive family planning program. In Iran’s vast rural areas, services were delivered through a state-run network of local “health houses,” staffed principally by female technicians and trained volunteers. In low-income urban neighborhoods, family planning services were delivered through a network of state-subsidized clinics, and private-sector pharmacies and physicians.[4]

Iran’s total fertility rate (TFR, an estimate of the number of children women will bear, on average, during their reproductive lifetime) reached the two-child level around 2000, during Mohammad Khatami’s reformist administration (1996 to 2005), when government support for the state-administered family planning program was perhaps at its peak. The country’s fertility transition spanned rural-to-urban and ethnic-linguistic boundaries, a major accomplishment for a large multi-ethnic population (now at nearly 80 million people) that is still 30 percent rural and spread over a rugged, diverse and expansive physical landscape.[5] Today, the rate of modern contraceptive use among married women in Iran is reported to be among the highest of any Muslim-majority country,[6]and TFR (in 2012) is currently estimated, by several sources, at about 1.9 children per woman (Fig. 1).[7] 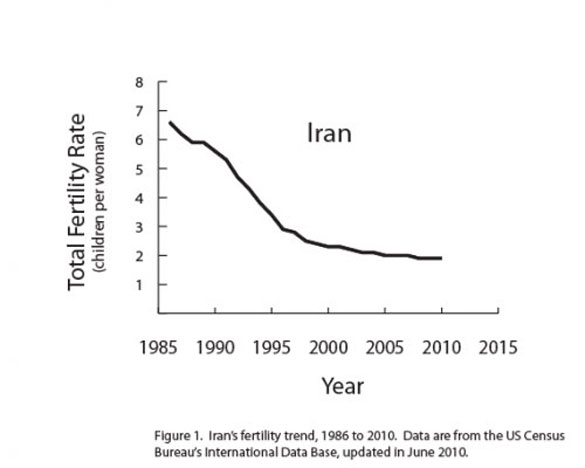 When Mahmoud Ahmadinejad won the presidential election in 2005, he took office at the very beginning of Iran’s “demographic bonus”—a set of age-structural and household conditions that his more progressive predecessors had encouraged. These conditions included a sharp drop-off in the growth of numbers of school-age children, helping families and the state spend more on each child. By the time that Ahmadinejad had assumed office, Iranian parents were educating their children more intensely and more equitably than any pre-revolution generation, while young women were attending secondary schools and colleges in record proportions and entering the workforce in larger numbers. Moreover, much like East Asians during their demographic-bonus years, Iranian households saved, providing an alternative source for domestic investment to oil-export revenues—a factor that no doubt dulled some of the impacts from U.S.-led sanctions.[8]

While President Ahmadinejad has railed against his country’s small families and slowing population growth on several prior occasions, he has never before taken direct action. This time Ahmadinejad has done so, decisively, on two fronts: eliminating the state’s family planning program and narrowing women’s educational opportunities at the highest levels. More could be in store.

But will the absence of state-subsidized contraception and related services cause fertility to rebound to appreciably higher levels? It is hard to tell. The consequences of the government’s educational restrictions are even more uncertain. While university curriculum restrictions and classroom segregation could keep more Iranian women in traditional and non-technical jobs, they could also exacerbate tensions between the educated classes and the regime, and help unite women across classes.

It is, by no means, the first time that Iranian women have endured a series of setbacks at the hands of religious conservatives. Women have often pushed back successfully by organizing and appealing to the developmentalist side of the Islamic Republic—among sympathetic clergy, academicians and within Iran’s well-educated bureaucracy. However, if conservatives continue to consolidate their political power under Supreme Leader Ayatollah Ali Khamenei, Iranians with sympathies favorable to women’s rights may become increasingly difficult to hear or to find. Arguably, these reversals are bellwethers for an ongoing transition to an ideologically purer religious state—and an easing off, and ultimately abandonment, of the pragmatic developmentalist policies (the second “rudder”) that once accelerated the expansion of Iran’s middle class.

Richard Cincotta is Demographer in Residence at The Stimson Center; he is also a consultant on political demography for the Woodrow Wilson Center for International Scholars.