Driss Lachgar seems to have understood the lesson. After stirring up controversy by calling for a debate on women's rights, the first secretary of the Socialist Union of Popular Forces (USFP) will avoid ever setting foot in that minefield again. By advocating gender equality, in inheritance in particular, Lachgar has raised the ire of Salafist sheikhs such as Abu Naim and Zemzemi. The case is now closed. So much for debate! This leaves a bitter taste for those women harmed by the law governing inheritance. 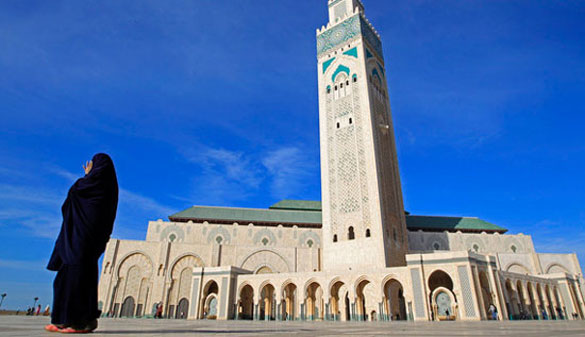 A Moroccan woman walks past the Hassan II mosque in Casablanca, Feb. 24, 2011. (photo by REUTERS/Pascal Rossignol)

“I consider myself to be a victim of dispossession,” complained Wiam, when the question of inheritance was raised. The eldest in a family with two brothers, she received half a share compared with that of each of her brothers, in accordance with Islamic law. “Thank God I work and have an income. Others are less fortunate than I am,” she said.

Such is the case of Aisha. Her deeply religious parents consider women's work as a “sign of the apocalypse.” They had planned to marry her off at the age of 20, but they died a few months after she reached adulthood. Her three brothers have taken the lion's share of the inheritance. “The savings left by my parents were pitiful, but still would have been very useful if they had been distributed fairly,” she said. With no professional training or educational degree, Aisha has long contented herself with minor housework jobs while awaiting a possible marriage, until an aunt took her into her care. “The inheritance law gives more shares to men to provide for the women in the family,” she said angrily.

Cases like those of Wiam and Aisha are commonplace. The guardians of Islamic Sharia have argued that a woman inherits a half-share only in four cases, compared with more than 30 cases in which she inherits a full share. However, it is precisely these four cases that are the most frequent. Islamic law governing inheritance has been drawn taking into consideration the extended family model, which has now disappeared and been replaced with the nuclear family model. Moreover, men before had to meet the needs of the women of their clan, but nowadays they no longer have a monopoly over family finances. According to Hasna Abou Zaid, USFP assistant secretary-general, women attend to the needs of 20% of Moroccan families. This refutes the argument that a brother must inherit twice as much as his sister in order to take care of her. Nevertheless, the Islamic law of inheritance remains fiercely defended by most Islamic religious scholars, who always find the proper argument to justify the status quo. “The word of God prevails at all times, in all places,” they say, implying that God, who has provided modernity, could well have imposed a different law if he wanted to. Some even went further, attacking the dangerous drive toward allowing women to work instead of “liberalizing” them by confining them to their homes.

Kawtar’s parents were more farsighted. “During his lifetime, my father gave me a gift. If he hadn’t, my inheritance would have been distributed with distant family members.” Her parents couldn’t stand seeing their daughter deprived of their hard-earned properties. “A Muslim Moroccan can give all of his estate as a gift, which may seem paradoxical when you think about the thoroughness with which the inheritance of a deceased person is regulated,” explains Fadela Sebti, a lawyer in Casablanca. She added that, in the case of a gift, anyone could be designated as heir, even someone who is not a family member. “The gift is not subject to any condition. This is contrary to French law, which specifies for example that the gift may be revoked for cause of donor ingratitude. [In Morocco,] once the property is donated, the gift becomes irrevocable and the donor can no longer seek restitution.”

The gift remains the preferred means to circumvent the Islamic law of inheritance, but it is not the only one. The bequest also allows the transfer of one-third of one’s estate by way of a will, thus favouring a specific heir. However, unlike gifts, “other heirs must accept the will at the time of its drafting or ratify it thereafter. The will is not a definitive act. It can be modified throughout the life of the donor, and may even be revoked,” said Sebti.

If resorting to a gift is not favoured by some parents who fear tarnishing the ties between their daughters and other family members, the bequest is an amicable solution par excellence. However, disagreements among heirs might arise. “When my mother wanted to bequeath me a part of her property, she was met by the refusal of my brother. He said it was Haram [religiously forbidden] to modify the inheritance law. Ultimately ... she gave me a gift,” said Roqaya. After that, the brother cut ties with his mother and sister and considered them impious.

Although the issue of inheritance is one of the most-discussed subjects in Islam, it remains a taboo. With the exception of Tunisia, few Arab countries have dared to approach this subject without hearing cries of infringing on Sharia law. The general outcry that accompanied Lachgar’s call for discussion reveals the refusal to deal with anything having to do with divine jurisdiction. Those who defend the untouchable character of Sharia join the debate with the intention of excommunication. Islamic inheritance law by no means enjoys a consensus among scholars. Some have questioned it under the pretext that it stems from a patriarchal interpretation, while advocates of Islamic feminism even consider that it misrepresents the real message of Allah. Its victims are unanimous. Just like Roqaya, these victims believe that “the Islamic inheritance law is incompatible with our time and definitely needs to be reviewed.”