Marriage and Divorce in Religions and As Given In Quran 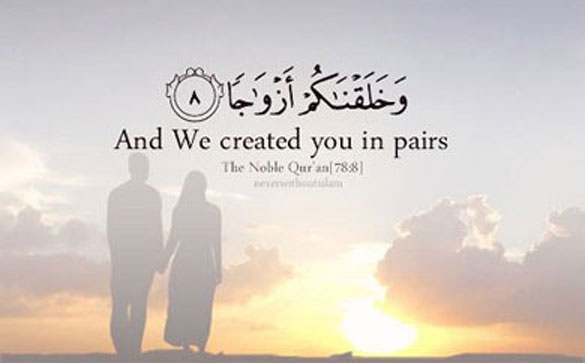 Religious and social customs in almost all societies and in all walks of life were constructed by Males to give them greater advantages over the Females. This is true even today. In many progressive countries there are ministries and commissions to protect women’s rights to counter gender discrimination.

Discrimination against women is alive and well and universal. The UN in its Article1 of Charter to promote says: “…co-operation in promoting and encouraging respect for human rights and for fundamental freedoms for all without distinction of race, sex, language or religion”. For that reason there are established conventions such as The Convention for the Status of Women (CSW) and others such as The Convention on the Elimination of all Forms of Discrimination against Women (CEDAW)! In many parts of the world, backed by legislation, the attitudes are changing for the better.

The well-meaning, learned and enlightened scholars never tire of telling the world that Quran, whence Islam originates, was the first ‘ordinance’ to grant unprecedented rights to women and empower them, centuries ago. For that reason the poet philosopher Dr. Iqbal is quoted as saying that it appears to him that the Quran is written by a woman for women.

It may be so, but in practice the religiously implemented rules and regulations named “Sharia” – to falsely give it Arabic/Quranic tinge -- in many countries and societies of Muslims not only contradict but reject Quran’s ordinances. They utterly humiliate the female in their customs of marriage, divorce and reunion! This is focused on here, in only one aspect.

This issue is discussed on some of the very important principles of Quran, viz:-

1.     Mankind, including womankind is created on the basis of “dignity”.

2.     Accepting the naturally occurring weaknesses of females, man and woman have “equal rights”.

4.     In the normality of social structure, Man is the “provider” of the weaker sex.

5.     Human relations are based on “Justice”. Where Justice is composed of a package of: a) Equality, b) Equity, c) Compassion and d) Generosity.

6.     Mankind is endowed with intelligence to conduct itself “rightly”.

These principles are paramount and are to be applied always.

Marriage in Quran is serious event based on: promise, understanding and commitment by two consenting and fully mature adults to comply within the agreed terms of the union. This commitment or ‘contract’ must be witnessed by at least two respectable members of the community, one each representing the bride and the groom. This is to ensure that the community at large is assured that the union is: moral, ethical and in terms of the laws of the land, legal. There are literally hundreds of verses in Quran referring to marriage conditions; prohibited marriages, age of maturity, consent, waiting period, exchange of gift, divorce, reunion and other related issues.

Just one feature of the religious/Sharia practice is focused on here; that of couple seeking reunion in marriage after their ‘final divorce’ has taken place. This final divorce is the one that is enforced by Quran following reconciliation of the couple to come together in marriage twice previously, having gone through two divorces.

Divorce, though allowed in Quran is but reluctantly; it is not to be trivialized. Two chances are therefore given to come together in the event of breakup. The reconciliation is to be attempted by two people, agreed by the couple. In some progressive countries this function of reconciliation is performed under State legislation.

There is an additional important condition that of “waiting period” for the female; that is primarily to determine the matter of any issue that may eventuate that is, “The child of the marriage bed”. If the reconciliation is unsuccessful, the third divorce is taken as the final.

Reunion for the couple after this breakup, in consideration of many issues, for example the children, family and the community relationship etc. is possible; but is made very difficult. So, one more chance is given to the couple to reunite, if both are so desperate to.

But religion has wangled a way out of the difficulties; in the process putting the female in the most degrading and humiliating position, not discussed in details here, but briefly!

The common practice among some Muslims, if the female and her former husband want to reunite after the third divorce then she is to ‘marry’ a complete stranger for the specific purpose of getting a divorce from him. After consummating the marriage and then divorced, she can reunite with her former husband. No difficulties are encountered there!

As pointed above, the seriousness of marriage union and divorce has been established as a solemn, honourable and legal protocol in Quran.  But this is trivialized to the extent that it defies all human civilized standards of decencies in the treatment of the female in common practice!

As with any other contract written or otherwise, the dissolution of it is to take place exactly in the manner as it was made in the first place with formality and legality involved; so too it is with the dissolution of marriage contract.

The principle set out therein is THREE divorces to make the final break of the first marriage. The absolute last chance for reunion now can only be taken after the woman gets married to a new suitor of her choice. Then if this new marriage too fails, after having gone through all the processes as before and the final divorce and after the required waiting period, she can remarry her first husband if they both so desire! How unlikely would that be?!

Therefore the proponents of common religious/Sharia practice have just a few pertinent questions to answer:-

1.     Has the new husband got to be a certified eunuch, to prevent an “issue” from this marriage?

4.     Who takes the responsibility for the child?

But there is more…The former husband who takes her back – by now perhaps she is the mother of few of his children -- after the humiliation the poor woman is put through…he must either be an Angel or an ignorant stupid man. Whatever the case, is it not a wonder then as to why they both went through all these traumas if they were so desperate to remarry?!

As stated above it is ‘highly unlikely’ to ever succeed in practice because in the first place the new marriage too has to be on Quranic principles:-

·       It has to be committed and contracted to on the moral, honourable and ethical basis.

·       There must be an attempt made for reconciliation.

·       The three divorces and the waiting period requirement must be followed to make it final. There is NO exception given in Quran to its rules.

It is highly likely, considering the long time that must elapse in this rigmarole and the aging of the couple the new marriage may turn out to be a permanent one and therefore a blessing to all concerned. Then all is well that ends well.

But in the worst case, the new marriage eventuating in the final divorce, in spite the attempted reconciliation and waiting period as required, the remarriage with the first husband - with pomp and glory, witnessed by hundreds of invitees as usual - becomes valid, honourable, moral and ethical and with the required “dignity” maintained all round. Hopefully the remarried couple would be old enough by now and matured to have learnt their lesson.

That is Islamic since it gives even more dignity 49-13 to mankind including womankind by their noble acts. But religious people do not study the scripture but practice the hearsay religions instead to degrade half of humanity.

With three divorces the Home Mistress is made homeless!

2-44, Do you enjoin right conduct on others and forget to practice it yourselves, and yet you say you study scriptures? Will you not use your intelligence?