Elham Manea, The Female Imam: Change The Story To End The Killings Of Arab Women And The Patriarchal Arabic-Islamic Life

Two weeks ago, following the murder of an Arab Israeli woman named Wafaa Abahreh from Arabeh, a feminist friend posted on Facebook: “Changing the story, preventing the next murder.” That phrase, “changing the story,” stuck in my head, as did the way Wafaa died so brutally, allegedly murdered by her ex-husband who, as of writing, still walks among us. 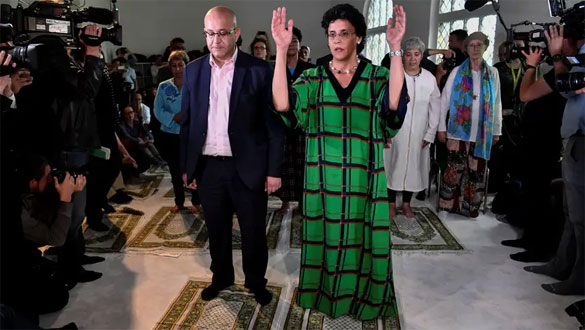 Swiss-Yemeni academic, journalist and activist Elham Manea, right, rehearses a prayer for the visual media before leading an inaugural Friday payer at the Ibn Rushd-Goethe-mosque in Berlin, in 2017.Credit: JOHN MACDOUGALL / AFP

We would like to change the story. We would like to change the ending, to create a story that doesn’t end with the blood of Palestinian women, or any women. But our steps and moves have not been achieving those ends. We demonstrate, we protest, write, promote legislation, and Palestinian and other women are still being murdered. Sorry, friends, the story is not changing, and apparently these tools aren’t going to change it.

The question of how to change the story and its ending has been haunting me, and compelled me to look for examples of social and feminist actions that do change or at least tried to change the story in the Arab world and how it ends. But I decided that this time I would write about innovative, radical, uncompromising tools, the kind that clash with reality come what may. I searched for tools that had turned the patriarchal Arabic-Islamic life into a nightmare.

I found the tool and the face and the story. I found Elham Manea.

Dr. Manea, 53, a political science lecturer at the University of Zurich and originally a Yemenite human rights activist, confronted one of the archetypical Islamic taboos head on. In 2017, she declared herself an imam (the leader of worship at a mosque), and even prayed publicly with Muslim men and women and delivered a sermon at a Swiss mosque. As if that wasn’t bad enough for the conservative Muslim world, the service included musical interludes played within the mosque.

I was stunned to subsequently discover that things like this have been happening in the Arab Muslim world since 2005. They never reached the Islamic religious discussion in Israel in any way. Moreover, it made me realize just how captive the Islamic discourse is to the male agendas, to which there is no alternative.

Manea’s act not only went in the face of an Islamic legal prohibition – Islam bans Muslim women from leading Islamic religious rituals, let alone with men and women participating together; she also violated a social prohibition by presenting an alternative vision, with the revolutionary introduction of new ideas regarding women’s roles within current Islamic religious practice. Manea did not just gather the crumbs that the dominant religious discourse offered her. She did not go along (at least not fully) with the religious gender division of roles in which women are led like sheep to pasture. She negated the physical and symbolic exclusion of women within Islamic religious practice, and the submissive female identity within it.

Many in the Arab world were outraged because her actions indicate that she and other Muslim women have something to say about how Islam is observed, in terms of content and practice: Manea speaks about an Islam that is broad and accepting and embracing, in which there is room for a wide range of Muslim religiosity.

To me, the religious discourse and practice as well as the feminist struggle from within it, are unacceptable. The same goes for Islamic feminism, which operates within the religious boundaries, excusing, interpreting, justifying and collaborating with the violent Islamic discourse.

But while I don’t agree with it, I can understand, the need, for lack of choice, of some Muslim women to act and fight from within. I am cognizant of the price that Muslim women can pay when they clash head on with the religion, its boundaries and its religious legal dictates. I also understand that Muslim women have the right to try, time and again, to find their place within the boundaries of the religious discourse and practice. It is their right to conduct a dialogue and to push for change from within the religion that provides them with a physical and symbolic space too. Muslim women everywhere have the right to challenge this religious supremacy with whatever tools they choose, even if I think it’s a lost cause.

It’s a lost cause because religiosity is the patriarchy’s most available and strongest tool, and our use of it as women is to our disadvantage. It is a tool that will lead us to them, because it is their arena, and then we’ll again find ourselves trapped within a discourse that replicates the power structures and the gender division.

But beyond all of this, the fundamental problem I have with change from within the religious-Islamic discourse is that our rights as women are not supposed to be subject to interpretation or negotiation by various religious sages. Our rights are supposed to be anchored in a democratic and egalitarian constitution and not subject to challenge.

Still, the interesting thing about the outlook and actions of Manea and others like her is that they are demanding ownership of the religiosity they’ve been denied not through empty slogans, but through well-constructed alternatives that are immediately implemented without waiting for legitimization or any social, religious approval. Manea is unilaterally changing the story de facto without relying on religious interpretation or similar precedents. She is basically saying: I am the precedent, and it is taking place within the religious game though not completely surrendering to it.

In order to change the story, the narrative, the language and, most importantly, the outcome of this narrative, our demand as Palestinian women whose sisters are murdered morning, noon and night, is to remove the issue of dealing with violence against (all) women from the hands of the police. We’ve done enough knocking on the doors of the welfare system, the courts and the police. The time has come to discard the tools we’ve used up to now and to adopt a radical discourse and tools that will bring down the patriarchy and its various arms.

But how? You must be wondering. I have an answer to that too. A forum should immediately be established of female lawyers and activists and others who will take on the investigations, lawsuits, monitoring and handling of the problem of violence against women. Women changing the story means taking the police out of the picture. Changing the story means creating feminist entities, mechanisms, tools and processes that will put an end to this bloodshed.

Original Headline: This Female Imam May Have the Solution to the Killings of Arab Women