Why the World Loves Malala Yousafzai

Hurrah for Malala Yousafzai. Her tireless work for girls’ rights to an education all over the world has just been awarded with the highest accolade imaginable: The Nobel Peace Prize.

It’s an incredible feat for anyone, let alone a 17-year-old schoolgirl. But it can’t be denied that Malala deserves this award. She’s been campaigning for girls’ rights even since she was 11 years old, when she lived in Pakistan’s Swat Valley and blogged about the importance of young girls going to school.

Her efforts resulted in her being shot in the head by Taliban militants when she was just 15, in 2012. But Malala survived the shocking assassination attempt, and has gone on to become an international role model. She’s admired by everyone – from international leaders to Justin Bieber and a group of Tottenham teens who once told me: “Malala’s well sick, innit?”

She is – not ill that is, but pretty damn amazing. It’s why she has even been recognised by the United Nations who designated July 12, her birthday, as ‘Malala Day’ – a day of global campaigning for a child’s right to receive an education.

Last year, she missed out on the Nobel Peace Prize.

Her fans were naturally disappointed, but judging by comments on Twitter and social media, that’s the last thing on their minds now; they’re just thrilled that her work has been recognised this year, by winning the prize jointly with Kailash Satyarthi, a Hindu activist.

But even though Malala didn’t win the award back in 2013, she was still a heroine. Today, on the eve of the United Nation’s International Day of the Girl, she’s more powerful than ever. 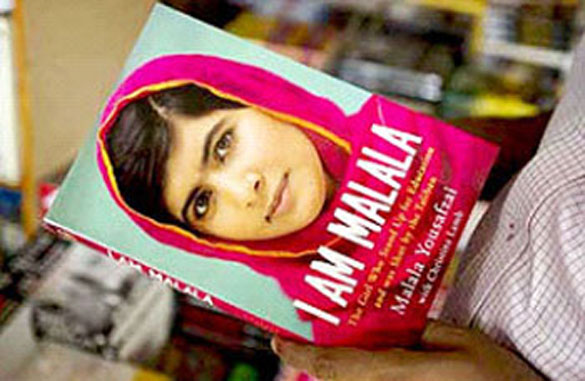 So here are some of our top Malala moments, and the quotes that show just inspirational she really is:

1) “I Believe That A Gun Has No Power At All Because It Can Only Kill, But A Pen Can Give Life. A Pen Can Save Lives.”

Malala made a powerful speech at Glamour magazine’s ‘Women of the Year’ awards in 2013, even upstaging fellow honouree Lady Gaga who was on that month’s cover. She – as well as the cheering audience – was so struck by Malala that she said: “If I could forfeit my Glamour cover I would give it to Malala.”

2) “Instead Of Standing In Front Of Parliament Why Don’t You Go Inside And Bring The Changes You Want?”

At the launch of Malala’s memoir, I Am Malala, at the Southbank Centre last year, she told the audience why she wanted to be a politician. “For helping the children of Pakistan to go to school, for helping every child out in the world, for those 57 million who don’t go to school, I want to join politics,” she said.

When she was asked what political party she would join in Pakistan, she replied with the sort of answer that makes us all love her: “I’ll find the one that really wants to help. If I don’t find a party, then I’ll make my own.”

One of Malala’s top strengths is the way she connects with teens here in the UK. She spoke earlier this year on International Women’s Day about social media, in a way that hugely resonated with the teens listening. She said:

“I don’t use Facebook or Twitter or Instagram, it needs time, but it’s my message to every teenager that this is a great way for you to raise the issues that children are facing, of child trafficking, or FGM. Don’t use it just to post pictures and then comment on it and get likes or followers.

“[Teenagers should] use these resources in a good way as a source of highlighting the problems that women are facing.”

4) "We Cannot All Succeed When Half Of Us Are Held Back."

Malala gave her first speech at the United Nations on her 16th birthday last year. In it, she spoke about the importance of women's rights, and said:

"There was a time when women social activists asked men to stand up for their rights, but this time we will do it by ourselves. I am not telling men to step away from speaking for women's rights rather I am focusing on women to be independent to fight for themselves."

In it, she writes: "I told myself, Malala, you have already faced death. This is your second life. Don't be afraid — if you are afraid, you can't move forward.” Her words ring true for all of us.