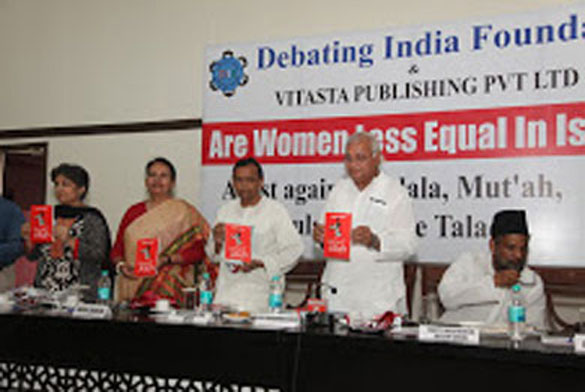 It was music to ears of most in the audience when celebrated reformer, former Union Minister Arif Mohammad Khan, lambasted most members of the All India Muslim Personal Law Board (AIMPLB) for knowing nothing about either "Islam or Law" and Mutfi Maqsood Ul Hasan Qasmi, Head of the Imam Council of India, giving a call for reforms in Muslim personal law. "Let us have a national debate on what personal laws of communities should be" the Mufti said while addressing a huge gathering that had come to discuss the plight of Muslim women in Islam. 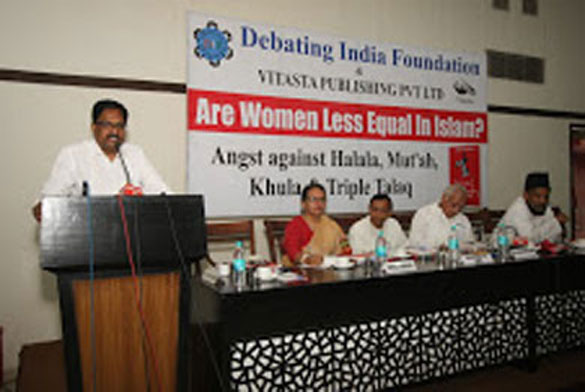 Speakers at the meeting including Annie Raja, Noor Zaheer, Mahendrapal Arya, moderator and president of Debating India, Sudesh Kumar Verma, and many others from the audience stressed the need for uniform civil code. Former Union Minister gave a very liberal interpretation of Islam and criticized the interpreters of the religion for making it appear to be anti-women.

Something must be done to change this impression and leaders of the community had onerous task in hand. There is nothing called triple Talaq in either "The Holy Quran" or the Hadis, he said and wondered how this had come to be accepted as Islamic practices. "Not even 10 per cent of the people running the AIMPLB know what the law is. They neither know about Islam", he said.

Arif Mohammad Khan had shot into limelight when he resigned the Cabinet of Rajiv Gandhi in 1986 over the Congress Party government's decision to overrule a Supreme Court order that granted maintenance to a destitute Muslim woman, Shah Bano. Ever since, Khan has become the face for reforms in Muslim Personal Law.

The discussion was organised by Debating India Foundation in the context of controversial author Noor Zaheer's latest book Denied by Allah: Angst Against the archaic laws of Halala, Triple Talaq, Muta'h Marriage and Khula". The book has been published by Vitasta Publishing Pvt. Ltd.

The Islamic issues on inequality of women, which is often discussed in hush-hush tone and brushed under the carpet was discussed in full public view. If there is something wrong anywhere in the country, everyone has the right to discuss, comment and work for improvement irrespective of the community he or she belonged to. This weakened the argument of those who stay outside on the pretext that reforms should come from within the community.

Author Noor Zaheer highlighted the issue of Halala marriage where a woman has to marry another man, get divorced and then get back to her original husband if the husband realizes the mistake and wants her back. The issue is why should a women be subjected to the ignominy of sleeping with another man for the fault of her husband, Noor has questioned. She said that Islamic practice of Muta'h marriage had degenerated into prostitution, where by the terms of marriage and automatic divorce are stipulated in advance. Most cases of Arabs coming to India and marrying younger Muslim girls till their stay here have resorted to this practice, she has argued. There are examples where a girl has been married seven times to different people under Muta'h. Mufti Maqsood Hasan said that the practice was a Shia tradition and not of the Sunnis.

About Khula marriage where a Muslim woman has the right to get divorce, it would not come unless the husband pronounces triple Talaq, thereby showing the bias against women. Moderator Sudesh Verma sought to know if Islam championed equality between both the sexes, why is the right of Triple Talaq not given to women. He also raised the issue of Sharia law saying those who champion Sharia law should be asked why they do not demand the same in criminal matters.

Islamic cleric Mehboob Ali who converted from being an Imam of Bada Masjid of Baraut, a village in Baghpat district of Uttar Pradesh, to Vedic faith when he was 30, questioned various provision of The Holy Quran that relegated women to a second place. He quoted extensively to prove his point. His attempt to present the Vedic faith in glorious light was shouted down by members of the audience who demanded that he should focus on the issue of Women and Islam rather than glorify one religion over the other.

The debate took place in a highly surcharged atmosphere where the audience was not ready to listen to justification of archaic practices. However, everyone appreciated when the Mufti termed the practice of Halala as wrong and called for reforms. There appeared a near consensus that the time had come to talk about uniform civil code for the country and those who wanted to behave as citizen of the country. Good practices from all religions should be included to make this code, most speakers said or consented.

Annie Raja justified living relationship to the clapping of the younger audience who opposed the Mufti for speaking against this modern practice. Individuals should have the freedom irrespective of their faiths, Annie Raja stressed.

Noor Zaheer's book that was formally released at the function discusses medieval laws irrelevant in the 21st century, sexist biases that pass for conventions, life impacting decisions made only by men which have denied women basic respect and protection, dignity and humaneness, often in the name of religion. The book asks, what has the community gained by keeping half of its population backward, ill-educated, chained to archaic laws, unwell and deprived? And how long will the laws for Muslim women in democratic India remain the same as in any Shariah-governed country?

Mufti Maqsood Hasan refused to be a part of the release since he disagreed with the title of the book.

Khan joined the Janata Dal and was re-elected to the Lok Sabha in 1989. During the Janta Dal rule Khan served union Minister of Civil aviation and Energy. He left the Janata Dal to join the Bahujan Samaj Party and again entered the Lok Sabha in 1998. Khan held ministerial responsibilities from 1984 to 1990. In 2004, he joined the Bharatiya Janata Party (BJP). Khan quit the BJP in 2007.

Khan has been deeply involved in writing since his student days. He is the author of the bestselling book of the year 2010 Text and Context: Quran and Contemporary Challenges, published by Rupa & Co. [1] Now Arif Mohammad Khan actively involved in writing the articles and columns related to Islam and Sufism.

Mahendra Pal Arya aka Mahboob Ali was the Imam of Badi Masjid, Baraut, Bagpat. Having brought up in a religious family, he knew Quran by heart. Since childhood, he was known as an exceptional student. Being a Wahhabi (one of the 73 or more sects of Islam that claims to be the only one on path of truth, rest being hell-seekers), Quran alone was his passion, zeal and vision.

He knew that the only message of peace is that of Quran. Only Quran could provide solutions to problems of humanity. He was convinced that all that is good in other religions is borrowed from Islam. Islam meant peace, brotherhood, love and compassion.

Inspired by the vision of the Messenger of Peace, he started a campaign to spread awareness about Islam and its message of peace. Since Quran taught him to love all humans, he would enter into peaceful dialogues with scholars of other faiths to nurture a common platform of brotherhood.

As part of his campaign to have dialogues with other faiths, he once entered Gurukul Indraprastha. This being an Arya Samaji Gurukul, the caretakers had no qualms in inviting a Muslim to stay at their Gurukul for as long as he liked. He was surprised to hear such clear pronunciation of Quranic verse from a non-Muslim spiritual teacher. He then recited another verse from Quran on brotherhood.

Exposed to this aspect of Quran for the first time, he never took them so seriously and considered them to be directions in specific contexts.

The Gurukul caretakers procured for him a copy of Urdu translation of a book named Satyarth Prakash in Hindi, which translated into "Light of Truth” in English. This book was written by Swami Dayanand Saraswati in 1883.

Imam Mahboob Ali stayed in gurkul for next few days, all alone and completed the book from cover to cover. Within a few hours the world, life, its purpose, its meaning – everything was different for him. He had now witnessed a perspective that he had never imagined before. He tried his best to find credible loopholes in the content of the book, but could not. The Imam had to spend next several days in isolation to digest all this and stabilize.

Today, after 30 years of that episode, Pandit Mahendra Pal Arya has now only one mission in life – to spread the message of Vedas. He has brought innumerable people in the Vedic fold, has defeated many a scholars of Islam and Hindusm in countless debates, and continues to spread the Light of Truth despite threats.

Being a Bengali Muslim, he knew nothing of Hindi or Sanskrit. However, he first mastered these languages, and then studied the original Satyarth Prakash (Light of Truth), the Vedas and all other Vedic texts. He lives in his small home on the outskirts of Delhi and has issued an open declaration to embrace Islam; if one can answer the very questions that made him leave Islam.

He is President, Imam Council of India. The All India Imams Council is the common platform of the Religious Scholars, Prayer Leaders and Religious Teachers in Islam.

The All India Imams Council is an organisation for the social cause of developing and empowering the Indian society, particularly the Muslim community.  It attempts to unite Ulema from all schools of thoughts and jurisprudences and intends to  put their joint efforts for a better future of the  community and  country. While respecting all the different thoughts and opinions within the limit of Islam, All India Imams Council takes a neutral and impartial position in matters in which Ulema are permitted to take different positions. This organization does not prohibit its members from working in other Ulema or other organizations that are within the framework of Muslim Community.

She is the General Secretary of National Federation of Indian Women, CPI member and wife D Raja CPI.

Recipient of Senior Fellowship from the Department of Culture for 'Surviving on the Edge', an analysis of the performing arts of the tribes of the north-western border of India, and the Times Fellowship for 'The Changing Face of Theatre in Northern India', Noor is at present working on the Buddhist Monasteries of Himachal Pradesh, documenting the oral traditions and the performing arts of the Lama tradition.

She is the author of bestseller My God is a Women and Denied by Allah.

Sudesh Verma wears many hats. He is a media person and a columnist writing about various issues of the country. Prior to becoming a freelancer, he was News Editor of NewsX TV channel. He is an activist and a lawyer practicing in various courts of Delhi including the Supreme Court.  He isalso the president of the think tank called Debating India Foundation that hosts today's show along with Vitasta Publishing. This organisation is not affiliated to any ideology other than the ideology of nationalism and change. Sudesh is also known as author of the best-selling book on Narendra Modi called "Narendra Modi: The GameChanger".  He is a liberal to the core and wants all issues  to be debated threadbare without any bias.

Is a new think tank that seeks to promote debate on all issues facing the country. It does not subscribe to any ideology other than nationalism and India first. Cogito Ergo Sum: I think therefore I exist and it seeks to stimulate thinking. It is liberal and all inclusive.