Nusrat Jahan, a Champion of Liberalism in a Changing India 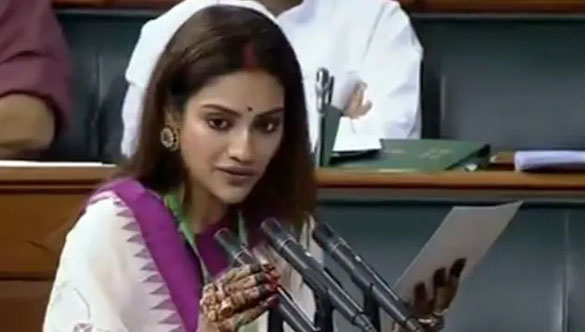 Nusrat Jahan, the newly elected Trinamool Congress MP from Basirhat in West Bengal, appears to be emerging as the new symbol of liberal India. At a time when the word secularism has acquired interpretations that are erroneous and misleading, given the right wing’s propensity of twisting old cherished political values, the 29-year-old actress-politician is seen as a champion of liberalism in a changing India. By attending Parliament wearing a Manglasutra and donning Sindoor, Nusrat rubbed the Islamic clerics the wrong way, and was therefore told to renounce her religion because such practices went against the tenets of Islam.

On Thursday, she followed this up by participating in ISKCON’s Rath Yatra at Kolkata, much to the chagrin and displeasure of her detractors declaring that though she was a believer in Islam, she respected all other religions as well. The ISKCON function was also attended by West Bengal Chief Minister, Mamata Banerjee, who is sought to be projected by the BJP, as anti-Hindu and pro-Muslim. However, in the light of Nusrat’s wedding to Nikhil Jain, a businessman, and her overtly broad-based approach to different faiths, she is being viewed as Mamata Banerjee’s lucky mascot to woo back Hindu votes.

Nusrat has also portrayed herself as a person who celebrates tradition by seeking the blessings of her elders, regardless of their political affiliations, by bowing down to touch their feet in reverence. The Bharatiya Janata Party has been taken aback, and thus has not been able to react to the rapidity of the developments. Many of its leaders have endorsed Nusrat for standing up to radicals, and do acknowledge that the young cine-star has shown the way forward.

It is not uncommon for the world of cinema to lay down norms when communal tensions are at their peak. The film industry perhaps is the most secular and unambiguously accommodating. Dilip Kumar rose to become the country’s foremost actor, though it was a known fact that his real name was Yusuf Khan. In Baiju Bawra, a film that set the tone for musical innovations, the immortalised Bhajan, “Man Tarpat Hari Darshan Ko Aaj’’ was composed by Naushad, penned by Shakeel Badayuni and rendered by Mohammad Rafi. Sixty years on, it is still considered as an iconic Bhajan. Sahir Ludhianvi, Kaifi Azmi, Majrooh Sultanpuri, Hasrat Jaipuri, Jan Nisar Akhtar were amongst the most popular poets who also wrote lyrics for films. Meena Kumari, who died very young leaving her inerasable imprint on Hindi Cinema with her distinctively unique talent was born Mahajabeen. Film enthusiasts fondly recall that virtually all the top heroines who touched a chord in every heart had a huge fan following on account of their artistic prowess and it had nothing to do with their religious leanings. Madhubala went down in the annals of cinema perhaps as the most beautiful actress, and Nargis became a household name, first as the heroine of several Raj Kapoor films, but finally after her unforgettable portrayal of “Mother India” in Mehboob Khan’s magna opus.

Ironically, this evolution of cinema unfolded soon after the tragic partition of India, when the country was ruthlessly divided by the British, on the basis of religion. Pakistan became an Islamic Nation, while India retained its secular character, largely because of tall leaders such as Maulana Azad and Rafi Ahmed Kidwai who considered this dissection as an unnatural severance. Actor Shah Rukh Khan’s family, which hailed from Peshawar and was inspired by Mahatma Gandhi and Khan Abdul Ghaffar Khan shifted to Delhi; they were amongst the very few Muslims to migrate to India.

Mohammad Rafi and Talat Mehmood emerged as the voices of new India and along with Lata Mangeshkar, Geeta Dutt, Suraiya, Asha Bhonsle, Mukesh, Manna Dey and Kishore Kumar, dominated the playback singing era. Just as Akhtar-ul-Iman’s dialogues in Waqt are occasionally still recalled, Salim Javed changed the manner in which screenplays were written.

Many of our front-ranking leaders were nurtured so that tolerance was in their blood stream. There existed the Ganga Jamuna “Tehzeeb” where communities participated in each other’s festivals; Holi, Deepawali and Eid were celebrated by one and all. Indian cuisine with its varied aromas and flavours is a part of our collective palate—whether it is the Punjabi North Western Frontier food, or Mughlai or Awadhi and Hyderabadi. The appeal of the Dosas and the Idlis is universal, and it is not without a reason that they are distinguished as healthy and nourishing fare.

Former President, Dr Abdul Kalam was revered by most Indians for his simple living and high thinking. He has left an indelible mark on our history. He could never have been charged for being communal or sectarian. Muslims in India have been an integral part of this country. They do not constitute a different ethnic group as is so in most of the Western countries. They comprehend that India is secular because it is a Hindu dominated country.

Therefore, one can only recollect Sahir’s immortal words, “Tu Hindu Banega, Na Muslmaan Banega, Insaan Ki Aulad Hai, Insaan Banega”. (It is inconsequential if one is a Hindu or a Muslim as long as one turns out to be good human being.) Fundamentalists must realise that living harmoniously and respecting all faiths has been the essence of our ancient culture. By her recent actions, Nusrat Jahan has demonstrated that it was not by preaching, but by practising, that this unequivocal truth, which is backed by the Constitution, has been brought home. Between us.