The Abayas and the veil didn’t help. The Kingdom of Saudi Arabia has dropped the patriarchal theory of holding a woman fully responsible when she gets harassed. In the workplace and in the markets, there have been many utterances and actions that are incongruent with the image that the Saudis painted of themselves in their own minds: that they are an ideal society protected by years of forced separation of the sexes.

But all that didn’t work. Thousands of verbal and physical harassment cases are recorded with the police. Instances of harassment get documented on social media, thus angering the kingdom’s virtual community. 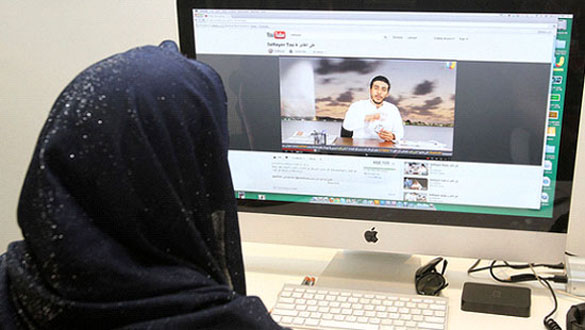 A video shot at a building’s entrance in Dammam shows a young man harassing a young girl waiting for the elevator. He lifts her school dress and touches her private parts, then enters the elevator with her. The disturbing video ends at this point, but without putting an end to the incident.

The girl didn’t scream or resist. It was a brutal, smooth and scary scene. The video went viral, Saudi Twitter users applied their usual pressure and the criminal was caught. He could be punished by several lashings and a short prison stay. The absence of a law that deters the crime has worsened the harassment phenomenon targeting women and girls.

Harassment in Saudi Arabia has become a serious phenomenon. The tip of the iceberg has now been revealed because of a general desire by the victims to reveal the criminals. Posting photos and videos documenting certain events has shed light on sensitive topics that the kingdom wishes to avoid dealing with.

According to statistics, a quarter of children in the kingdom are subjected to a form of harassment by adults. The children are between the ages of six and 10 and have lived the horror of harassment by people who enjoyed the parents’ confidence, whether relatives or workers who are close to the children, such as servants or drivers.

For a long time, these issues were not dealt with properly and left unmentioned. Parents preferred to keep quiet and avoid scandal, which is what people here fear the most. Lack of home and school awareness for children has turned them into frozen statues whenever someone touches or even rapes them.

The Virtual World Is Ahead

In Saudi Arabia’s virtual world, which is way ahead of its reality, a Facebook page titled "Childhood without harassment" was created to shed light on the issue of child molestation. The page was created after an incident in which minors were raped in the city of Jeddah and in response to the light punishment given to the criminals. The punishments were limited to several lashes and short prison stays against perpetrators who caused great psychological and physical devastation to the victims.

The collective harassment incident that took place in a shopping mall in the eastern region was the cornerstone for a law intended to fight the growing phenomenon. In the incident, a group of Saudi women were collectively harassed by a group of young men. One of the women shot the scene and put it up on social media to expose the perpetrators.

Before the video’s publication, there had been efforts to put in place penalties to reduce harassment. The Shura Council is studying an integrated penalties schedule for verbal and physical harassment. The bill, which aims to combat harassment and stop its growth, sets penalties that depend on the offense, starting with a warning and censure, followed by fines that reach up to half a million riyals (more than $120,000), flogging and imprisonment for up to five years.

Women Working As A Cause?

In the debate on harassment, some blame the labour law that permitted female presence in shops and markets. They fully blame the women for seducing young people and pushing them to commit these bad deeds. But those who make such claims are silent when it comes to child molestation. They merely call on the parents to practice the culture of prevention and shielding: banning young girls from playing in parks, on the swings or riding bicycles, for fear of drawing male attention. They say that the solution lies in hiding the sex that is causing the trouble for the kingdom, i.e., those who wish to protect themselves and live their lives naturally like any other person on the planet.

In a study of 24 mostly Western countries, Saudi Arabia was ranked third in the rate of harassment. The super-conservative religious state stands in front of a new challenge imposed by the world of virtual communication, which shakes society every time there’s a video or a picture showing that the kingdom is not as perfectly fine as it thinks.