Taliban And Girls' Education: Girls Are Being Deprived Of Their Educational Rights Granted By Islamic Shariah

Girls' Schools Have Been Closed After A Short Duration

1.    Taliban are in a dilemma over the girls' education.

2.    They had earlier said that they would allow girls to go to schools under Islamic limits. 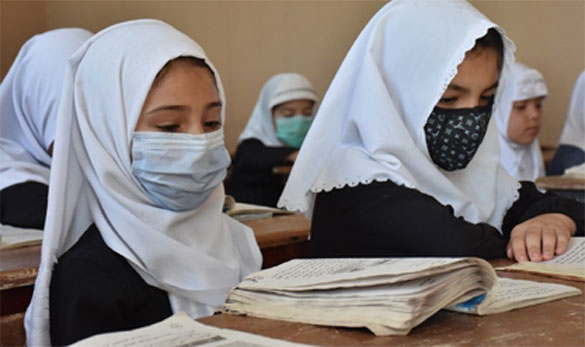 When Taliban had come to power again in August 2021, they had tried to show that their approach towards women and girls' education has changed. The Taliban leadership had said that they will give women and girls their due place in society and that they would allow girls to go to schools and colleges. They had even opened the schools for a short duration and then closed them again. They have said that they will allow girls to go to schools under Sharia guidance but it seems that their Ulema have not reached a consensus on what the system of girls' education should be in an Islamic structure.

Islam's stand on education is clear. Every Muslim man and woman must receive education. And one should go as far as China to acquire knowledge and education. Islam has also made its stand on purdah (veil) clear. All the Islamic countries allow girls to receive knowledge through traditional systems of education. The limit of purdah is also been determined for them but in no Islamic country, girls ' education becomes an issue of policy for the government or the Muslim society.

Earlier the Taliban ordained that there would be curtains between the girls and the boys in the classroom and the girls were told to observe purdah. Pictures of such class rooms went viral on the social media.

The Taliban want the girl students to be escorted to and fro homes and sit in separated or all female class rooms. They also want only female teachers to teach girls. Then perhaps the issue of syllabus is one major issue as they would not like the "un-Islamic" subjects to be taught to the students, both male and female.

It is known to all that conservative mainstream Islamic ulema have held the position that science is not included in Islamic education. This was the ideology behind the preparation of the syllabus of the Darul Uloom Deoband in the 19th century. This belief has not changed after two centuries and even today madrasas do not include science in its syllabus. Since the Taliban follow the Deoband school of thought, they will most probably turn all the schools into religious institutions where only Islamic sciences will be taught.

The Taliban are faced with this dilemma because they have never been a social Islamic organisation. They have presented themselves as a militant organisation and they know how to fight. To govern a country is a diametrically different issue. A political party has its views and policies on every sphere of governance, that is, on economy, on gender justice, on education, on human rights etc. The Taliban don't have their policy framework because their leadership consists of radical Islamists, not of scientists, economists, educationists and liberal modern Islamic thinkers.

They want girls to be taught by women teachers but in a society where women education is restricted, women teachers can not emerge. And educated women will not accept the strict rules about purdah they want to impose. Already many professionals have migrated from Afghanistan.

The Taliban say that the closing down of schools for girls was only a technical issue. The decision on their uniform has to be taken. It is just ridiculous. Islam has outlined women's dress and so there should not be so much delay on the issue that schools need to be closed. Obviously, there may be other reasons.

The actual reason is that Taliban cannot work or operate in isolation. It has to conform to international standards. Last year, during the Oslo conference, the western nations had linked financial assistance with freedom of women and girls' education, human rights and freedom of expression. This is the dilemma with the Taliban.

In the bigger world the Taliban will have to make some compromises in the field of education. media, human rights and freedom of expressions. In a caliphate, an ordinary Muslim has the right to hold the caliph accountable. (The example of Hadhrat Umar is before us). Without accountability, they can not run their government. In the modern global milieu, they will not only be accountable to their own people but will also be accountable to the world community.

The problem with the Taliban is that one military leadership is deciding all the issues There are no different committees to look into different affairs. The top militant leadership thinks that they have all the knowledge of all the fields. They have completed 7 months in power and don’t have a decision on the girls ' uniform. Does the prime minister of a country decide what the uniform of the students would be? And are the schools kept close till the time the decision is made?

During the last 7 months they have not been able to bring stability and normalcy in the country. Millions of children are on the brink of starvation and the US refuses to release billions of rupees of Afghanistan frozen in the US banks. Instead of making compromises with the US and other western nations, Taliban have taken a confrontationist stance against them. They have imposed restrictions on the Voice of America, BBC and Deutsche Welle. Thanks to the restrictions, these media outlets have been barred from working.

According to recent reports, the Taliban have issued advisory for government employees. According to the advisory, every employee must conform to the dress code imposed, keep beard, wear a cap or turban and wear loose shirt and Shalwar above the ankle. This makes it clear that the Taliban are heading towards imposing the Wahhabi lifestyle.

Therefore, it can be guessed what their policy towards women, media and education is going to be.