Muslims Should Establish More Schools And Colleges For Girls.

2.    They were barred from entering exam hall in hijab

3.    Majority of the girls prefer exams to hijab 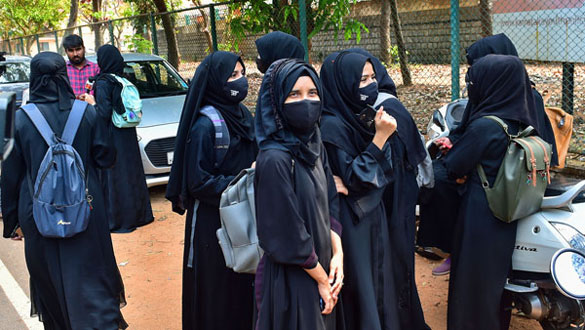 The hijab row in Karnataka took its toll on the educational career of forty Muslim girls who preferred hijab to education. They skipped their exam when they were not allowed to enter the exam hall with hijab.

These girls had big dreams and wanted to become doctors, engineers, professors, lawyers, judges or fashion designers but now their future hangs in uncertainty. The teachings that had been imparted about veil had made their attitude rigid.

The trend of purdah or hijab among young Muslim girls is not very old. Even two decades ago, Muslim girls used to go to schools, colleges and universities without hijab. What they cared for was a decent dress. The parents did not have any problem. Religious leadership never encouraged girls' education and so madrasas were only meant for boys. Girls were taught at home.

In every town of India, schools for boys or for both boys and girls were established not by ulema but by social workers and educationists who knew the importance of education. Sir Syed Ahmad Khan is one example. The ulema only opened madrasas for boys. Though they formally used to say that education was necessary for men and women, they never meant it. They had the view that women should only manage their homes. They should not work in offices in close proximity with men and their earnings should not be accepted by their family.The fatwa of Darul Deoband is well known in this regard.

So the girls who today want to get higher education are not inspired by ulema because ulema never encouraged them to go to schools or colleges. But ironically, the girls who go to colleges against the wish of the ulema are unduly inspired by the ulema on their views on hijab or veil. After passing the exams and graduating from colleges, these girls will go for higher studies and find jobs as professors in schools, colleges and universities where they will work in 'close proximity' with male professors or teachers. If they become doctors, they will have to work in 'close proximity' with male doctors and deal with male patients of all hues. If they become engineers, they will face the same dilemma. And when at the end of the month, they will bring home the salary, their family will not accept it because it will be haram for them.

Presently, not only in India but also in most of the Islamic world, women work with men in every sphere of life. No one cares for the fatwa of Deoband. When the Islamia Inter College of Deoband allowed the girls in 1995, the ulema made a hue and cry but the parents sent their daughters to the college. Parents did not give any importance to the objections raised by ulema.

Two decades ago, this would not have been an issue for girl students. This dilemma with the girls of Karnataka is faced because of the rigid interpretation of religion gaining more ground there. Ironically, in Afghanistan, the women are forced purdah and in India, girls are forcing hijab on themselves.

This is only the result of increasing identity-oriented religiosity in India among the Muslims. Some radical and conservative Ulema advocate full veiling of face except a hole before the right eye though the Quran and hadith do not prescribe this kind of veil. In a multicultural society where Muslim women want equal visibility with the women of other religious communities, they cannot afford to be so rigid as to keep themselves invisible in society. In the process of keeping them invisible, they have made them hypervisible which has created problems for them.

Obviously, for some girls, their future and their career was more important than than the hijab. Some colleges are girls' college where girls could have no problem attending the exam without hijab.

Before the girls who skipped their exam due to ban on hijab, some Muslim women resigned their job because they would not forgo hijab. These girls will face similar problem in future, if not now if they have a rigid notion of hijab in a multicultural society.

The hijab controversy should now stir the collective conscience of the Muslim society. A constructive approach finds opportunity in every crisis. And there is opportunity for Muslims in the hijab crisis. The Muslims should chalk out a long term policy of establishing schools, colleges and vocational training centres for girls where Muslim girls can study while not being forced to remove hijab. If a community is so obsessed with its religious identity and about its women, it should not leave them at the mercy of others or should not ask for privileges.