Restrictions on Women Was Lifted At Workplace

3. Recruitment for women in Defence was opened in 2021

5. Mixing of sexes allowed in movie theatres and sports complexes. 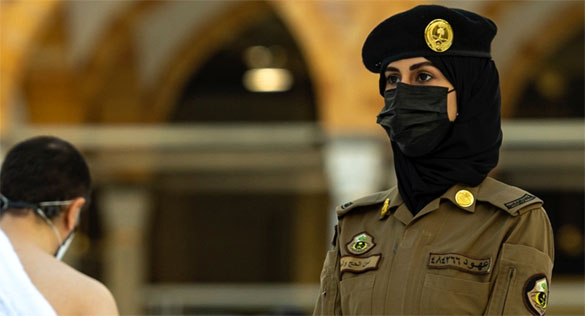 As part of Saudi Arabia's Vision 2030 initiative aimed at bringing about political and social and economic change in the Kingdom, women security personnel were deployed in Makka and inside Bait al Haram this year to oversee security arrangements and to look after the safety of worshippers and ensure the compliance of precautionary measures.

Saudi Kingdom's defacto ruler Prince Mohammad bin Salman's Vision 2030 initiative is behind a number of reforms brought in laws relating to women specially Guardianship Laws. Under this initiative restrictions on women in workplace were lifted.

Though this was the first time women were deployed to oversee safety and security of pilgrims, the process of inducting women in security sector had already started in 2017. During the Hajj season that year, the first all-female -call-centre was opened in Makka where women executives received distress calls from pilgrims related to fire, crime, accident and illness. This was initiated also because women sometimes want to speak to a woman for the sensitivity of their problems.

However, the all-female call centre was housed in different department segregated from men’s call centre.

This year, the women in Saudi Arabia were deployed in security sector during the Hajj after the Defence Ministry opened recruitment for women in Land forces, Air Defence, Navy and Defence Medical Services.

But this opening up of the workforce arena for women in Saudi Arabia has not come about easily. For the last decade, many women's rights activists had been fighting for easing and lifting of restrictions on Saudi women. They have been demanding removal of conservative Guardianship Laws, lifting on restrictions on driving by women and other gender based restrictions.

Finally as part of reforms under Vision 2030, the Saudi government lifted the ban on women's driving in 2017 and removed some major restrictions in Guardianship system according to which a women remained a minor through her entire life and was not allowed freedom of choice and taking her own decision regarding her marriage, education, travel or ownership.

Of late, women have been allowed to drive a car or travel without the consent of a male guardian, female activists are of the view that the reforms are symbolical and do not change the life of women much. However, the easing of restrictions on women has started to take place. Mixing of sexes has been allowed in movie theatres and sports complexes though this move hss been criticised by clergy as un-Islamic. Ironically, the activists who had fought for these changes have been behind bars on charges of sedition and terrorism and on charges of working for foreign agenda. One of the most active and vocal fighters of women's rights in Saudi Arabia Loujaine Al Hathloul had to remain behind bars for more than five years and was tortured. Another dozens of women's rights activists are also still behind bars.

At the moment, the women in Saudi Arabia are fighting for their legitimate rights enshrined under Islam and the deployment of women in Makka as security personnel during the Hajj this year is only a small step towards women empowerment in Saudi Arabia. The country has a long way to go in this direction.