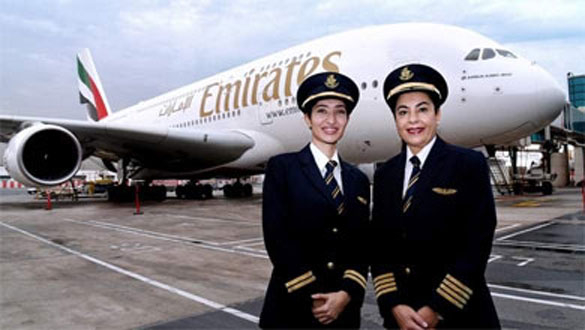 •  Malala Hopes Entire Next PSL Is Held In Pakistan

•  International Women Day to Be Observed On March 8

Women makeup close to 44 per cent of Emirates' workforce

On board to fly from Dubai to Veinna were Captain Nevin Darwish from Egypt and First Officer Alia Al Muhairi from the UAE. While Darwish is the first woman of Arab origin to have captained the Airbus A380, Muhairi is currently the youngest Emirati female pilot operating the aircraft.

Women have been making their mark in the aviation space with many embarking on the journey to be pilots. They makeup close to 44 per cent of the airline's workforce and have been an integral part of the success story of Emirates over the last 31 years. The airline currently employs more than 29,000 women from over 150 nationalities. Over 18,000 work as cabin crew, while the rest are represented across technical as well as in professional and leadership roles. Close to 2.5 per cent of the total female staff occupy managerial positions in the airline.

Early this week, Air India aimed for a world record with an all-female crew on Boeing 777-200LR.

Malala hopes entire next PSL is held in Pakistan

Lahore: Nobel laureate Malala Yousufzai has said she hopes the entire next edition of the Pakistan Super League (PSL) is held in Pakistan. “Today is a huge day for Pakistan cricket and I would like to thank Najam Sethi, and congratulate him for making our dream become reality,” said Malala in a video message on Sunday. “I hope the next PSL can take place completely in Pakistan,” she was quoted as saying in a report carried by The Express Tribune website. The education activist thanked foreign players who are in Lahore for the PSL final for supporting Pakistan cricket.–Nation Monitoring

She also wished good luck to Peshawar Zalmi. “Good wishes for Peshawar Zalmi as I’m a big fan and support this team but whoever wins, it’s Pakistan’s win,” she concluded.

International Women Day to be observed on March 8

Islamabad-International Women’s Day will be observed on March 8 to celebrate the social, economic, cultural and political achievements of women. The day also marks a call to action for accelerating gender parity. This year the theme decided for the day is `Be Bold for Change’.

To mark the day, National and International organizations also scheduled a number of events here. A mega event is being organised by National Press Club in collaboration with British High Commission and United Nations Information Centre. On March 6, training for women journalists is being organised at the auditorium of International Labour Organisation (ILO) on legal and harassment issues faced by the women journalists and digital security while a conference would be held on March 7 at the same venue to highlight women achievements besides challenges faced by them while discharging their professional duties, Vice President, National Press Club told APP. White Ribbon Campaign would hold a workshop on pro-women laws and Legal Awareness on March 7.

Whereas, Ending Violence against Women and Girls (EVAWG) alliance has decided to continue its position on Anti Rape and Anti Honor Killing Acts and Electoral Reforms as they need to be amended. The alliance would also hold a press conference based on Commission on Status of Women (CSW) position 61th session in connection with the IWD celebrations while a walk with torches would also be planned on March 8. The Human Rights Commission of Pakistan (HRCP) and

International Commission of Jurists (ICJ) is organising a conference on International Women’s Day with friends from across the country to celebrate the contribution and struggle of women human rights defenders (HRDs) in Pakistan on March 8.

GAZA: Hamas authorities in the Gaza Strip have canceled plans to give students a day off on Wednesday for international women’s day.

The internationally backed Palestinian Authority in the West Bank has declared women’s day a public holiday.

But Hamas, which has controlled Gaza for the past decade, said Sunday it would not obey the order. It says Wednesday will be a normal work day and schools will be open, though the first hour of classes will include discussions about women’s role in the Palestinian national struggle.

Hamas gave no reason for its decision.

We list the reasons why Dubai is the preferred city by women.

"I feel safe in Dubai. I don't have the same feeling of security in my own country, which is very sad," says Ornella Parigi, an Italian expat in UAE since 1994. This is the common sentiment many expats we spoke to share about the city.

In today's uncertain times, 'safety' is beyond doubt the most voiced concern among expats. Away from their homeland, they find safe haven in Dubai. Ask any expat and the negligible crime in Dubai tops their list of reason to stay in the city.

As the International Women's Day is just two days away, we list a few reasons why women feel safe in Dubai. Read on -

1. Freedom to venture out

Fancy a midnight walk at Dubai Marina or grabbing a late night ice cream? It might come as a surprise to outsiders but a woman can enjoy a carefree stroll at midnight without being concerned about her safety. Be it leaving for an early morning shift at 5 am or coming home at 1 am from work, you can easily hop on public transports or cabs and walk to the safety of your home.

If you sense discomfort, just dial 999 and the Dubai Police will be at your rescue.

Dubai is home to expats who come in search of better opportunities and send every penny saved back home. As such, the public transports - Dubai metros and Dubai buses are the most preferred modes of transport. It is not surprising that 9,880,952 residents use the metro every month, adding up to 118,571,429 riders every year.

To ensure comfort for female travellers, Dubai Metro has reserved compartments for ladies. There are reserved seating and marked areas for ladies in Dubai bus too. So, in spite of the rush hour,  ladies can travel stress-free.  Men travelling in the ladies compartment can be fined Dh100 if caught.

Much to the chagrin of few men, ladies usually get preference or dedicated separate lines at medical centres, ATM counters, hospitals, offices and most other counters. If there is no dedicated queue, the men (fellow expats and locals) would let you jump the line. Chivalry does exist in this part of the world.

Thousands of female expats comfortably relocate and work in the city without any worries. The females we spoke to expressed how they had the freedom to wear whatever they desire without being judged or stared at by onlookers, a luxury they didn't enjoy back home. This also busts the misconception that many have about Dubai's restrictive dress code.

Being single in the city comes with its advantages. Unlike some other cities where getting a rented apartment for a single lady may seem like a herculean task, Dubai is a smooth sail. You will get an apartment if you have a residency visa, irrespective of your relationship status. And your neighbours and watchmen will be more than happy to lend you a helping hand.