Triple Talaq Should Not Be Applicable To Hindu Women Married To Muslim Men: PIL 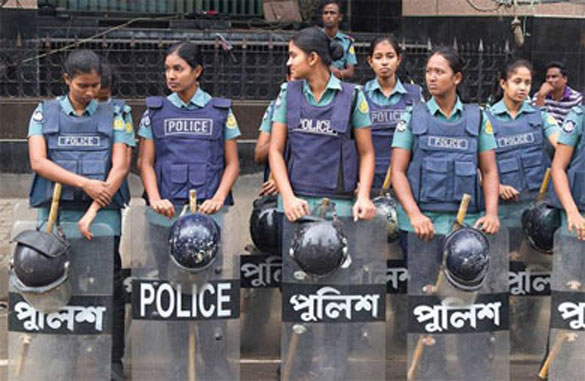 •  Muslim Woman Accuses Hubby Of Divorcing Her Over WhatsApp Message

•  Bangladesh Policewomen Honoured For Their Contribution

Triple Talaq Should Not Be Applicable To Hindu Women Married To Muslim Men: PIL

A plea was on Friday moved in the Delhi High Court seeking direction to the Centre that triple ‘Talaq’ or polygamy should not be applicable to Hindu women who are married to Muslim men.

The petition which is likely to come up for hearing before a bench headed by Acting Chief Justice Gita Mittal demands to shed limelight on the plight of Hindu girls affected by triple Talaq.

The PIL said that since the ‘nikahnaama’ (marriage contract) is written in Urdu, Hindu women fail to understand provisions related to triple ‘Talaq’ or polygamy.

The Muslim cleric should explain the provisions of the ‘nikahnaama’ pertaining to summary divorce and polygamy to the Hindu women in their mother tongue, the petitioner urged the court.

The petition said that triple ‘Talaq’ or polygamy should not be applicable to Hindu women who are married to Muslim men.

The petitioner said that since there is no provision of registration of marriage in Muslim law, therefore, time has now come for a direction to the Union of India to make registration of Inter-caste marriages compulsory either in Special Marriage Act or in Compulsory Registration of Marriages Act.

The PIL said the issue is serious and of public importance as the plight of many Hindu girls married to Muslim boys is involved, due to the danger of triple Talaq by their Muslim husbands or of another marriage by the men.

Muslim woman accuses hubby of divorcing her over WhatsApp message

A woman MBA graduate has accused her husband of divorcing her by sending a message through messaging app WhatsApp in Hyderabad.

The woman, a resident of Tolichowki area, said she married Mudasir Ahmed Khan, who works in Saudi Arabia, in February last year.

She told reporters that her husband was with her for 20 days and left for (Saudi) in March 2016.

“He (Khan) was initially good with me and everything was fine and we were regularly in touch,” the woman said yesterday.

“When I went to my in-laws house in September, my father-in-law locked my room and asked me to go away saying my husband has divorced me. My in-laws did not specify any reasons and just asked me to leave the house and they evicted me from the house,” she alleged.

She demanded that the government should bring out a law that such people are not given bail.

The message purportedly sent in the name of Khan in September, which the woman showed to media, said, “I Mudasir Ahmed Khan gave you triple Talaq and removed you from the wedlock. You will soon receive the official divorce declaration paper from my end and please do not bother to come to Saudi.”

The woman said she had approached the police also.

When contacted, the police said they are verifying the matter.

Last month, a 38-year-old man was arrested here for cheating his wife by giving her ‘Talaq’ through a post card within eight days of marriage.

Another man, hailing from here and based in the US, allegedly gave ‘Talaq’ to his wife through WhatsApp. The case came to light in February when she approached the police alleging that her in-laws tried to murder her.

In another incident, a case of cheating and harassment was registered early this month against a non-resident Indian who allegedly divorced his wife through a newspaper advertisement.

A Muslim women's body has said that the All India Muslim Personal Law Board (AIMPLB) should not act like a kangaroo court and has no right to impose its decisions on issues like 'triple Talaq'.

The comments by All India Muslim Women Personal Law Board (AIMWPLB) President Shaista Ambar came as the Yogi Adityanath led Uttar Pradesh government initiated the process of eliciting the views of Muslim women on the 'triple Talaq' mode of divorce. "The AIMPLB should not act like khap panchayat (kangaroo court). They have no right to force their decisions or recommendations on anyone. It is the decision of the court and Parliament, which is finally accepted," Ambar said today.

Moreover, in the name of defending the law, three months counselling period mentioned in the Sharia (Islamic law) cannot be overlooked, she added.

Amber, had yesterday attended a meeting called by Uttar Pradesh Women and Family Welfare minister Rita Bahuguna Joshi to elicit the views of Muslim women on the issue of triple Talaq. The state government intends to place these views before the Supreme Court.

"The Constitution has given the right to equality to all...triple Talaq is most unfortunate for Muslim women and the UP government, on the basis of their (Muslim women) opinion, will place its view before the Supreme Court," Baghuguna said.

Bahuguna said that equality in education, security as well as social equality are not just the but also a necessity for every woman.She said there are several Muslim countries where triple Talaq has been done away with adding that the Supreme Court was deliberating on the issue and the UP government will place its views before the apex court based on the opinion of Muslim women.

Those who participated in the meeting called by Bahuguna are learnt to have opined that the option of social boycott of those indulging in triple Talaq in an arbitrary manner, as recommended by the AIMPLB, will not help in discouraging the practice.

The AIMPLB had earlier adopted a resolution saying that those who give Talaq without Sharia reasons will face social boycott. It had asserted that Muslims have a "constitutional" right to follow their personal law including the triple Talaq mode of divorce.

In a statement issued on Thursday, she says this is discrimination and would send a negative message to tourists as well.

She states such a violation of women’s rights is against the laws of the country and the women of Gilgit-Baltistan should not be treated any different to the women living in Pakistan.

Ms Jahangir says the people of Gilgit-Baltistan desire to gain freedom for themselves but without extending these freedoms to their women in letter and spirit, their society would not progress. The germs of intolerance were unknown to GB in the past, she adds.

Bangladesh Policewomen Honoured For Their Contribution

The award giving ceremony was held at Police Staff College Convention Hall on Thursday. The awardees received the awards in seven categories

The award giving ceremony was held at the convention hall of Police Staff College in Dhaka on Thursday. The awardees received the awards in seven categories.

Jakarta. Fatayat NU, the women's branch of Indonesia's largest Muslim organization, Nahdlatul Ulama, has called on the nation's women to unite against radicalism.

"The spread of radical and terrorist ideologies among women should receive more attention. It means that if we want Indonesia to be safe, women should also move, unite and work hard to fight these negative ideologies," Anggia said in Jakarta on Tuesday (18/04).

She listed several ways women can oppose radicalism and terrorism, including by teaching their children that Islam is a friendly religion and a blessing to others, while also instilling a greater sense of nationalism.

Anggia added that children will be immune to radical ideologies if they receive proper religious guidance from an early age.

"Therefore, Fatayat NU is developing family-based sermons. We also continue to empower our women preachers with knowledge of the threats posed by radicalism," she said.

"Coinciding with Kartini Day on April 21, Fatayat NU will inaugurate 1,000 antiradicalism preachers in Bandung [West Java]," she said, adding that the aim is to assist the government in preventing the spread of radicalism in Indonesia.

Anggia said several women have been implicated in acts of terror in recent times. One example is Dian Yulia Novi, who was arrested in an anti-terrorism raid in December for her alleged involvement in a plot to bomb the Presidential Palace in Central Jakarta.

"Therefore, Indonesian women should not stay silent. There are many things they can do to take active roles in preventing terrorism, such as educating the public about the threat of terrorism," she said.

Anggia said with thousands of grassroots members across Indonesia, Fatayat NU can make a positive contribution by detecting radicalism in the community.

"With the antiradicalism preachers, we will be able to easily prevent [the spread of radicalism]," she said.

She also urged Indonesian women to gain greater knowledge of technological advancements, because the internet is currently the main tool for spreading radical ideologies.

"Mothers should know social media, at least to observe their children with their gadgets," Anggi said.