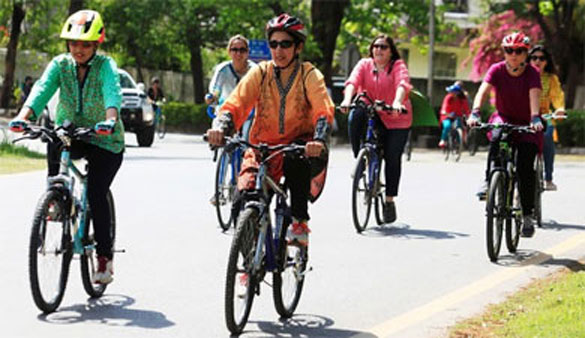 ISLAMABAD: Dozens of women in Pakistan took part in female-only bike races in major cities on Sunday, in an event organised to challenge male dominance of public spaces in the country.

"Our strategy is simply to be visible in public spaces," said Meher Bano of Girls at Dhabas, a feminist group which organised the races after a woman from Lahore was pushed off her bicycle by a group of men last year for not responding to catcalls.

The bike race was one of many events organised in the last few years by Girls at Dhabas - the name given to roadside restaurants - to promote female participation in public events, fight restrictions faced by women in public places and increase awareness. "I drive on these roads all the time but this was maybe the first time I got to experience them while biking," said Humay Waseem, one of the riders on the 5-kilometre race around Islamabad.

"I loved the feeling of freedom with the breeze in my hair."

Members of Girls at Dhabas say they are a new generation of Pakistani feminists determined to build on progress made by their predecessors.

"The women's movement is as old as Pakistan but it is not something that is really talked about or written about," said Bano.

Last September, an upcoming Pakistani fashion brand, called Do Your Own Thing, removed an advertising campaign on social media featuring a female flash mob after the women appearing in it faced online harassment.

Toronto-based photographer, Alia Youssef, is on a mission to prove that no two Muslim women are the same; and she does so in the most beautiful way. She created The Sisters Project, which is a compilation of portraits of Muslim women that portray the diversity of a group of people who are often subject to stereotypes.

The real faces of Muslim youth in New York

During a semester in a ‘Women in Islam’ course at Ryerson University, where Youssef is set to graduate from, a guest speaker said, “The media tends to paint all Muslim women with one brushstroke,” and this was the inspiration behind her series of photographs. She has since taken 25 portraits of Muslim women after hearing their stories and photographing them in a meaningful place.

Fifty Muslim women leaders gathered at the Kennedy School Friday, Saturday, and Sunday to discuss Islamophobia and the role of Muslim women in society at the first-ever National Muslim Women’s Summit.

Co-sponsored by the Women’s Initiative for Self-Empowerment and the Kennedy School, the summit kick-started a fellowship program for the women, and delegates brainstormed ideas to implement and continue the event’s mission elsewhere. According to Rana Abdelhamid, a Kennedy School student who organized the event, the idea for a Muslim women’s summit came before President Donald Trump was elected, but following the election, the need for it increased.

Abdelhamid added that a main goal of the fellowship was to empower young Muslim women to be “agents of change” across the world and “create a more sustained network and sisterhood of Muslim women.”

“I have been feeling very vulnerable lately as a Muslim woman and I wanted to get more tools to fight for people like me—to fight for Muslims, Arabs, and people of color in America today,” she said.

The summit offered workshops and speeches from activists geared toward building skills for successful activism, including workshops on fundraising and attracting an audience. Delegates brainstormed projects such as documenting the history of the hijab and the Muslim tradition of covering skin.

Haifa F. Al Kaylani, a fellow at the Business School and the founder and chairman of the Arab Women’s International Forum, a nonprofit that looks to empower female-led Arab businesses, spoke at the event about how to build and gain support from an audience.

In her speech, Al Kaylani encouraged delegates not to “take no for an answer” and commended the conference for fostering an environment for Muslim women to connect with each other.

Bushra Hamid ’20, who also helped organize the event, explained that the summit’s organizers aimed to congregate a group of diverse women from around the world to collaborate on making change. Hamid said organizers intend to follow the fifty delegates’ progress throughout the next year.

“They already have so many inspiring ideas,” she said. “The next step is staying in touch with these women.”

Hamid also said she hopes to expand the summit outside of Harvard in the future.

“We want to take the summit to other cities, not just Boston. We saw how successful it was at Harvard University. It can be successful elsewhere,” she said. “For now, I want to stay involved and grow this summit and potentially partner up with other organizations who do these conferences.”

Abdelhamid, who is from Queens, N.Y., intends to bring the summit to her hometown over the summer.

“This is part of a longer term vision I have of what it means to empower the young Muslim woman,” she said.

Two minors, a Hindu boy and a Muslim girl from the same village, were found hanging from a tree in Sikrara police station area of Jaunpur district on Sunday morning. Police suspect that the two were in a relationship and committed suicide thinking their families would not accept it.

The two, students of class 11 and 9 but different schools, lived in the same locality of Dudauli village. They had eloped about six months ago but were traced by the families and brought back, according to police.

Sikrara station officer Arvind Kumar Pandey said it appeared that the two left their homes late on Saturday night but the family members did not notice their absence until the villagers saw their bodies hanging from a tree in the village’s burial ground on Sunday morning.

“Prima facie it appears to be a case of suicide. The bodies have been sent for postmortem and the report is awaited. We would be able to say more after receiving the postmortem report,” said Pandey.

He said police did not find any suicide notes and the family members have also not raised any suspicion.

“The families are not saying anything about the relationship but that (relationship) appears to be the reason behind the incident,” said Pandey.