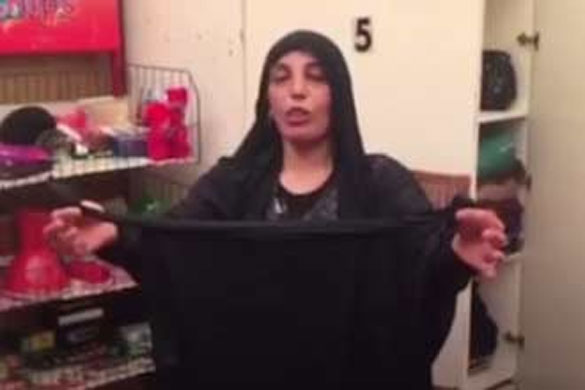 Photo: “This outfit is a fraud - it is a deception, when we used to wear it with our free will, it was beautiful. When it became obligatory and enforced it became despised. I don’t want it anymore,” -Radi Suleiman says.

•  Thousands Shared This 'Perfect' Story about A Man Confronting A Muslim Woman on A Bus – But Is It True?

This Woman Discarded Her Traditional Clothes in Protest at ISIS

Radi Suleiman first takes of the veil that covers her face and then the scarf that covers her head and throws both away from her. “When we used to wear it with our free will, it was beautiful. When it became obligatory and enforced it became despised. I don’t want it anymore,” she says.

Suleiman, 39, lived in ISIS-controlled Raqqa in northern Syria but has since escaped to Lebanon with nine of her 11 children.

Sitting in an well-kept refugee tent in Lebanon’s Beqaa Valley, she hates ISIS. At first she thought their presence would be relatively benign, until it started imposing rules on women about their dress – demanding they cover their heads and faces in public, and then forcing women to marry foreign fighters. “This outfit is a fraud – it is a deception,” she says.

As a Muslim women she says wearing the hijab is an important part of her culture, however, when a dress code is enforced – particularly in such an oppressive way—it becomes something to “despise.”

All of the armies kill and slaughter – the Kurds, the Iraqi army, the Free Syrian Army, Assad’s Army, but ISIS is “the most evil and criminal organisation,” she says.

They put the slaughtered bodies on the bridges to display them and “bring children and make them look at them”, she recalls. These children have “evil in their hearts” because of what they’ve seen – “you can’t even trust kids anymore” – you never know who they are with and who is training them, she says.

“I have seen things you can’t imagine,” says Suleiman. “I saw how they cut the hands and legs of men before they slaughter them,” she recalls.

Now, she pays $100 a month rent for the refugee tent near Zahle. Her tidy kitchen and neat bedrooms are testament to her defiance against the fate that has befallen her and millions of other Syrians in recent years.

The Daily Beast reported that a Twitter account called @old_gaes, whose account was created this month is now empty of any tweets, sent out a screencap of a tweet sent by a young Muslim girl, @Pharaohoe, who reportedly lives in Kuwait. The tweet composed by @Pharaohoe, an account that no longer exists, contained a passage from the Koran where the word "domain" had been replaced with a slang term for the word "vagina."

@old_gaes tweeted the screencap with a message in Arabic, saying, "This is the end of another atheist and we should continue exposing every Arab atheist child to their parents who do not know of their atheism," according to The Daily Beast. The Daily Beast further reported that the official Twitter account of the Dubai police department responded to one of @old_gaes' posts where the user called out a pro-LGBTQ woman and asked for details to be sent over email.

A woman who only identified herself as Afra spoke to The Daily Beast, saying that she and others have repeatedly reported @old_gaes and similar accounts who repeatedly threaten the safety of LGBTQ and ex-Muslim women living in the Middle East. Additionally, she imparted how dangerous their tweets are.

A woman who spoke to The Daily Beast anonymously said, "Twitter is absolutely useless. They don’t take this sort of thing seriously. I don’t know what the solution is." Afra said that "He’s [@old_gaes] so dangerous. I don’t know how his account is still up."

A Muslim woman and her infant child weren’t even safe in the supermarket.

On Monday, a woman and her four-month-old son were enjoying some late afternoon shopping at the Superking Supermarket in London, Ontario. According to a statement by London Police, at approximately 5 p.m., a woman wearing a shirt exclaiming “CANADA,” neon pink slip-on shoes and wide-legged black pants approached the unnamed victim and her baby and allegedly began screaming at them.

The suspect then reportedly attempted to rip off the victim’s hijab and, once it was askew, began tearing at her hair. Finally, she left the area but not before the victim snapped a few pictures of her.

In the photos, the woman stands with her face contorted with anger. She’s pointing an accusing finger at the camera. In one, her mouth is gaping, her eyes are narrowed and one hand is balled into a fist — the picture of hatred.

“We would like to find out ourselves what … the motive was,” London Police spokesperson Sandasha Bough told CBC. “After that, then we will continue with the investigation. It’s definitely very concerning for anyone to be assaulted for no apparent reason.”

It’s the second aggression against Muslims in Canada since the beginning of Ramadan, the holy month of fasting observed by Muslims around the world.

The other occurred around 2:30 a.m. Sunday

A man had finished praying at the Quebec City mosque. As he opened the door to leave, he noticed a package on the doorstep.

It must have looked like a nice present at first glance, with bushy ribbons decorating the top, accompanied a note with the words “Bonne appétit” written in thick, black capital letters.

A closer look would reveal an odd detail: The picture of a pig, exposing its underbelly in a seductive sprawl, the kind bikini models long ago made famous.

An even closer look would reveal it to be a grotesque package.

Wrapped in the crinkly cellophane, under bright bows, was a bloody, fleshy mass: A severed pig’s head, still dripping fluids. Observant Muslims do not consume pork and leaving a pig’s head at a mosque has become an all-too frequent gesture of hate among anti-Muslim bigots across the globe. A similar incident occurred in Philadelphia last year.

The president of the mosque did not appear worried about catching the perpetrator.

“It is a waste of time, money and energy. We have high-definition cameras,” Mohamed Yangui told CBC. “We will certainly find the person who did this.”

Yangui thinks it’s an isolated incident — he said this happens about once a year — and he thinks the mosque has a good standing in the community.

“We love everyone,” Yangui said. “We have no problem with anyone and we respect people. We hope it’s mutual. And we are always here to give the image of the good Muslim to all Quebecers.”

Others, though, feel differently.

“I’m tired, I’m exhausted. I am hurt and I’m disappointed,” Saleha Khan of the National Council of Canadian Muslims told CBC. “Part of me doesn’t want to give up hope, because if I give up hope, I’ll probably curl up and never want to come out in public. You just sort of buckle down and say, OK, I’ve got more work to do now.”

At an open house held Sunday in Quebec City to discuss relations between Muslims and the community, Jean-Yves Duclos, the federal minister responsible for the Quebec City region, condemned the act.

“Any form of intolerance, hatred and unjustified incomprehension has to be condemned,” he said. “We must continue to promote inclusion and integration.”

Thousands Shared This 'Perfect' Story About A Man Confronting A Muslim Woman On A Bus – But Is It True?

A Facebook post about an encounter on a bus in Wales has gone viral this week, being shared more than 21,000 times in a little over 24 hours.

It was posted by music promoter Tom Bradbury, who wrote: “The most perfect thing I have ever seen just happened on the replacement train bus service between Newport and Cwmbran: White man sat in front of a mother and her son. Mother was wearing a niqab.

"After about five minutes of the mother talking to her son in another language the man, for whatever reason, feels the need to tell the woman 'When you're in the UK you should really be speaking English'.

"At which point, an old woman in front of him turns around and says, 'She's in Wales. And she's speaking Welsh'.

His story proved immensely popular, and has been reported on by the Times, the BBC and the Huffington Post among others.

However, many observers are now questioning whether the story is too good to be true.

Several people have pointed out that the story bears a remarkable similarity to another story that has apparently been doing the rounds for years. Here's one version of it:

He also told the South Wales Argus: "The woman's response was … just so perfect.

"It made the few of us in the surrounding seats laugh and the guy seemed to shrivel up a little bit and mumble something to himself, but stayed quiet afterwards."