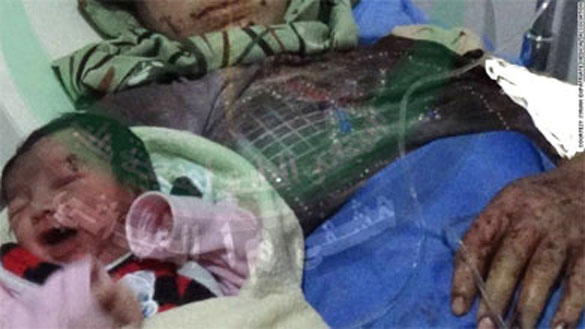 A newborn baby came into this world bearing a scar of war on her forehead.

•  Woman Poisoned To Death over Dowry in Pakistan

A baby girl has been born with shrapnel lodged in her head in Syria after her pregnant mother suffered horrific injuries in a rocket attack. The woman, named locally as Amira, had to undergo an emergency caesarean section at a hospital in Aleppo.

Graphic footage posted on Facebook by the Aleppo City Medical Council showed doctors, delivering the lifeless and pale child, who had a piece of shrapnel that had pierced her mother's womb embedded in her forehead. Doctors suggested the name Amel, meaning Hope, in honour of the child's miraculous survival.

"She wasn't even born, and she was targeted," Dr Mohammed Tabbaa, from the Syria Expatriate Medical Association, told CNN. "I mean, that's the situation.I'm hoping she'll have a better future." An update posted on the M1hospital's Facebook page on Wednesday showed mother and baby resting in bed and said they were both in good health.

Amira and her three older children were injured in the air strike on September 18, CNN reported, which was blamed on President Bashar al-Assad's regime by medics.

JERUSALEM: The Zionist state on Thursday defended the actions of its soldiers who shot dead an armless 18-year-old Palestinian woman at a checkpoint in the West Bank as questions swirled over the events that led to the killing.

Hadeel Al-Hashlamon was gunned down by Israeli forces on Tuesday at a checkpoint in the flash point city of Hebron. The military said she was attempting to stab a soldier when they opened fire.

Activists have however distributed photos purporting to show the fully veiled woman with no knife visible at the checkpoint. The pictures however do not capture the moment of the shooting.

The Israeli military on Thursday maintained its initial version of events and provided further details of what it said occurred. It said a preliminary review had been opened as is standard for fatal incidents.

The woman’s father said at her funeral on Wednesday that she was innocent and had been killed by multiple shots while posing no threat.

An activist with the Youth Against Settlements group that distributed photos purporting to show the woman at the checkpoint before her death said he arrived at the scene shortly afterwards and saw no knife.

“She did not have a knife,” said the activist, Issa Amro. “She was murdered in cold blood and was not a threat to the soldiers.”

The killing came with tensions high in the occupied West Bank and Jerusalem after three days of clashes last week at Al-Aqsa Mosque compound.

Woman Poisoned To Death over Dowry in Pakistan

SIALKOT: A woman was poisoned to death allegedly by her husband and in-laws at Behaaripur-Motra village in Daska tehsil on Thursday for not bringing their desired dowry.

Aneeba Shehzadi, 26, belonged to a poor family and her husband Asadullah and in-laws used to beat her physically.

Her father Allah Ditta, a labourer, told the police that Asad and his other family members had quarrelled with her as punishment for not bringing dowry of their choice and administered her poison.

He said the neighbours shifted Shehzadi to the Daska Civil Hospital where she passed away. The doctors said she died of poison. Motra police said Asadullah and his family had escaped after the incident. A case has been registered.

ISLAMABAD: The Foreign Office has said that Pakistan is fully cooperating with the Indian High Commission for return of the Indian girl, Geeta, who entered the Pakistani territory 13 years ago by mistake. In a statement, the Foreign Office said no condition has been set for Geeta to report to the Foreign Ministry for obtaining permission to travel back to India. It said the foreign office is in contact with the Indian High Commission in this regard; however it is responsibility of the Indian side to prepare travel documents for the girl. After 13 years, India accepted Geeta as its citizen.