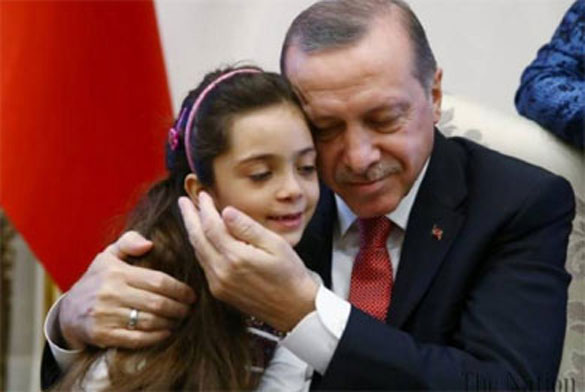 •  If Extradition Necessary, Aafia Should Be Exchanged, Suggests Fowzia

•  Muslim Woman, Married to a Syrian, Could Be Romania’s PM

A seven-year-old Syrian girl who drew global attention with her Twitter updates from besieged Aleppo met Turkish President Tayyip Erdogan at his palace in Ankara on Wednesday.

Photographs released on Erdogan's official Twitter account showed the president hugging Bana Alabed as she sat on his lap.

Bana and her mother Fatemah were evacuated safely along with 25,000 other people from the rebel-held eastern part of Aleppo this week. Turkey has supported rebels fighting Syrian President Bashar al-Assad.

"I was pleased to host @AlabedBana and her family at the Presidential Complex today. Turkey will always stand with the people of Syria," Erdogan said on his official Twitter account.

Helped by her mother, who manages the @AlabedBana account, Bana Alabed has uploaded pictures and videos of life during the nearly six-year-old Syrian war, gaining around 352,000 followers on the micro-blogging site since September.

Turkish Foreign Minister Mevlut Cavusoglu said when Bana and her mother were evacuated from Aleppo that she would be brought to Turkey with her family.

The eventual departure of thousands left in Aleppo's insurgent zone will hand full control of the city to Assad, the biggest prize of the nearly six-year-old civil war.

The Nigerian news outlet Pulse reports that Hajiya Ramatu Tijjani, who is known locally as a Muslim peace ambassador, donated bags of rice and other food staples to at least 50 widowed women at the Christ Evangelical Church Ministry in the town of Sabon Tasha in the Kaduna state.

According to Pulse, Tijjani's food donation was part of her larger effort to create a peaceful coexistence between the different faith groups in the area. Her donation is also an attempt to limit the hardships that the widows face this time of year.

Tijjani is now calling on her Muslim brothers and sisters to follow in her generous footsteps by giving to Christians in need, adding that Muslims need to take the opportunity of the holiday season to show goodwill toward the Christian community in Kaduna.

As Open Doors USA currently ranks Nigeria as the 22nd worst country in the world when it comes to the persecution of Christians, Christian communities in Nigeria have faced numerous deadly attacks from Islamic extremist groups like Boko Haram and from Muslim Fulani herdsman.

Tijjani's donation comes after Yahanna Buru, the pastor at the Christ Evangelical Church Ministry, has for the past few years distributed food and beverages to internally displaced people, prisoners and the poor during the Muslim holy month of Ramadan.

As Buru has cooked meals for Muslim widows and orphans celebrating the end of Ramadan, Tijjani explained that it was his generosity toward people of the Muslim faith that inspired her to help Christians during the Christmas season.

In giving thanks to Tijjani for her donation, Pulse reports that Buru prayed for God to bless and reward her for her kind gesture.

Tijjani's food donation is not the first act of generosity that she has made toward the Christian community in Kaduna.

In February, Tijjani and a group of Muslim women donated Bibles written in the African language of Hausa to Christian leaders in the Kaduna state in celebration of Interfaith Harmony Week.

The women donated the Bibles after having attended a worship service at Christ Evangelical Church Ministry.

"I attended the church service and give my own donation like every Christian just to encourage religious understanding and tolerance between Christians and Muslims for peaceful coexistence in the country and the world at large," Tijjani told Pulse at the time.

Tijjani is also calling on the Nigerian government to create institutions that will be responsible for coming up with solutions to Nigeria's interfaith conflicts. Such institutions would also help promote religious tolerance in the nation.

If extradition necessary, Aafia should be exchanged, suggests Fowzia

Karachi: The sister of Aafia Siddiqui and leader of Aafia Movement, Dr Fowzia Siddiqui has said the special assistant to the Prime Minister, Tariq Fatemi has told the nation that Pakistan is ready to seek ways and means to resolve the matter of Dr Shakil Afridi, but he did not tell what steps his government has taken for the release of the innocent Aafia. She reminded that the honorable courts have already issued orders to the government to take steps for the repatriation of Dr Aafia.

In a statement here Wednesday, she said that the US envoy has already said that they are ready to exchange Dr Aafia for Shakil Afridi. She said that the newly elected US President Donald Trump during his election campaign had claimed that he could bring back Shakil Afridi on just a two-minute telephone call, adding and now it also seems happening. She said after the phone call of the US president-elect to Prime Minister Nawaz Sharif, Tariq Fatemi rushed to a visit to the USA and after his return he told in a media briefing that Pakistan is ready to find ways and means to resolve the issue of Pakistani doctor Shakil Afridi.

She said this statement has created many suspicions. Pakistan has already handed many convicts over to the United States of America. She said that extradition of the killer Raymond Davis should have been used for extradition of Aafia. She reminded that a few years back when Raymond Davis killed Pakistanis in broad daylight, the Pakistani government said that he is a criminal and he would not be freed, but today he is a free person. She said the government had also expressed same stance on the issue of Shakil Afridi but now it is being hinted that it is ready to free him.

She said if the government and the state of Pakistan have no other option but to hand over a criminal to the America, they should seek an honorable release and repatriation of the daughter of the nation, Aafia Siddiqui in exchange; at least save our face as a nation and country.

Muslim woman, married to a Syrian, could be Romania’s PM

Romania could be headed for its first female prime minister, an economist who is a member of Romania’s small Muslim community.

Liviu Dragnea, chairman of Romania’s Social Democratic party, which won the Dec. 11 parliamentary election, proposed Wednesday that Sevil Shhaideh take the post of prime minister. The announcement was a surprise because her name is not widely known in Romania.

She married 64-year-old Syrian businessman Akram Shahida in 2011,  who is originally from Latakia.

President Klaus Iohannis is consulting with political leaders before nominating a prime minister, who Parliament needs to approve. If approved, she would also become the country’s first Muslim prime minister.

Dragnea is banned from being premier because he has a conviction for election fraud.

Sevil Shhaideh is sworn in for the position of minister for regional administration and public administration, in Bucharest, Romania, May 20, 2015. (Reuters)

On Wednesday, Dragnea called his April 2016 conviction “unjust” and said the law that stops him from being premier was “profoundly unconstitutional.” The new Parliament could vote to change the 2001 law that bans anyone with a conviction of holding a ministerial post.

Dragnea, who continues as head of the party, is expected to have significant influence over a government headed by Shhaideh.

“If appointed, she would be prime minister, but the political responsibility stays with me first of all,” Dragnea said, praising Shhaideh for her knowledge of public administration and for being hard-working and loyal.

The left-leaning Social Democrats easily won the Dec. 11 parliamentary election but did not secure a majority and will govern with a minority partner.

“National service seeks to build the character of the conscripts, deepen the values of loyalty and sacrifice for the nation, and instil discipline and develop skills so that they carry out their responsibility and depend upon themselves and create an environment of fair competition and co-operation, and work as one team,” said Colonel Afra Al Falasi, Commander of Khawla Bint Al Azwar Military School, in her address at the ceremony.