• No Women’s Photos in Advertisements: Taliban 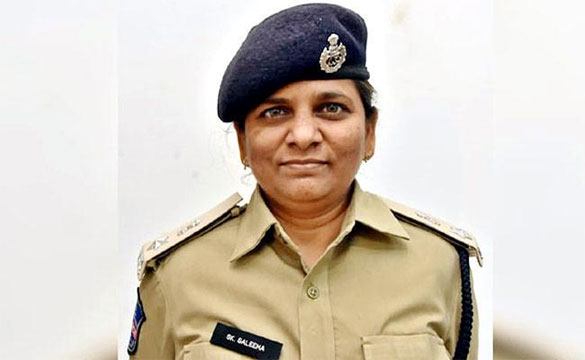 Hyderabad: Sheikh Saleema is Telangana’s first Muslim woman non-cadre IPS officer after she was promoted by the Union Ministry on Tuesday. She is currently posted as the additional Deputy Commissioner of Police in Rachakonda.

Saleema was promoted alongside 20 other police officials, to fill up 23 substantive vacancies in the Telangana Cadre. The total number of IPS officers in the state has gone up to 110.

She is the daughter of a retired sub inspector of police Lal Bahadur and Yakubi, from Komatlagudem village in Chintakani Mandal, Khammam.

Saleema completed her post graduate in bio technology from Kakatiya University and was selected as Deputy Superintendent of Police (DSP) in Kagaznagar, Adilabad in 2007. She has also served as the vice-principal of Police Training College of Amberpet and additional commissioner of administration in Madhapur.

Saleema belongs to an educated family and has three younger siblings- two sisters, Zareena and Munni and a brother, Qasim.

Zareena recently cleared her Group-1 mains from Andhra Pradesh and is scheduled to be interviewed for government services, whereas Munni is a motor Vehicle Inspector at Khairatabad, RTO. Her brother Qasim is a doctor at Care Hospitals in Hyderabad and her spouse works for the software industry.

No Women’s Photos in Advertisements: Taliban 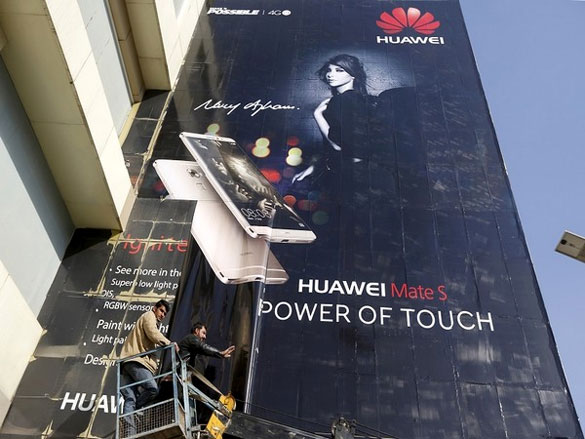 The Taliban banned the use of photos of women on storefronts in Kabul city.

The spokesman of Kabul municipality, Nematullah Barakzai, said the government has ordered the municipality’s officials to remove all photos of women on the signboards of shops and business centres in Kabul, reported Tolo News.

“Based on the decision of the government, the photos that are against Islamic regulations will be collected or removed from billboards,” said Barakzai.

The owners of beauty salons in Kabul criticized the decision of the Islamic Emirate, and asked the government not to impose restrictions on their business, reported Tolo News.

Shayesta Saifi, a makeup artist, has worked in a beauty salon for seven years. Shayesta said she is financially assisting her 10-member family.

“This is imposing a restriction on women’s work. There is a fear that they will lock our shop in the next few days,” she told Tolo News.

“What does it benefit the government to remove photos of women?” said Parwana, a women’s rights activist.

JEDDAH – Saudia Cargo has signed a sponsorship agreement with the Kingdom of Saudi Arabia’s first female, accredited rally driver at Rally Dakar, Mashael AlObaidan, as part of the company’s continuous contributions to the Kingdom’s various entertainment and sporting events.

The 33-year-old ambitious driver is ready to take part in Rally Dakar in 2022, as the first Saudi and Arab female participant, in the prominent worldwide race event. The event will kick off next year in Saudi Arabia for the third time in a row with drivers of 70 nationalities participating in Rally Dakar’s five different categories.

The rally track will start from the City of Hail ending in Jeddah and is famous for being the world’s longest and hardest rally track where drivers cross multiple cities facing different weather conditions and challenging complex topographies.

In line with Vision 2030 that recognizes a successful, modern nation must empower all members of society, including women, Mashael aspires to lead a new generation of female rally racers in the Middle East, and represent women empowerment across motorsports in Saudi Arabia.

She is the first Saudi and Arab female to obtain a rally license in Saudi Arabia. Soon after becoming the first female licensed rally driver in KSA, Mashael placed 1st in the T3 category at Sharqiyah Rally and 5th overall out of 19 racers.

To sponsor Mashael AlObaidan was greatly welcomed by Saudia Cargo CEO Teddy Zebitz, who believes this step will support Saudis and enhance their performance in worldwide sporting tournaments while presenting the image of the empowered Saudi woman who proudly achieves successful national milestones with remarkable outcomes.

“We realize the importance of all events hosted by the Kingdom and the active role we play by utilizing our capacities and logistics services to ensure the success of such premium and challenging races,” Teddy Zebitz stated. “It is important to recognize the shared values and attributes between rally drivers and Saudia Cargo, where both face challenging routes, undergo long-haul races, and recognize the necessity of overcoming obstacles with great elegance under pressure.

This requires agility, flexibility and unwavering resilience and commitment. These are the qualities and standards that drives us daily, as we deliver our services around the world. Clearly, the common values between Saudia Cargo – that exists to serve our global community – and rally driver Mashael AlObaidan are distinctly recognizable.”

With pride, Mashael stated, “It is an honor to participate in one of the toughest rallies in the world, with Saudia Cargo as a partner. Thanks to Saudia Cargo’s sponsorship, I have reached a major milestone in my career. This is an exciting time for me on several levels, primarily as having the opportunity to represent my country, and to honor the tenets of Vision 2030 in progressing the Kingdom forward.”

Mashael AlObaidan became the first Arab female driver from GCC to take part in the international Rally Dakar following her participation in the Spanish Baja Aragon Rally – the fifth stage of the World Cup for Cross-Country Bajas organized by FIA. Mashael also managed to finish second in the T3 category of the Hail International Rally in Saudi Arabia – the final round of the FIA World Cup for Cross-Country Rallies – making her way through as the first Arab female rally driver to win a title in this race. – SG

“We express our condemnation and outrage at the brutal assault on Palestinian female prisoners, including placing some of them in solitary confinement,” the Moroccan Women Against Political Detention said in a statement.

The NGO stressed its "full solidarity with the Palestinian female prisoners brutally assaulted by the Zionist repressive apparatus inside prison.”

It also demanded the immediate release of all Palestinian prisoners from Israeli prisons.

On Tuesday, the Prisoners' National Movement, a group representing Palestinian prisoners, called for dedicating the coming Friday to show solidarity with Palestinian female prisoners in Israel.

Palestinian factions have earlier called for “an appropriate response” to attacks on female prisoners in Damon and Nafha prisons.

There are around 4,500 Palestinian detainees in Israeli prisons, including 32 women, and 170 minors, according to institutions concerned with prisoners’ affairs.

Hundreds of women marched in Omdurman and protests hit other Sudanese cities on Thursday in response to allegations that 13 women were raped during anti-military rule protests earlier in the week.

The United Nations Human Rights Office received 13 allegations of rape and gang rape by security forces during the protests on Sunday.

That demonstration drew hundreds of thousands of people to the capital Khartoum to protest against a military coup on Oct. 25. They converged on the presidential palace, where they attempted a sit-in before being dispersed by security forces after sundown.

Women’s groups organized Thursday’s marches, supported by neighborhood resistance committees and political parties, around the capital Khartoum, neighboring Bahri and Omdurman, as well cities across the country including Kassala, Damazine, Kosti and Kadugli, according to images shared on social media.

“They use rape to scare us from pouring into the streets or for our families to prevent us from protesting, but we will not stop, we will not be afraid, and we will resist,” said activist Walaa Abdelaziz, protesting in Omdurman.

Some of the protesters beat drums, while others chanted, “The military belongs in the barracks, and the streets are full of women.”

Suleima Ishaq, director of the Combating Violence Against Women Unit, a government agency, said the group gave medical aid to eight rape victims. She described the assaults as “systematic.”

“The protests on December 19th were dispersed using unprecedented violence...It was a method involved in the dispersal of this protest to use sexual violence, so we don’t believe that it was a coincidence or a one-off event.”

In a statement, the United States, European Union, UK and other Western countries condemned the rapes and urged that “perpetrators are held accountable regardless of affiliation.”

“This protest proves that we will not be broken no matter what,” said activist Amira Gomaa. “We consider those who carried out those acts against women wolves who need to be prosecuted, and there will come a day when they will be prosecuted and we know every single one of them.”

At least three Palestinian female prisoners in solitary confinement at an Israeli jail have gone on an open-ended hunger strike in protest at their mistreatment.

The Palestinian Asra Media Office, which focuses on prisoner affairs, reported that the rest of the female inmates at the notorious Damon prison will join the hunger strike in stages.

The hunger strikers were identified as Mona Qaadan, Marah Bakir and Shurouq Duwaikat from the occupied Palestinian territories.

The report said the situation in Israeli prisons is escalating, with the Israel Prison Service (IPS) refusing to meet the demands of the prisoners.

Their decision came amid reports of the abuse and mistreatment of female prisoners at the prison.

The Palestinian Prisoners Society (PPS), in a recent statement, said Israeli forces had violently raided the cells of the female Palestinian detainees and severely beaten them, injuring some of them.

The escalation came amid new restrictions depriving the prisoners of family visits and preventing them from purchasing items from the canteen, as well as  imposition of fines on them.

Female prisoners have been allowed to see only one adult member of their family since the onset of the coronavirus outbreak and the suspension of family visits for Palestinian prisoners.

According to the PPS, dozens of Palestinian women have currently been languishing behind bars at Israel's notorious Damon prison. They are subjected to very harsh conditions and constantly monitored through surveillance cameras.

The female Palestinian prisoners have to spend most of their days in damp and humid rooms, particularly in the winter, the PPS said.

In September, 26-year-old Anhar al-Deek, in her ninth month of pregnancy, was released from Damon prison to house arrest in the village of Kafr Nai’ma in the West Bank after paying a bond of more than $12,000.

A number of rights advocacy groups earlier this year reported on the occasion of International Mother’s Day that Israel was holding several Palestinian mothers in jail, adding that they are subject to various kinds of torture and not allowed to meet with their relatives.

Since 2015, the number of Palestinian women who have been arrested has reached more than 900, among them mothers of prisoners, martyrs and minor girls, according to a report by the Palestinian Prisoners Club (PPC) and the Addameer Prisoner Support and Human Rights Association.

More than 7,000 Palestinian prisoners are currently held in some 17 Israeli jails, with dozens of them serving multiple life sentences.

Hundreds of detainees, including women and minors, are being held under the so-called administrative detention in various Israeli prisons, with some of them being held in that condition for up to 11 years without any charges.

The detention takes place on orders from a military commander and on the basis of what the Israeli regime describes as "secret" evidence. Israeli jail authorities also keep Palestinian prisoners under deplorable conditions.

Multiple Palestinian factions have called for a "day of rage" on Friday in support of the prisoners.

Hamas officials have warned that crossing the "red lines" in treatment of prisoners would have "repercussions on the region."