Sharia Punishment: Woman Collapses As She's Lashed With Cane for Having Sex Outside Of Marriage in Indonesia

Sharia Punishment: Woman Collapses As She's Lashed With Cane for Having Sex Outside Of Marriage in Indonesia 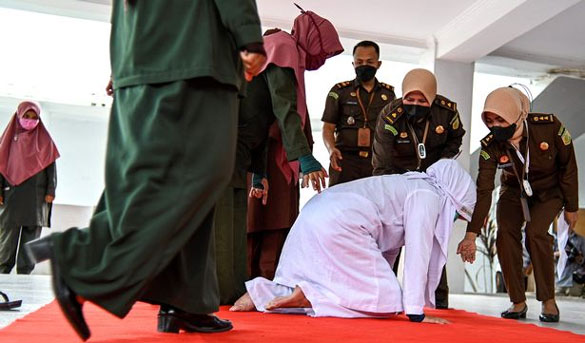 The woman can be seen collapsing from the caning ( Image: AFP via Getty Images)

A woman who was publicly lashed for having sex outside of marriage can be seen collapsing in agony during the brutal Sharia punishment.

The shocking images are from the Indonesian city of Banda Aceh where the unnamed woman was whipped 17 times with a cane along with her partner.

An official, called an Algojo, carried out the beating dressed in a traditional brown gown and their face was covered by a domino-style mask, reported the Daily Star.

The woman receiving the lashings was wearing a long white cloak and head dress as she knelt down in front of the watching public.

After several strikes with the bamboo cane she can be seen falling forward from the pain.

Her partner was seen staring forward at the crowd as he was also flogged.

Aceh is the only Indonesian province which operates under Sharia law - which sees rules governed by a radical interpretation of Islam's holy book the Quran.

For the most serious crimes under Sharia law like cases of homosexuality, people can receive up to 150 lashes and it is not uncommon for them to lose consciousness or receive hospital treatment afterwards.

In 2018, the local government pledged to end its policy of public corporal punishment, saying that future floggings would take place in prisons instead. However, despite that promise, the number of public floggings and canings has actually risen, reports the Daily Mail.

A man who was given a hundred lashes of a cane in Aceh, in June last year, was seen collapsing under the blows.

His crime was to have engaged in pre-marital sex and the caning was halted until he was revived and then then the whipping continued.

The 22-year-old man had begged a masked Sharia officer to stop lashing his back with a rattan cane before passing out.

Victims are allowed medical attention and he was treated before the flogging carried on. Then when he had been given the full 100 whips he was taken to hospital.

There is an elite all-female flogging team that whips women who have broken Sharia law.

The team of eight women have been trained to flog, show no pity and how to minimise permanent injury.

Banda Aceh Sharia police chief investigator Zakwan said: "We train them to make sure they're physically fit and teach them how to do a proper whipping.

"It's kind of an indoctrination that we give to them so they have a better understanding of their role – have no mercy for those who violate God's law," he added.

The UAE has updated Covid safety protocols for congregational prayers at mosques. Women’s prayer halls will reopen, and so will ablution areas and washrooms.

Even though mosques across the country reopened with Covid safety protocols in July last year, women’s prayer halls remained shut. Authorities in Sharjah had reopened them last week.

In ablution and washroom areas, worshippers must maintain a social distance of 1.5 metres. They must be cleaned and sterilised before each prayer.

Awareness pamphlets on Covid safety rules in Arabic, English and Urdu must be put up at mosques.

“We would like to point out that mosques will be closed immediately after each prayer,” said Dr Saif Al Dhaheri, the official spokesperson for the National Crisis and Emergency Management Authority (NCEMA).

Imams and cleaners must be vaccinated against Covid-19 and take PCR tests every 14 days, the official added. 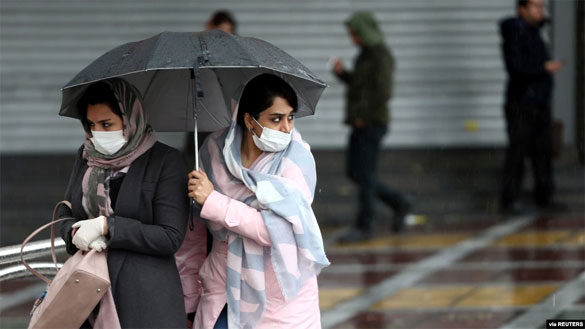 Human Rights Watch warned Wednesday that a new Iranian law aimed at raising the birth rate would put women's lives at risk by denying them access to reproductive health care.

The bill, which is expected to become law later this month, provides various additional benefits to families with children and outlaws sterilization and free distribution of contraceptives in the public health care system unless a pregnancy threatens a woman's health.

"The population growth law blatantly undermines the rights, dignity and health of half of the country's population, denying them access to essential reproductive health care and information."

Over the past decade, Iran has shifted its population policy from providing family planning and access to contraception, to seeking to boost population growth by limiting women's access to sexual and reproductive health care.

Currently, abortion can be legally performed during the first four months of pregnancy if three doctors agree that a pregnancy threatens a woman's life or the fetus has severe physical or mental disabilities that would create extreme hardship for the mother.

The step was announced amid Saudi keen interest in promoting the status of women and enhancing their integration into public affairs and the labour market as well as their contribution to development. The Saudi Institute of Public Administration (IPA) has recently unveiled a plan to set a centre for promoting gender balance in Saudi Arabia.

In this regard, the Saudi Institute of Public Administration extended an invitation to the Supreme Council for Women (SCW) to provide an overview of Bahrain’s national gender balance model.

Al Ansari made the statement during a forum which was held by the Gender Balance Centre, an offset of the Institute of Public Administration, under the theme “Bahrain’s Approach for Women’s Advancement and Gender Balance”.

The two sides are set to sign a memorandum of understanding in this regard.

Other Saudi officials and experts specialised in public administration, gender balance and follow-up of the implementation of the 2030 Saudi Vision also participated in the forum.

The SCW delegation addressed the event, shedding light on Bahrain’s multi-phased approach of promoting the status of women and achieving gender balance.

Al Ansari stressed the importance of cooperation to exchange expertise between the two countries to further integrate women in reform and modernisation projects and enhance their contribution to development.

She underlined Bahrain’s strides since the establishment, 20 years ago, of the SCW, chaired by Her Royal Highness Princess Sabeeka bint Ibrahim Al Khalifa, Wife of His Majesty the King.