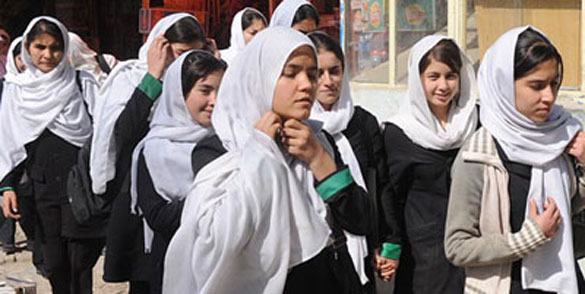 •  Breaking the Silence: Alternative Means Of Reporting Rape In Pakistan

•  Conference on 'Fatima al Zahra, Leader of the Women of the Worlds'

•  Indian-origin Asha Patel gets the 'best job in world'

Several school girls were poisoned in a high school in capital Kabul on Wednesday morning.

A school teacher in Sultan Razia high school said the incident took place after the students entered to their classroom which was sprayed with the toxic material.

According to the school teacher the students were immediately taken to the hospital for treatment purposes using three ambulances.

In the meantime Afghan education ministry officials confirmed the report and said around 20 school girls have been taken to the hospital so far.

Sultan Razia high school is located in the 7th district of Kabul city in Chel Situn area where hundreds of students are attending their studies on daily basis.

This comes as over 60 school girls were poisoned due to unknown reasons in the capital city of northeastern Takhar province last month.

The incident took place in Bibi Maryam girls high school early Sunday morning on 19 of April last month, and the students were taken to hospital for treatment purposes.

Several dozen of gas attacks against girl schools have been reported across Afghanistan over the past couple of years.

No group or individual has claimed the responsibility for the incidents so far. Radical Islamic groups and anti-government militants had in the past been blamed for such gas attacks.