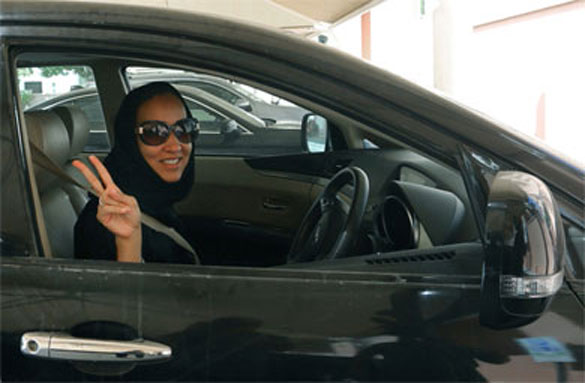 Saudi women have spent $3.1m on obtaining driving licences from the UAE, Bahrain and Jordan in the build-up to the lifting of the kingdom's female driving ban.

•  Iran: Deaths of 11 Pregnant Women, 39 Children under 5 in Kermanshah

Saudi women have spent $3.1m on obtaining driving licences from the UAE, Bahrain and Jordan in the build-up to the lifting of the kingdom’s female driving ban next year, according to reports.

Arabic publication Al-Watan cited sources as confirming the figures, which is derived from an estimated fee of SAR1,540 ($411) for each of the 7,550 licences issued in the countries.

Women are generally required to attend more than 22 hours of training courses and pass tests before obtaining licences the UAE, Bahrain and Jordan.

Reports last month suggested travel agents were taking advantage of the desire by women to be ready for the lifting of the ban by June 24 next year.

Driving schools in the kingdom will not begin accepting women until March, according to local reports.

Al-Watan said agencies in Jeddah were offering five-day packages with air tickets, accommodation and several hours of lessons to take advantage of domestic demand until then.

Under recent rule changes from Saudi’s Directorate General of Traffic, drivers must take 30 to 120 hours of lessons before taking a test to obtain a licence.

A survey released in October indicated more than four fifths of women in the kingdom plan to get behind the wheel when the ban is lifted.

Iran: Deaths of 11 pregnant women, 39 children under 5 in Kermanshah

A Kermanshah health official announced the deaths of 11 pregnant women and 39 pre-school children in the quake-stricken areas of Kermanshah Province in western Iran.

He did not explain the reason for the deaths of the children and sufficed to make a general statement on the deaths of pregnant women, saying they were “due to the problems caused by the earthquake.”

In the first couple of days after the earthquake, three children died because of being homeless despite the freezing cold and lack attention from the government.

The draft bill proposes three-year jail with no scope for bail for the controversial Islamic practice that allows men to leave their wives immediately by saying "talaq" or divorce three times.

The Uttar Pradesh government approved the draft bill Tuesday night at a meeting of the state cabinet chaired by Mr Adityanath, who is also the head priest of the Gorakhnath temple, news agency Press Trust of India reported.

"The centre's draft bill on 'triple talaq' has been endorsed by the cabinet. The centre had asked the states to send their respective views on it by December 10," Uttar Pradesh government spokesperson and cabinet minister Siddharth Nath Singh said.

In doing so, Uttar Pradesh has become the first state to endorse the draft bill to be introduced in the winter session of parliament starting December 15, a government official familiar with the matter said.

The Supreme Court in August banned the practice of "triple talaq", calling it "unconstitutional". The verdict vindicates the stand of the government, which had said "triple talaq" violates fundamental rights of women.

"Sixty-six cases of instant 'triple talaq' have been reported after the Supreme Court order this year... Uttar Pradesh tops the list," said the official who asked not to be named.

The Supreme Court verdict was delivered by a panel of five judges from different major faiths -- Hinduism, Christianity, Islam, Sikhism and Zoroastrianism. Arguments concluded in May.

Several Muslim women who have been divorced because of it, including on Skype and on WhatsApp, had appealed to the top court to end the practice.

The All India Muslim Personal Law Board (AIMPLB), a non-governmental body which oversees the application of Muslim personal law, opposes any ban on "triple talaq" and argues this is a religious matter and not for the courts.

The BJP has long pushed for a uniform civil code to be enforced which would end the reach of different religious laws in civil issues, sanctioned originally to protect the independence of different faiths.

Commission chairperson M C Josephine said the insults and sexually explicit social media attacks were an insult to the state and hurt the dignity of women and that the commission would take deterrent steps.

Several flash mobs — a group dance that looks like an impromptu jig on a street — performed on December 1 at the Kottakkunnu junction, in front of a state bus depot, in Mallapuram. In one of the flash mobs were the three women dancing to Jimmikki Kammal, a popular Malayalam film song. The health department of Mallapuram district organised several events on AIDS awareness, among them the flash mobs.

Unsavoury comments were made on social media when the video started circulating. Those who backed the performance were not spared either. The women are students of Educare Dental College. They were among 50 students from the campus who were part of the AIDS awareness event. The college’s mass media officer (of the health department) Gopalan Kutty said: “The college volunteered to take part in the awareness programme. Of the 50 students, 15 participated in the flash mobs. In one performance, only three girls participated. Unfortunately, the video of that show was circulated on social media. In the other flash mobs, there were girls from Hindu, Muslim and Christian communities. In fact, the college had come forward to conduct the flash mobs.’’

College administrator Abdul Razak said: “We have no complaints against the girls participating in the flash mob wearing hijab. We believe these students have the freedom to stage such a performance. The trouble started when someone singled out three Muslim girls and circulated their video on social media.”

Nazer Faisy Koodathai, the general secretary of Samastha Kerala Sunni Students’ Federation, said a religion cannot be blamed for comments by orthodox elements of a community. “Religious scholars and preachers have the freedom to speak on an action as right or wrong. Islam does not encourage women dancing in public. However, it is up to each person to accept to refuse it,’’ he said.

A radio jockey in Doha, R J Sooraj, who appreciated the women’s courage, lashed out at the trolling against them.

In the video uploaded on Facebook, Sooraj asked why were those who speak about the freedom of Hadiya (a Muslim convert whose nullified marriage is being heard by the Supreme Court) not respecting the freedom of these girls. He too came under fire from trolls.

On Tuesday, Sooraj said extremist elements on both sides were exploiting his comments. “For the time being I am keeping away from the job of jockey at Radio Malayalam. I tender apology if my comments have hurt the religious sentiments.”

“In the past, I have never tried to defame any religion. I will never do so. Please consider this as a mistake. My politics has never been aligned with RSS-BJP-Sangh Parivar…. I have had Communist leanings. I will never take up such issues again. I realised that this issue has crossed limits and is even being given a communal tinge. That was not my intent,” Sooraj said.

Sooraj’s public apology and withdrawal from the show is learnt to have stemmed from the displeasure of the radio show’s management in Doha and among the Muslim community there.

PESHAWAR: The Khyber Pakhtunkhwa government on Wednesday announced policy guidelines for the women’s empowerment in the province.

The announcement was made by Chief Minister Pervez Khattak during a ceremony organised by the social welfare department and Parliamentary Women Caucus Committee at the Chief Minister’s House here.

The guidelines were prepared by the social welfare department, Parliamentary Women Caucus Committee and UN Women.

The policy is focused on the greater role of women in legislation, provision of better employment opportunities and facilities in public transport to them and end to aggression against them.

The CM said a 16-day awareness campaign had been launched to sensitise the people to the rights of women throughout the province.

He added that discrimination and violence against women had to become a subject of the past.

CM calls for end to discrimination, violence against women

Mr Khattak announced the establishment of a daycare centre at the Civil Secretariat and said the government would make efforts to ensure provision of inheritance rights and access to justice to women and removal to hurdles to their development.

He said the government would soon legislate on domestic violence and burns prevention and rehabilitation.

The CM said the government had established a toll-free helpline ‘Bolo and Badlo’ at the Directorate of Social Welfare, Special Education and Women Empowerment in Peshawar for registration of the cases of gender-based violence in the province.

He said the government had drafted the women’s empowerment policy for creating an enabling environment for women to take decisions for own betterment.

Mr Khattak said the policy provided implementation level guidelines and actions for stakeholders to work towards its goals.

“I appreciate the efforts of the Women Parliamentary Caucus for elaborating on the policy document to make it implementable,” he said.

The CM said the cabinet recently approved the amendments to the ‘Protection against Harassment of Women at Work place Act, 2010,’ which would definitely reduce and check harassment of women at workplaces.

He said the government had already enacted the Khyber Pakhtunkhwa Commission on the Status of Women Act, 2016, to make the women’s commission financially and administratively autonomous.

“For the welfare of widows and dispossessed people, we have enacted the Lissaail-i-Wal Mahroom Foundation Act, 2015,” he said.

The representatives of the Parliamentary Women Caucus Committee and UN Women appreciated the efforts of the government for empowering women and legislating to ensure equal rights for women.

Iranian-backed Houthi militiamen on Wednesday fired at a women's protest in the Yemeni capital of Sanaa calling for the return of the body of former Presdient Ali Abdallah Saleh.