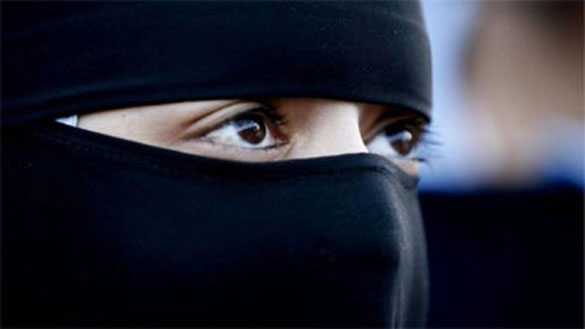 •  Ivanka Trump to Be Assistant to US President

•  Indian Muslim Women to Stretch beyond Divides with Yoga

A Muslim organisation in Norway has been criticised for hiring a communications officer who wears a full-face veil, or niqab.

The culture minister, Muslim MPs and other Muslim organisations have condemned the Islamic Council of Norway's move.

Norway's parliament has already supported banning the niqab in schools.

A vote on the issue in last year had cross-party support and the ban is likely to be enforced later this year.

Several European countries have banned the niqab in public places.

The Islamic veil across Europe

What's the difference between a hijab, niqab and burka?

The Islamic Council of Norway IRN, which says it aims to promote unity between Muslims and non-Muslims, appointed 32-year-old Leyla Hasic as its spokeswoman over the weekend.

"I find it amazing that the same people who are so concerned about freedom of expression act this way when a woman in a niqab comes out and participates in working life," he said.

But Culture Minister Linda Helleland said in a Facebook post that the move was "ill-advised" and would "create distance and less understanding".

"This is unwise and undermines the confidence Muslims need to build in relation to Norwegian society," he said.

Local media report that some mosques have indicated they will withdraw from the IRN over the controversy.

Ivanka Trump to Be Assistant to US President

Ivanka Trump is officially joining her father's administration as an unpaid employee with the title Assistant to the President, the White House says.

The US first daughter bowed to pressure following an outcry from ethics experts at her initial plans to serve in a more informal capacity.

Ms Trump, 35, said she had "heard the concerns some have with my advising the president in my personal capacity".

In a statement, the White House said it was "pleased that Ivanka Trump has chosen to take this step in her unprecedented role as first daughter".

Ms Trump said in her statement that she had been "working in good faith with the White House Counsel and my personal counsel to address the unprecedented nature of my role".

Ethics experts cried foul when it emerged last week that Ms Trump was to be given a West Wing office and security clearance, without formally joining the administration.

Critics said Ms Trump's role ought to be made official so she could be bound by federal employee transparency and ethical standards, including a law prohibiting conflicts of interest.

Former President Barack Obama's ethics counsellor, Norman Eisen, told the Associated Press news agency that "for a change in what has largely been an ethics disaster, the White House came to their senses".

"Let's hope it doesn't turn out to be an isolated moment of sanity," he added.

Ms Trump has already taken steps to limit possible conflicts of interest in her business affairs.

She has passed management of her eponymous fashion label to the company president and established a trust for oversight.

Ms Trump has also stepped down from a leadership role in the Trump Organization, although she will continue to receive fixed payments from the real estate firm.

Muslim schoolgirls, police officers, faith leaders and tourists were among thousands of people who joined hands on Westminster Bridge in a show of defiance a week after a terror attack that killed four people.

The vigil came before crowds held an 82-second silence at 2.40pm, to mark the time Khalid Masood launched his massacre.

Nurses and doctors from St Thomas' Hospital, where many of the injured were treated, joined those on the bridge, alongside police officers and members of the emergency services.

Rain began to fall as the crowd fell silent in the shadow of the Palace of Westminster, before dozens of people laid flowers near the site of the attack and along the bridge.

One of more than 35 victims injured when Masood ploughed his car into pedestrians was pushed in a wheelchair to lay a tribute to the four people killed in the rampage.

Craig Mackey, Acting Commissioner of the Metropolitan Police, told mourners: “This afternoon is about remembering the victims of last week's events.

“Our thoughts, our prayers, go out to everyone who was affected by the events last week.

"I would urge you, if you get time, to go on to the bridge, talk to Londoners, talk and get a feel for this great city and how it's come together in responding to these events."

Organisers of the Hands Across Westminster Bridge memorial said they wanted to show that London would not be divided by the atrocity, linking “all nations, faiths, orientation and sexes”.

More than 500 faith leaders from across Britain walked across the bridge together as part of the memorial, the Metropolitan Police Federation said.

School pupils aged nine and 10 from the Al-Sadiq and Al-Zahra Schools clasped yellow roses and held signs reading "Islam says no to terror" and "please don't kill innocent people" as they walked across the Thames.

Hundreds of members of the Ahmadiyya Muslim Youth Association were on the bridge, wearing T-shirts with the message "I am a Muslim, ask me anything".

Zafir Malik, an imam from the association, said they were invited by police and wanted to "show that what happened here last week had nothing to do with the so-called religious aspect that this has been given".

“We're here to show that we are united with our fellow countrymen and remembering those who have fallen, especially PC Keith Palmer. We are here and showing our solidarity for the country.”

Members of the Ahmadi Muslim community also carried banners reading “love for all and hatred for none” as part of a campaign similar to that seen after the Berlin attack.

Westminster Bridge was closed for the event, having reopened just a day after the attack and been adorned with floral tributes to the victims, was closed to traffic.

Vigils were also held across the country to coincide with the Westminster event, and a separate minute’s silence was held by the Metropolitan Police around the eternal flame at New Scotland Yard.

The death and carnage wreaked in 82 seconds of terror was detailed as inquests opened into the victims’ deaths at Westminster Coroner's Court on Wednesday.

He then crashed into railings outside the Houses of Parliament, ran into an entrance and stabbed PC Keith Palmer to death, before being shot dead by armed police.

Officers continue efforts to establish the motive of Masood, a 52-year-old Muslim convert who had a lengthy criminal history and lived in areas including Sussex, Birmingham and London.

Isis hailed him as a “soldier of the Islamic State” in its claim of responsibility for the attack but the extent of the group’s involvement remains unclear.

Twelve people have been arrested in connection with the probe but only one remains in custody - a 30-year-old man suspected of preparing terrorist acts.

A 32-year-old woman from Manchester been released on bail and 10 others arrested were freed with no further action.

At only 15 years of age, Sharmin Akter courageously resisted her mother's attempts to marry her off

Sharmin Akter, a Bangladeshi activist against early or forced marriage, has been honoured with the 2017 International Women of Courage Award along with 12 more women from around the world.

Melania Trump and Under Secretary of State for Political Affairs Thomas A Shannon presented the awards during a ceremony at the US Department of State office in Washington, Wednesday.

“The women were true heroes and extraordinary examples of finding the courage needed to help change the world,” Melania Trump told the programme.

“Together, we must declare that the era of allowing brutality against women and children is over, while affirming that the time for empowering women around the world is now,” she added.

At only 15 years of age, Sharmin of Jhalakathi courageously resisted her mother’s attempts to marry her off and secured the precious right to continue her education, setting an example for teenage girls across South Asia facing similar pressures, the statement says.

According to local media reports, Sharmin of Rajapur in Jhalakathi had been married off against her will in 2015 when she was a student of class IX. She later filed a case against her husband and her mother.

**Cindy Arlette Contreras Bautista, Lawyer and Founder of Not One Woman Less, Peru

The Secretary of State’s International Women of Courage Award annually recognises women around the globe who have demonstrated exceptional courage and leadership in advocating for peace, justice, human rights, gender equality, and women’s empowerment, often at great personal risk, according to the press release.

Since the inception of this award in 2007, the US Department of State has honoured over 100 women from more than 60 different countries.

Indian Muslim Women to Stretch beyond Divides with Yoga

Ahmedabad: Muslim women from the city are set to stretch out to yoga in their quest for fitness. An NGO will run the yoga classes and about 32 Muslim women from across the city have enrolled so far. The classes are expected to start from next week on private premises in Khanpur. Interestingly, Congress councillor Azra Kadri from Khanpur is among those who have enrolled.

"Yoga is associated with Indian culture and has nothing to do with religion," said Kadri. "I don't mind performing the Surya Namaskar as it is not a prayer but a collage of 12 Asans." Farhat Jahan Syed of the NGO said that yoga would make Muslim women more health-conscious. "More importantly, we want Muslim women to break social barriers," she said. "Yoga is a science and has nothing do with religion." There was an uproar last year when some Muslim clerics showed resistance to yoga, especially the surya namaskar, which they said was un-Islamic.

Syed said the classes would be conducted by Tasneem Kanchwala, 43, a resident of MB Towers in Khanpur. "Tasneem runs a yoga class attended by 35 women, mostly Muslim," Syed said. Tasneem, a mother of two, said she overcame an acute thyroid problem with the help of yoga and so recognizes its power.

"I learnt yoga and then started a class. Muslim women have taken to yoga in large numbers to stay fit," said Tasneem. "Even if you are a homemaker, yoga will help you remain fit and ward off diseases. Yoga is an important part of Indian culture and science, and when the whole world is embracing yoga we, as Indians, should not lag behind."

Tasneem said yoga does not demand a particular dress code. "I have women coming to my classes in burqa too" she said. Faeza Soniwala, 30, one of Tasneem's students, said she practises yoga daily and doesn't think she doing something un-Islamic. "I have been feeling fit and full of energy since I took up yoga," Soniwala said.