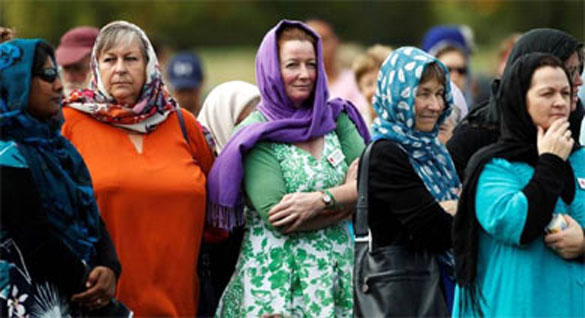 Women wearing headscarves as tribute to the victims of the mosque attacks are seen before Friday prayers at Hagley Park outside Al-Noor mosque in Christchurch, New Zealand March 22, 2019. REUTERS/Jorge Silva

KUALA LUMPUR/BEIRUT (Thomson Reuters Foundation) - A campaign by New Zealand women including Prime Minister Jacinda Ardern to don headscarves as a sign of solidarity with Muslim women after the nation’s mosque shootings has divided opinion over whether the gesture was a help or a hindrance.

Ardern won widespread praise this month for putting on a black headscarf when meeting members of the Muslim community after 50 people were killed by a suspected white supremacist at two mosques in the city of Christchurch.

But the move sparked an online backlash as critics pointed out that women in conservative Muslim countries like Iran and Saudi Arabia were forced to cover up for the sake of modesty or risk public rebuke, fines or arrest.

Women’s rights advocates said it was a sensitive issue for many women campaigning globally against the obligatory wearing of headscarves and other clothing in a fight against oppression.

“When we see non-Muslim women wear the hijab in solidarity of Muslim women it is very ironic and contradictory because our experience with the hijab is not empowering or uplifting in the political sense,” said Maryam Lee, a Muslim women’s rights advocate and author in Malaysia who chooses to not wear a hijab.

“I wish she (Ardern) hadn’t (wore it) but I understand where she is coming from because she is not a Muslim and not from a Muslim majority country.”

Women across New Zealand donned headscarves last Friday as part of a Head Scarf for Harmony campaign started by a doctor who heard about a woman too scared to go out as she felt her headscarf would make her a target for terrorism.

“Why is hijab a ‘show of solidarity’ symbol for New Zealand terror attack victims,” wrote Twitter user @RamaNewDelhi. “A key part of my feminism is to question shackles that religion imposes selectively on women.”

Lee, who has written a book called “Unveiling Choice” about the hijab, said women in Malaysia opting not to wear headscarves would now receive more harassment and pressure to wear the hijab by Muslims citing Ardern’s actions.

PRESSURE ON OTHER WOMEN

Women in Muslim-majority Malaysia, which has a large population of ethnic and religious minorities, have been barred from government offices in the past for attire that officials deemed as indecent, such as skirts or shorts.

Masih Alinejad, an Iranian activist and journalist who hosts the website My Stealthy Freedom where women in Iran post photos without headscarves, had mixed feelings about the campaign.

Alinejad has lived in self-imposed exile since 2009 and received death threats for her campaigning against the obligatory wearing of headscarves.

“I felt admiration that a prominent leader and women in New Zealand showed compassion to the Muslim community, but I also felt that you are using one of the most visible symbols of oppression for Muslim women in many countries for solidarity, and it also broke my heart,” said Alinejad.

“That is why I call on them to show their sisterhood and solidarity with us, who are being beaten up, imprisoned and punished for fighting against compulsory hijab as well.”

“Giving sympathy to a victim’s family is part of a feminist position, and the veil is a symbol for a community that is currently a victim,” said Jakarta-based Pratiwi.

“Although there are those who criticize her, the majority respect the move. What is important is that Jacinda is able to build a movement of New Zealanders who sympathize with the victims.”

RIYADH: There are plans to increase the number of Saudi women in the tourism sector, the Saudi Press Agency (SPA) reported.

The director general of the National Center for Tourism Human Resources Development, Nasser Al-Nashmi, said more than 9,000 women had benefited from the body’s training programs.

“There are 8,108 tourism graduates in the Kingdom and there are plans to increase the number by 10 percent in the upcoming years,” he said. The female participation rate in the tourism sector is currently 22 percent.

He said the center was helping to localize employment by developing the skills of Saudi nationals.

Days after two underage Hindu girls were allegedly abducted and forcefully converted to Islam for marriage in Pakistan’s Sindh, a fresh case emerged.

Another minor Hindu girl was allegedly abducted from Ghokti in Pakistan on Tuesday. According to the FIR registered based on the complaint of the 16-year-old’s father, the incident occurred at Dhani Buksh Pitafi village on the intervening night of March 16 and 17.

The report added that four men broke into their house at around 3 am, dragged the minor girl to a vehicle waiting outside the home and took her away.

The villagers, however, have claimed that the girl eloped with a boy and willingly converted to Islam of her own free will.

The minister also sought a report from the SSP regarding the incident and instructed Sindh minorities affairs director Mushtaq Ahmed Soomro to contact the relatives of the girl and provide them with all possible assistance.

Pakistan Prime Minister Imran Khan has ordered a probe into reports of abduction, forced conversion and underage marriages of the two Hindu girls and to take immediate steps for their recovery.

The two sisters were allegedly abducted and forced to undergo religious conversion. Pakistani media had reported that a video had surfaced in which the girls claimed that they willingly converted to Islam.

Minister of External Affairs (MEA) Sushma Swaraj, however, refuted the claims of willing conversion in a series of tweets. "Even the Prime Minister on Naya Pakistan will not believe that girls of this tender age can voluntarily decide about their conversion to another religion and marriage, Sushma Swaraj had said.

Muscat: Women members of the Oman Olympic Committee will take part in Arab Women’s Sport International Conference under the theme “Challenges and Opportunities” scheduled to be held in Cairo from March 27 to March 30, 2019.

Sayyida Sanaa bint Hamad Al Busaidiyah, Chairman of Oman Women’s Sport Committee, will deliver a working paper at the opening session of the conference entitled “Arab policies towards women exercising sport”. The conference will deal with a number of topics including the reality of Arab women’s sport, the challenges ahead, sports culture of Arab women and working strategies for developing women’s sport and other matters.

UAE is among top nations in the region and across the world to empower women, said Azza Sulaiman, Member of the UAE Federal National Council (FNC) during a discussion on 'UAE Efforts to Empower Emirati Women'.

The discussion was held at the fourth Women Police Regional Conference which kicked off in the Capital on Sunday.

"The UAE's efforts in empowering women and elevating them to top positions in the police and security fields is one of the most supportive models for women," she said. "The UAE has integrated women in all fields of work including politics and this has elevated their position in the region. Emirati women have been trained in military and police and are able to serve effectively and with competence in all areas."

Sulaiman noted that 71 per cent of the UAE women have higher education qualification and they are in job positions that require high skills and competence.

Shamsa Saleh, secretary-general of the Emirates Council for Gender Balance, said the UAE considers men and women alike in all fields of employment and beyond. "The country guarantees equal services in health, education, domestic requirements and other areas for all genders," she said.

"There have been great efforts in educating women and equipping them with all necessary skills to compete effectively in all fields. Founding father of the nation, the late Sheikh Zayed bin Sultan Al Nahyan, paved way for a conducive environment for women to study and work and this has been taken on by the current leaders."

The conference was attended by women police officers from regional and international police associations and several local government agencies.

A staggering 477 women were killed and another 232 were injured at the hands of violent men in Turkey in 2018, according a report prepared by the Umut (Hope) Foundation, a prominent NGO dedicated to reducing personal gun ownership, ahead of International Women’s Day on March 8.

Of this number, 120 were killed with guns, 89 with rifles, 132 with sharp objects, while the remaining 136 were either choked or beaten to death, the report said, basing the figures on news reports.

“In 2015, a total of 414 women murders, 309 of whom were killed by weapons or tools, reflected on the media, while in 2018, some 477 women deaths were reflected,” the NGO said in its annual report, adding that in the last four years a total of 1,760 femicide cases had been covered in Turkish news.

When the deaths were analyzed by Turkey’s regions, the Marmara region came first, with a total of 141 deaths in 2018, marking an increase of 18 percent compared to the previous year. The same region had recorded 120 women deaths in 2017, the report said. Istanbul came first in the number of femicide cases in 2018, with a total of 82 deaths, followed by the northwestern province of Bursa with 22 deaths.

The Mediterranean region came second in the number of femicide cases, with 87 deaths, followed by the Central Anatolian region.

The number of women deaths showed a decrease in the country’s southeastern and Black Sea provinces compared to the previous years, the report said.

Apart from these 43 victims, another seven foreign nationals were injured by men.

The women were either victims of their husbands, brothers, or another male relative.

There were also others who were killed brutally for wanting to break up from their boyfriends or not wanting to form a romantic relationship with men who made advances.

According to figures provided by an NGO which keeps a tally of femicides across the country, some 440 women were killed in Turkey in 2018.

Some 440 women were killed just in 2018, a report by Kadın Cinayetlerini Durduracağız Platformu (We Will Stop Femicide Platform) previously had stressed.

Of this number, 131 were logged as “shady deaths,” in which there is no blatant connection between the cause or reason and the death. But women’s rights groups have long blamed authorities for failing these women by ignoring circumstances and factors that may have led to the murders.

Thousands of women are expected to flock to central Istanbul demanding greater women’s rights and denouncing violence against women.