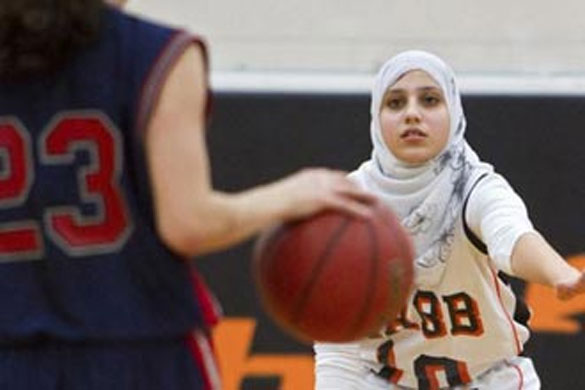 Photo: Bosnian-American Indira Kaljo has successfully petitioned FIBA to allow the wearing of the hijab in domestic games, but not in international competition, yet

A year ago, Indira Kaljo, a female Muslim basketball player, chose to wear the hijab, the Islamic headdress for women.

She took the decision following an "awakening" during a charity trip to earthquake-hit Haiti.

But the Bosnian-American player quickly realized she would not be able to play professionally in Europe as basketball's governing body had forbidden the use of any type of headgear, including hijabs, turbans or yarmulkes, during official games.

"It doesn't make sense," says Kaljo, who believes the ban to be discriminatory towards athletes who want to follow their faith, including Sikhs and Jews.

In 2014, she launched an online petition, which collected some 70,000 signatures, attracting worldwide attention to the ban and, she says, influenced the International Basketball Federation, or FIBA,  to soften its position on head scarves.

Indeed, in September 2014, FIBA announced that women would be permitted to wear religious head coverings in domestic basketball games for a two-year provisional period.

However, FIBA has yet to grant players the same latitude in international competition, saying it would consider the matter in a board meeting later this year.

Two weeks after the FIBA decision, the Qatari women's basketball team withdrew from the 2015 Asian Games, in protest of the ban on the hijab, still in effect in international games.

FIBA says its decision has nothing to do with religion, but is only related to sports concerns. According to the article, all headgear, hair accessories and jewelry are prohibited.

"It sucks," says Kaljo, who is currently in Istanbul. "This is our passion, our dream. This is what we worked for since we were little kids."

Kaljo says she does not buy the safety concerns reason given by FIBA for the rule.

She says she has been comfortable while playing covered.

"I play the same. For me, I am more comfortable now than before (when) I was playing uncovered," Kaljo says, adding the long-sleeve dress made in a sports material helps better contain sweat, which can be sometimes uncomfortable, especially in close contact with other players.

"The first time playing with the hijab, I had a good game," she said.

"It makes me really sad when I hear of women who stopped playing after deciding to wear hijab," complains Kaljo.

The passionate athlete believes there will be more Muslim women playing basketball to represent their country, if FIBA expands the September 2014 ruling at the international level.

She currently continues her career in the Saudi team, which was established in 2006, taking part in private local and international competitions, as there is no official national league in the country.

"I think Muslim women should be comfortable in their skin, whether they wear the hijab or not, covered or not covered," says Kaljo, who is also running an NGO, Activne, which aims to promote personal development for Muslim women through sports.

Two women in Saudi Arabia were released last week after more than two months in jail for driving a car, which is forbidden for women in the country.

Kaljo thinks this ban also should be removed like other rulings that restrict women participation in daily life.

JEDDAH — Women’s sports will be allowed in the Kingdom according to Shariah law, Saudi Olympic Committee Executive Director Hussam Al-Qurashi has announced.

“Women have the right to exercise and participate in sports, because a healthy mother raises healthy children. But the Saudi Olympic Committee will not do anything against the decorum of Saudi society and the instructions of the Council of Senior Scholars. The committee believes in the principles of Shariah,” said Al-Qurashi.

“We support women’s sports as instructed by our Islamic teachings. We will not hold a sports event for women without proper licensing and without ensuring that the event conforms to the teachings of the Holy Qur’an,” he said.

Al-Qurashi said that there is an Islamic committee monitoring the decisions of the Saudi Olympic Committee to ensure that it follows Islamic teachings.

“We will be monitoring all women’s sports events to ensure that they follow Islamic principles. We are looking into allowing sports events for women. We had women participate in the Olympics, but they adhered to Islamic regulations,” said Al-Qurashi.

He, however, admitted that there were no women’s sports clubs for competitive purposes.

The announcements of the names of the male and female team members were made separately. The four women will be given wildcard entries so they can compete without meeting formal qualification standards.

Saudi Arabia entered two women under a similar arrangement for the 2012 Olympics in London.

European women have gone to join jihadist groups in the Middle East in greater numbers than previously thought, with their children at risk of becoming “the next generation of foreign terrorist”, according to a report by the EU’s joint police agency in The Hague.

The findings, contained in Europol’s “terrorism situation” report for 2015 out on Wednesday (20 July), come amid a sharp increase in terrorist attacks and offences in and around Europe last year.

Uncertain motives behind the attack in Nice (Photo: Reuters

The study noted that, in the year of the Charlie Hebdo and Paris attacks, EU states’ police forces arrested 687 people for “religiously inspired/jihadist” offences in 2015, compared to 395 the year before and 216 the year before that.

It said the majority of attacks were linked to separatist movements.

But the number of jihadist attacks jumped from four in 2014 to 17 last year and the religious attacks were responsible for almost all of last year’s EU terrorist fatalities - 150 out of 151.

The Europol study said “a significant percentage” of the 5,000 or so EU nationals who have gone to join jihadist groups in the Middle East were women.

The figure was 40 percent of all known Dutch nationals who went and 20 percent of those from Finland and Germany, with similar patterns in Belgium, Spain and the UK.

Europol said that the Islamic State (IS) jihadist group, unlike the al-Qaeda group, has called on women to travel alone to Syria without a male guardian or “wali”.

It said IS propaganda portrayed them as “empowered managers of their households”. They were forbidden to leave after they arrived, but some were given weapons training, while others joined female-only forces that enforced moral and dress codes.

It said IS needed them to lure young male fighters with promises of brides.

It also said IS propaganda justified male foreign fighters also having non-Muslim sex slaves on grounds that this was “the ultimate humiliation of non-Muslims and a good deed”.

Europol said many of the women quickly get pregnant and that one third of the 70 Dutch minors currently in Iraq and Syria were born there.

It noted that IS was just one of six or seven radical groups in the region that recruited Europeans.

But its propaganda was more effective because it “has largely replaced the image of the Muslim victim with that of the Muslim conqueror, taking revenge for alleged aggression against Islam”.

Police from Italy, the Netherlands, and Spain indicated that fewer of their nationals are attempting to join up than in 2014.

But Europol said IS, for one, is likely to launch more and more overseas assaults “to appear defiant in the face of coalition attacks” on its home territory.

It warned of the risk of a chemical attack in Europe by returning foreign fighters due to the expertise and materiel available in Iraq and Syria, both of which had chemical weapons programmes.

It also said “most of the perpetrators of the 2015 attacks … were returnees from conflict zones”.

But it said these EU nationals should not be mixed up with the flow of Syrian refugees, despite the rhetoric of far-right movements in Europe, because “there is no evidence of a systematic problem” linking refugees to attacks.

The Europol report came out a week after a French man of Tunisian origin killed 84 people in Nice, France, for motives that remained unclear and two days after IS claimed responsibility for an axe and knife attack on a German train.

It also came out four months after IS killed 32 people in a symbolic strike in the EU capital.

But with IS and other extremist groups fanning out their operations across north Africa, Central Asia, the Indian subcontinent, and the Far East, Europol warned that EU nationals are also at risk overseas.

“In 2015, kidnappings of EU citizens and nationals of other Western countries took place in the Afghanistan-Pakistan region, Egypt, Libya, Mali, the Philippines, Syria and Yemen”, it said.

The military has reported freeing as many as 10,000 Boko Haram captives this year but none of the 219 girls from Chibok school.

Nigeria’s military says it has rescued 80 children and women held captive by the Boko Haram extremist group in a remote northeastern village.

Army spokesman Col. Sani Kukasheka Usman says they were freed on Tuesday by troops who attacked a gathering of the Islamic fighters at Gangere village in Borno state.

The military has reported freeing as many as 10,000 Boko Haram captives this year but none of the 219 girls from Chibok school. That mass abduction in April 2014 shocked people around the world and brought global attention to the seven-year Islamic insurgency that has spread across Nigeria’s borders.

The insurgency also has caused a massive humanitarian crisis among thousands of people forced from their homes.

THIRUVANANTHAPURAM: Even as the conversion of Hindu girl Nimisha alias Fathima, who recently went missing along with 20 others from Kerala,+ continues to grab the media's attention, a woman here has alleged that her daughter, an aeronautical engineering student in Kochi, was forcibly converted to Islam.

In her complaint to the police, Mini Vijayan from Pangode in Thiruvananthapuram said her daughter Aparna, who had changed her name to Shahana, was a student of Jual Education Trust in Ernakulam, which she joined in August 2013, and was staying at a hostel there. "She was forcibly converted to Islam+ ... When we came to know about it, we approached the police who then located her in Kozhikode," she said.

The police located her and produced her before the high court. "But instead of us, Aparna said she would like to go with Sumayya, the woman who accompanied her to the court," Vijayan said.

As per police, Aparna is currently staying at a religious centre at Manjeri in Malappuram.

"She is staying at Sathya Sarani, an institute which aims to propagate Islam among non-Muslims. Though she used to be in touch with me earlier, she went incommunicado ever since the case of Nimisha appeared in the media," Vijayan said.

The police said the options before them are limited as she has already told the court that she would like to be with those who converted her to Islam.