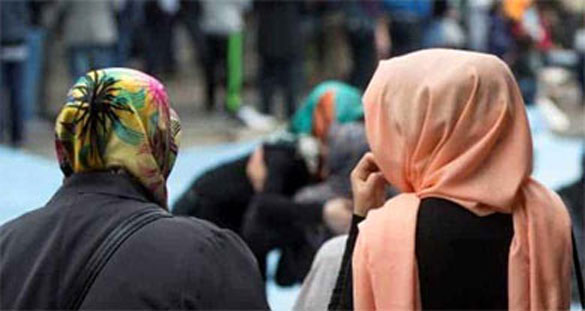 •  Women Own 50 Percent Of E-Stores Registered In Maroof, Saudi Arabia

Campaigners have joined forces to condemn an investigation of three women by Malaysia’s Islamic authorities who refused to stop wearing a hijab.

The event included a three-hour panel discussion between the three, which Lee described as an “intellectual discourse based on the women’s lived realities.”

After hearing about the event, Malaysia’s religious affairs minister, Mujahid Yusof Rawa, ordered the Islamic authorities of Selangor to investigate the women.

In a joint statement, Lee, Niza, and Sofia said they were “unequivocal” in their belief that none of Malaysia’s laws had been violated.

“We condemn this unnecessary investigation as an abuse of power and is aimed at harassing and intimidating women activists who are speaking out on issues that affect women and organisers those who do not serve the status quo.”

The executive director of a Malaysia’s human rights and law reform organisation Lawyers for Liberty, Latheefa Koya, said women in Malaysia should not be investigated for discussing their religious choices.

“This does not mean those who attended the forum would lose their faith. Let a woman think freely and choose whether they want to wear the hijab or not,” said Koya.

“Muslim women in our Western liberal democracies complain that their right to wear a scarf, a niqab or a hijab in public institutions and in the public space is not respected,” said Willy Fautre, the director of Human Rights Without Frontiers, a Brussels-based rights group who spoke with New Europe. “Women in Iran and Malaysia complain that they are forced to wear a headscarf, and who challenge the repressive laws of their country, are at the risk of losing their freedom as it has recently been the case with Vida Movahedi. She was sentenced to 1 year in prison in Iran for refusing to cover her head. These courageous women dramatically need the support of human rights organisations.”

Malaysia, where 60% of the population is Muslim, has long been held up as a moderate and relatively progressive Muslim country, but recently there has been a move towards strict Islamic conservatism.

Women Own 50 Percent Of E-Stores Registered In Maroof, Saudi Arabia

JEDDAH — About 49.5 percent of the electronic shops registered in Maroof e-portal, the Ministry of Commerce and Investment has announced.

It said the Maroof e-portal has a total of 27,000 shops, about half of which were owned by women.

The ministry said it received more than 19,700 complaints against the electronic shops.

It said some shops would withdraw the price of the commodity from the clients› bank accounts without dispatching it to them.

According to the ministry, some electronic shops would charge them more than the actual price of the product.

The ministry said it had closed down as many as 26 accounts on the social media for propagating fake commodities.

It said the fake goods advertised on the social media include, among others, perfumes, beautification mixtures and weight reducing herbal medicines.

The ministry said since the beginning of the year 2018, it had closed down about 80 accounts for promoting fake goods. The accounts had more than a million followers.

The ministry strongly warned against advertising fake products on social media and said harsh punishments would be waiting for people who do this in violation of the country›s commercial regulations.

The ministry has also called on owners of e-shops and social network marketers to register their trade activities with Maroof, which will ensure credibility of the traders’ activities and products, and protect the rights of buyers. Marketers are urged to make sure that the party selling goods has a commercial registration or has signed up through the e-service.

The portal provides an evaluation of services and the quality of e-stores in the Kingdom, and presents the opinions of dealers and clients on such stores.

This e-service also gives the seller an opportunity to market their electronic shop online within various Maroof platforms, enabling online store owners to add all their social media accounts, their website and contact numbers to their page with Maroof, which makes it is easier for buyers to access and contact them, the ministry said.

The service preserves the rights of consumers, making it possible to lodge a complaint in case of any commercial fraud, by contacting the ministry’s consumer call center (1900) or through the application of a commercial violation report via smartphone.

Maroof is a free electronic service and takes only a few seconds to sign up to the website: www.maroof.sa.

JEDDAH: Dr. Yousef bin Ahmad Al-Othaimeen, secretary-general of the Organization of Islamic Cooperation (OIC), has called on all member states and affiliated institutions to encourage young girls to study and work in the fields of science, technology, engineering, mathematics, information technology and communications.

“The 7th Ministerial Conference of Women, which was held in Burkina Faso, endorsed a resolution adopted by the Conference of Foreign Ministers of the OIC held last month in Abu Dhabi. This resolution calls on member states to approve legislative and executive measures offering science, technology, engineering and mathematics programs to women, to bridge the gap between their education and the requirements of the labor market,” Al-Othaimeen said.

He added that as areas such as the technology and communication sectors became increasingly important, more skilled workers would need to enter the workforce, which would provide great opportunities for young, talented and qualified women.

PRISTINA: Kosovo police and prosecutors have interrogated several of the women who returned from Syria by plane on Saturday, lawyers who took part in the questioning said on Monday.

Kosovo brought back 110 of its citizens from Syria, including 32 women, 74 children and four militants who had gone to fight in the country’s civil war.

The four fighters were immediately arrested and detained for 30 days awaiting questioning, while women and children were sent to the Foreign Detention Center in the outskirts of Pristina.

“I represented a woman who came back from Syria. She is accused for being part of the terrorist groups and she was in very bad health condition,” lawyer Fehmie Gashi-Bytyqi told Reuters.

A number of visitors were seen in front of the Foreign Detention Center on Monday morning, hoping to see relatives. Children, some small girls wearing hijabs, were outside in the sunny weather playing soccer with police officers.

Doctors were constantly entering and leaving the buildings to carry out medical checks on the returnees.

Merita Bajraktari, who was among the many female lawyers present, said: “My client is accused of being part of terrorist groups and she is also the wife of another person who was returned to Kosovo on Saturday where he was arrested.”

After the collapse of Daesh’s self-declared caliphate in Syria and Iraq, countries around the world are wrestling with how to handle militants and their families seeking to return.

The population of Kosovo is nominally 90 percent Muslim, but largely secular in outlook. More than 300 of its citizens had traveled to Syria since 2012 and 70 men who fought alongside militant groups were killed.

Police said 30 Kosovan fighters, 49 women and eight children remain in the conflict zones. The government said it plans to bring back those who are still there.

International and local security agencies have previously warned of the risk posed by returning fighters. In 2015, Kosovo adopted a law making fighting in foreign conflicts punishable by up to 15 years in jail.