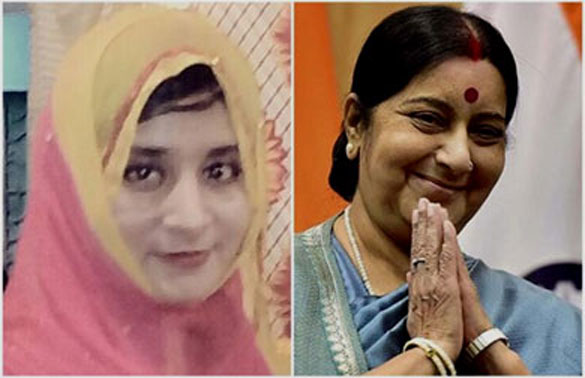 •  Iran: Women’s Coach Complains of Having to Play under High Pollution

LUCKNOW: Despite frequent ceasefire violations and heavy exchange of fire with Pakistan forces on the international border and across Line of Control, Union minister for external affairs Sushma Swaraj helped a Lucknow boy, living in the by lanes of Old City, tie the knot with his Pakistani fiancee last Friday.

The 'Nikah' of Naqi Ali Khan (27), an engineer from Agha Mir Deodhi area near City Station and Sabahat Fatima (24) from Karachi, was solemnised by senior Shia cleric and vice-president of the All India Muslim Personal Law Board, Maulana Kalbe Sadiq.

The couple got married on Friday and their reception was held on Saturday.

The marriage of Naqi Ali Khan and Sabahat Fatima had been fixed almost two years ago but cross-border tension caused visa hassles for the bride.

A TOI report from Lucknow in July about a similar case kindled hopes and Sabahat took to social media and contacted Sushma Swaraj last year. The minister helped the couple and granted visa to Sabahat.

"Our families are related. But were divided when the two countries underwent partition. The groom's maternal grandmother and the bride's paternal grandmother were sisters and lived together in Lucknow before partition," said Naqi's elder brother, Muzaffar.

Incidentally on Sunday, the couple watched a Bollywood movie in which the female lead plays the role of a Pakistani and the male lead is an Indian.

"Both of us are extremely grateful to Sushma Swaraj for this great gift. We are hopeful that the Indian government will help us in getting Sabahat Indian nationality as well," said the couple.

LAHORE: The Chief Minister’s Strategic Reforms Unit has launched ‘Women on Wheels: Motorbike Subsidy Scheme’, as phase-II of its Women on Wheels project, giving 3,000 motorcycles to women at subsidised rates.

According to a press release issued here on Sunday, the campaign has been launched in collaboration with the provincial transport department and the Bank of Punjab. The motorcycles would be given under a transparent balloting process.

The Punjab government would provide equity subsidy of Rs24,975 and 100 per cent mark-up on each motorbike. Each applicant will make down payment of Rs27,000 and pay 12 easy monthly installments of Rs1,856. The motorbikes will be customised pink, CD-70 Dream Motorbikes with additional features including leg guards and a carrier bag.

Applications would be received from today (Monday) to Feb 25. The campaign is geared towards empowering women, and to serve as a counter narrative to the existing marginalisation of women in the country.

The age limit is 18 to 40 years. Other requirements include a valid learner’s or actual licence and a Punjab domicile. The candidate must either be employed/own a business or students, permanently residing in any of these districts - Lahore, Multan, Sargodha, Faisalabad and Rawalpindi.

The monthly income of the applicant, or her family, in case of students, should not exceed Rs30,000. Students must attach an express consent of their parents/guardians who should also be quoted as guarantors. The applicants must possess valid secondary school/matriculation certificates.

The documents to be attached with the application form include a passport sized photograph, a copy of the valid CNIC, Punjab domicile certificate, secondary school/matriculation certificate, and in case of students, an affidavit stating that the maximum income does not exceed Rs30,000 along with Rs3,000 non-refundable application fee.

The chief minister will conduct the balloting. The successful candidates will participate in Women on Wheels Mega Rally.

The SRU had introduced the initiative in collaboration with the respective city traffic police and district governments in November 2015 to empower women through provision of free motorcycle training. The campaign was launched in Lahore, Multan, Faisalabad, Rawalpindi and Sargodha, training over 3,000 women there. More are being trained at the moment.

BUKIT MERTAJAM, Jan 21 — An Indonesian woman lodged a police report today claiming that she was assaulted by a man, believed to be of unstable mind, at a bus stop at Taman Perwira, for not wearing the headscarf.

Seberang Perai Tengah (SPT) district police chief ACP Nik Ros Azhan Nik Abdul Hamid said the 24-year-old woman, who works at a factory in Perai, claimed that the incident occurred last January 6 while she was  with her sister waiting  for bus to Bukit Mertajam.

He said the incident occurred about noon when a man, who looked disheveled and believed to be of unsound mind, approached her and asked where she was going,.

“According to the woman, she replied , telling the man that she was going to town to see a friend when the man became angry at her for not wearing the headscarf and pushed her head with his hand,” he said.

Nik Ros Azhan said a video recording of the incident had been viralled after it was shared by a Facebook user.

He said police had identified the man involved in the incident and went to his house, but the man, aged 30, was not home.

“According to his uncle, the man has been of unsound mind following a road accident 15 years ago,” he said, adding that the police would continue to track him down. — Bernama

Mecca – A Saudi based non-profit organization is currently helping female inmates and relatives of jailed Saudi prisoners with the necessary trade skills like sewing to help them integrate with society.

Tarahom, meaning “Compassion,” is a national organization that was established in several Saudi cities with the aim to look after the care and welfare of prisoners and their families.

The committee also provides other projects, such as waste recycling, for inmates inside prisons.

Iran: Women’s coach complains of having to play under high pollution

The coach of an Iranian women’s football team complained about her team having to play in a badly polluted weather condition.

All men’s games were cancelled to avoid risking health of players and coaches. (The state-run ISNA news agency – January 20, 2018)

The coach of Rahyab-e Melal said, “The pollution was so much that my players’ faces were covered with dust, their eyes burnt and our scope of vision was very limited. It was as if women had stronger lungs compared to men. Do we have to go blind, before they cancel the games?”