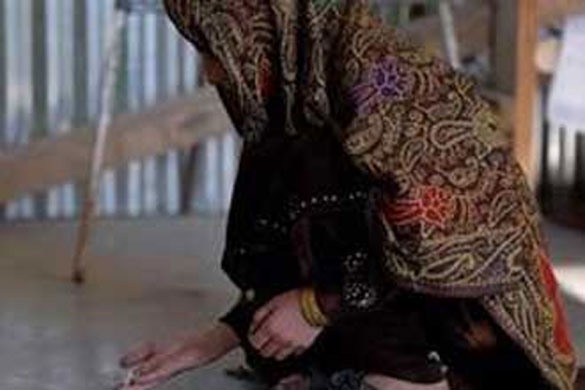 Photo: Five underage girls saved from being married off

•  Pakistan: Five Underage Girls Saved From Being Married Off

A Kuwaiti woman military officer has garnered a lot of attention on the internet lately, after it was reported that she was among the officers participating in Saudi Arabia's massive 20-GCC nation military exercise.

Al Anood Al Abdali, a physical education teacher in Kuwait, had successfully passed all tests to become an officer in the Operations Sector in 2012.

Al Abdali has become the second Arab woman military officer to make headlines in recent years, after UAE's Major Mariam Al Mansouri was lauded in the region and all over the world, when she participated in airstrikes against Daesh in Syria and Yemen in 2014.

Al Mansouri was also awarded the Asia Game Changer Award at a function at the United Nations (UN) Headquarters in New York in 2015.

Al Abdali's participation in the military exercise has stirred up a debate online where while most netizens supported the presence of women within the armed forces - there are also those who opposed their participation, saying women are not fit for such operations and should not be involved in dangerous or risky actions.

But it's not just woman officers making their presence felt in the armed forces, but a few years back, a 26-year-old Pakistani woman fighter pilot, Ayesha Farooq, became a nightmare for the Taleban - when she bombed the terrorist group's hideouts in North Waziristan as part of mission Zarb-e-Azb.

Pakistan: Five Underage Girls Saved From Being Married Off

MIRPURKHAS: Mirpurkhas police saved five underage girls from being married off by their parents in a Digri taluka village on Saturday.

The girls, one of them nine years of age, belonged to the Kohli minority community, whose members claimed ignorance of the relevant law.

Sources told Dawn that Noor Ahmed Narejo, an activist of the Sindh Rural Partners Organisation, a non-governmental organisation, had informed Mirpurkhas DIG Javed Alam Odho and SSP Muhammad Usman Ghani that the marriages of five underage girls were to be held on Feb 20 and 21 in Abdul Shakoor village, Puban union council.

Heavy contingents of the Digri police station raided the village, took pictures of the girls and stopped the marriage.

The police took some relatives of the girls, including Dewan and Somji, fathers of two of them, to the police station.

When questioned, they reportedly said they knew nothing about the Sindh Child Restraint Act, 2013. They told the police that underage marriages were common in scheduled caste communities such as Bheels and Kohlis. The girls’ elders were allowed to go home when they gave an undertaking to the police that they would not marry their girls until they reached 18 years of age.

JEDDAH: About 70 percent of shops selling products exclusively for women in Jeddah were caught for violation of various rules, almost half of which were linked to fake feminization practices.

“Around 1,700 or 90 percent of women’s shops are feminized shops since the launch of a three-phase program by the Ministry of Labor (MoL),” Mohammed bin Sultan Al-Shihri, head of the Committee of Textile and Garment Merchants at the Jeddah Chamber of Commerce and Industry, was quoted as saying by local media.

The figures represent shops selling women’s products such as abayas, lingerie, accessories and beauty products, with the exception of outlets in popular markets, he said. “The violation of rules were due to the fact that many female employees leave their jobs and force shop owners to hire alternatives, which leads to fake feminization practices.”

Al-Shihri said the feminization program for women’s shops is ongoing, but the last phase was delayed due to reasons like lack of willingness of women to work as salespersons, even after the MoL opened the door for women to work in many sectors.

“Many saleswomen also do not prefer working double-shifts. Lack training has spurred the MoL to look for ways to enhance the final phase of the program,” said Al-Shihri.

“The ministry’s decision to feminize shops 100 percent has reduced the number of employees put pressure on shop owners to implement the decision,” he said.

“Around 25 percent to 30 percent of women’s shops have exited the market, leading to a reduction in the number of branches by almost half, while 10 percent shifted switched to other areas,” said Al-Shihri.

He said efforts are under way to find solutions to the proble, including finding ways to enhance training, increase support of the Human Resources Development Fund, prepare the labor market and provide transportation to female employees.