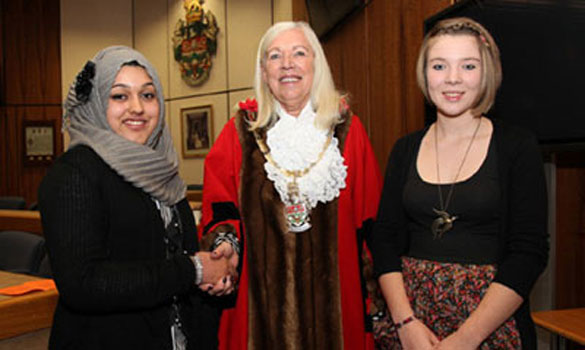 •  Sumaiya First Person to Speak In British Parliament, In a Hijab

•  Minister for women says Church of England must reform

Photo: Sumaiya First Person to Speak In British Parliament, In a Hijab

KUWAIT CITY, Nov 23: The Ja’afariah Personal Status Court of Appeals at Capital Governorate presided over by Judge Dr Adel Al-Failakawi upheld the verdict issued by a lower court, which gave a woman the right to divorce her husband thereby dismissing an appeal filed by the latter.

Counsel to the wife Lawyer Zainab Al-Ramzi urged the court to uphold the previous verdict, stressing that the estranged couple could no longer live together peacefully as husband and wife.

She further stressed that marriage is a divine relationship that must involve love and mutual respect, which this particular marriage lacked.

She indicated that the husband did not try to sustain the marriage and frustrated the woman, putting her in a ‘no marriage-no divorce’ situation.

Four acquitted: The Appeals Court revoked the decision of the Court of First Instance and acquitted four citizens of kidnapping three minors. The court chaired by Justice Nasr Al-Hayed cleared the four defendants of abducting the three juveniles who happen to be siblings.

Meanwhile, police arrested the three minors in a commercial complex after their father had reported to the police they were missing for 20 days. Following investigations, the three girls directed security officers to the house of the defendants and they were arrested, tried and sentenced to five years in jail, based on charges of physical assault and rape.

Attorney of the second and third defendants Najeeb Al-Waqyan attended the session and argued that his clients were innocents of all accusations. He noted there were no evidences or proof to those allegations.

He maintained his clients did not kidnap the girls, indicating they came themselves to the accused. He also said the medical report proved the girls were not assaulted physically.

Fraud charges quashed: The Criminal Court chaired by Justice Muteib Al-Ardi acquitted a company representative of falsifying two work permits of the Ministry of Social Affairs and Labour, vaccination certificate of the Public Authority for Agricultural Affairs and Fish Resources (PAAAFR), and duplicating the signature of a government agency.

Defendant lawyer Hussein Al-Asfour attended the session and pleaded with the court to clear his client of the charges due to lack of evidences. He stressed his client had no connection with the case, except for the documents he submitted to Ministry of Social Affairs and Labour.

Sumaiya First Person to Speak In British Parliament, In a Hijab

A 16-year-old girl is thought to have become the first person to speak from the House of Commons despatch box in the British parliament while wearing a hijab, The Times newspaper reported Saturday.

Sumaiya Karim a biology, chemistry, history and maths student, was speaking as the Youth Parliament held its annual session in the lower house's chamber, where Britain's MPs gather.

Karim, from Wokingham, west of London, said: "Wearing the hijab was my own choice."

The Muslim hijab scarf covers the head and neck but leaves the face exposed.

British ministers and opposition shadow ministers stand at the despatch boxes when they address the Commons.

The democratically elected Youth Parliament members, aged 11 to 18, are elected to represent the views of young people in their area to government.

Minister for women says Church of England must reform

LONDON: Britain's women and equalities minister Maria Miller said the Church of England needs to reform itself and act swiftly to introduce women bishops, in an interview published Saturday.

England's state church failed to pass the necessary legislation in a vote Tuesday, the measures not receiving the required two-thirds backing in all three houses of the 470-member General Synod.

Though the bishops and the clergy backed the measure in sufficient numbers, those elected to represent the lay churchgoers did not, the plans falling short by six votes.

Some 42 of the 44 Church of England dioceses back the change.

That has focused attention on the Church's procedures and whether it reflects modern England.

"If you're going to tackle the problem, I think the church needs to be answering some of the questions as to why their system works the way it does, and are they really happy that it's reflective of the views of their membership," Miller, also the culture secretary, told The Guardian newspaper.

"It's important that the church tackles this.

"It's extraordinary that the church seems to have ended up in a situation where a vote that was taken doesn't seem to be reflective of the overwhelming view of the members of the church.

"It's for the Church of England to run its own procedures and processes, but I hope that they have heard, loud and clear, the strength of feeling on this, and that it acts quickly."

The Church of England has "undoubtedly" lost credibility after voting to reject the appointment of women bishops, its leader the Archbishop of Canterbury said Wednesday.

Rowan Williams accused elements inside the Church of being "wilfully blind" to the trends of wider society after its governing body, the General Synod, failed to pass the legislation by a razor-thin margin.

Tuesday's vote followed years of wrangling between traditionalists and liberals that exposed bitter divisions in the 85-million strong worldwide Anglican communion, as well as in its mother church.

Luke Harding, and agencies in Riyadh

Saudi Arabia has been accused of behaving like Big Brother after introducing technology that alerts male "guardians" by text whenever women under their guardianship leave the country.

The kingdom already bans women from driving and excludes them from most workplaces. It also disapproves of women's sport. Since last week it has been operating a new electronic system that tracks all cross-border movements.

The system functions even if a woman is travelling with her husband or male "guardian", with a text sent immediately to the man. Saudi women must get formal approval from their guardians to travel abroad, and have to hand in an infamous "yellow slip", signed by a male, at the airport or border.

TO the senior secret police officer who slapped her repeatedly, toppling her off her feet, Samar Yazbek was a traitor.

Marching in antigovernment demonstrations was bad enough. But what made this a truly appalling betrayal in the officer’s eyes was the fact that Ms. Yazbek was among the scarce prominent Alawites who had broken publicly with the government.

Starting in earnest in 1970, when Hafez al-Assad grabbed the presidency in a coup, the Alawites, adherents of an offshoot of Shiite Islam, have wrested Syria away from its historical Sunni masters. They could lose everything if the Sunnis reclaimed power.

“You are a black mark on all Alawites,” the officer spat out at one point. He eventually unleashed two muscular goons who dragged Ms. Yazbek through a series of basement torture cells as a dire warning.

This is my reversion story, Insha-Allah. My journey to Islam was really a life experience.

Ever since I was a little girl, I was fascinated with South Asian culture.

And as a teenage and as a result of a book report at high school, I became totally obsessed with Laurence of Arabia, and he had a strange fascination with Islam, so I did that.

And then before that my brother had an extensive collection of National Geographic issues that some friends of our parents had given us.

There was a correspondent by the name of Thomas Abercrombie who was actually a revert, and in the 1960s he covered the Hajj (Pilgrimage to Makkah) for National Geographic. And I remember reading the article in late 1980s and I was looking at the pictures of all of these people circling the Kaaba and I remember thinking to myself with great emotion how much I wanted to be there. I didn’t know what it was.

ISLAMABAD: Walking past an unpaved path in a Mingora mud colony, one could almost miss the blue door covered with a dirty cloth, inviting little attention to what transpired behind it. But locals at the Afghan settlement were aware that the sounds emanating from inside were of Chand Bibi’s classroom in session.

The 58-year-old educator taught the Holy Quran to young girls and elderly women and schooled them on basic hygiene and social values in light of the scripture. The premises, which belong to a local Fazal Shah, comprise a single square concrete structure, on which stands a small unlit room with a straw mat over which students gather every afternoon.

Once the students are done with reading the Quran, the nature of learning changes; black plastic bags are brought out.

KARACHI: The Sindh High Court has granted the foreign affairs and interior ministries two weeks to inform it about the whereabouts of the missing son of neuroscientist Dr Afia Siddiqui and how he was granted an American citizenship.

“In case, no reply is received, we would be compelled to direct the attendance of the secretaries concerned on the next date,” warned the division bench, irked by the failure of the two ministries to file a reply to the court’s queries.

Headed by Chief Justice Mushir Alam, the bench was hearing a petition seeking the direction of the government to provide legal assistance to Dr Siddiqui, who stood trial in US on charges of shooting at FBI agents and soldiers at Bagram Airbase in Afghanistan, her repatriation and the recovery of her children.