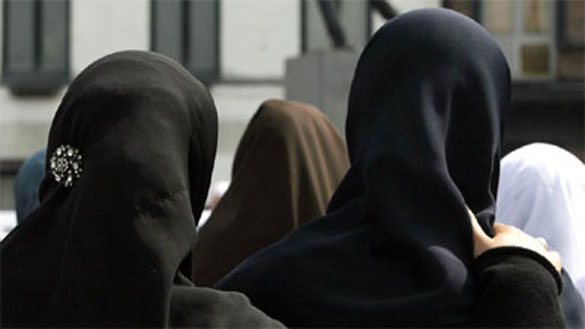 The Islamic Sharia Law allows men to divorce their wives by simply saying ‘Talaq’ three times, a custom that has turned into a cultural and political flashpoint in recent times. (AP File Photo)

•  Speech at UNK Focus on Misconceptions of Muslim Women

Women in Kerala divorced through the Islamic tradition of triple Talaq can now receive free legal aid sponsored by the state government.

On Wednesday -- the first day of its sitting -- the committee received 21 complaints of women left to fend for themselves. If the committee does well, similar ones will be constituted in all 14 districts.

Israel has appointed its first female Muslim diplomat, who will soon represent Tel Aviv in Turkey.

Rasha Atamny, 31, a Palestinian Arab born in Baqa al-Gharbiya town in central Israel, will serve as the embassy’s first secretary in Ankara, the Times of Israel reported.

She studied psychology at the Hebrew University of Jerusalem before she was accepted into the three-year foreign ministry cadet course, one of only 21 candidates to make the cut.

In a blog written while she was in university, Atamny said she honed her diplomatic skills in her collegiate Model UN club. A year after joining the club, Atamny was accepted to represent Israel at the UN in New York as a youth ambassador for three months.

She described as a turning point her participation in the Human Rights Assembly Committee during a discussion on the violation of women’s rights.

“This time I listened to the speeches from Syria, Saudi Arabia, Iran, Iraq, and Egypt condemning Israel’s systematic violations of women’s rights while I, an Arab-Muslim woman of Palestinian origin, represent Israel at the UN General Assembly,” she wrote. Atamny is not Israel’s first female Arab diplomat, but she is the first to be sent abroad — Christian-Arab Rania Jubran worked for the foreign ministry from 2006 to 2009, but left shortly before she was due to be sent to Cairo.

Speech At UNK Focus On Misconceptions Of Muslim Women

KEARNEY, Neb.-- They are a group thought of one way, but really Muslim women have become an influential voice.

Thursday, they were the topic of discussion at UNK.

Kadayifci-Orellana is a visiting assistant professor at Georgetown University and was Thursday's presenter at Copeland Hall.

The topic was one that several students had began taking interest.

"It was one of my students favorite topics, so I thought, 'Well, when we bring a speaker in the spring, I should probably maybe follow up on that issue because it was so popular with my students," said Carol Lilly, UNK International Studies Program Director.

Thursday's speech not only dispelled some of those stereotypes with women, but also showcased how Muslim women are empowering themselves, even in the United States.

One Muslim student said she didn't realize there are so many prominent muslim women. She said that it's inspired her to have bigger voice.

Lilly said the topic is more than a political one and hopes more of her students pursue studying it more.

Just mention the name of the Somali-born critic of radical Islam and you’ll divide opinion.

The former Dutch politician, who survived female genital mutilation as a child and now lives under constant protection, is either a truth-teller about Islamic doctrine , or an ally of anti-Muslim bigots, if not one herself!

Hirsi-Ali cancelled her Australian visit this week after threats to her security.

About 400 Muslim women signed an online petition opposing her visit. They said their views reflected, "the huge diversity of opinion among Australian Muslim women."

The spokesperson for the group is Melbourne businesswoman Hanna Assafiri Is she happy Ayaan Hirsi Ali has called off her tour?

In a video published by The Guardian on Wednesday, three Muslim women discuss how their lives changed after the European court of justice's decision allowed employers to ban religious clothing at the workplace inside the European Union. The video was published in both English and Arabic.

Even though the women live in three different European countries, the Netherlands, the United Kingdom (still in Brexit transition period) and Spain, the video illustrates similar struggles they now face in the aftermath of the ruling.

In their moving testaments, Ibtissam Al Zahir, Nada Abdel Muniem and Ayane Baudouin reflect on how difficult and unfair it is for a Muslim woman to have to choose between losing her hijab or her job.

In the video, Al Zahir who lives in Spain emotionally explains how she had to make the difficult decision to remove her Hijab, saying "at the end, I said, OK I will take it off, just give me work." She goes on to express her guilt over the decision.

Abdel Muniem who lives in the Netherlands speaks of similar struggles and explains that wearing a Hijab where she currently lives would be "like a wall separating her" from Dutch society. She eventually had to resort to wearing a hat and scarf to keep her hair covered and still be able to work.

Baudouin in London, UK says that she is fortunate because she has yet to face issues with employers judging her choice to wear a hijab. But also explains that if she ever had to make a decision between making a living or "expressing her religious identity," the decision would be extremely difficult to make.

Shortly after the video was shared on Facebook people took to the platform to share their opinions on the issue.

While the European Court of Justice's ruling would technically apply to all religious symbols, including Christian crosses, the Hindu bindi (red forehead dot) and the Jewish kippah, the specific cases brought before the court featured Muslim women.

The ruling specifically addressed a Belgian woman working for G4S Secure Solutions. She was banned from wearing the headscarf as part of a company policy barring all visible religious symbols. Another case involved a French woman who works in IT. She was asked to remove the hijab after a client complained.

A fine of Rs. four lakh was paid to the Indian court by Batala-based NGO ‘Sarbat Da Bhala’ to save a Pakistani mother and her India-born daughter.  The Pakistani woman Fatima along with her sister was arrested at the Attari railway station in 2006 while they were travelling from Pakistan to India in Samjohta train. Both the women were arrested for the possession of contraband drugs.

The Indian court pronounced her ten years of rigorous imprisonment and a fine of Rs four lakh after finding her convicted and also stated that if they unable to pay off the fine they will have to stay more in the prison.  At the time of arrest, Fatima was pregnant and had delivered her baby girl Hina in the jail.  President of Society for Women Empowerment and Green Causes Advocate Navjot Kaur Chabba, who is facilitating the release of the two women and Indian girl Hina, said that she had met all the three in the jail on Thursday.

“Both of them are very happy with their early release and have expressed gratitude towards everyone pursuing their case and have also urged the Pakistan government and Pak NGO’s to come forward to help Indians lodged in Pak jail” she said.