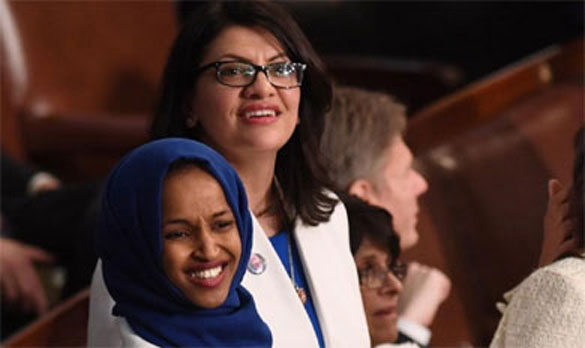 (Bloomberg) -- Israel is considering barring Democratic Congresswomen Ilhan Omar (D-Minn.) and Rashida Tlaib (D-Mich.) from visiting during a trip scheduled to start this weekend, people familiar with the matter said, declining to be identified because of its sensitivity.

At issue is Omar and Tlaib’s support for a boycott against Israel, which they voiced during congressional debates. Israel has prevented activists from the Boycott, Divestment and Sanctions movement from entering the country, turning some away after they landed at the airport.

The prime minister held consultations Wednesday with top ministers to decide whether the visit should be banned and professional and legal teams are examining their decision today, said one person, who added that there is a possibility that Israel won’t allow the visit in its current format.

A decision to ban the congresswomen would likely escalate Israel’s growing rift with the Democratic Party, which has become increasingly critical of the Israeli government under Prime Minister Benjamin Netanyahu, a firm ally of President Donald Trump. One person familiar with the matter said that Trump’s criticism of the women is a factor in Israel’s reluctance to grant them entry.

The two congresswomen, who are members of a group of four female Democratic lawmakers under attack from Trump, planned to visit both Jerusalem and the West Bank, according to organizers of the trip.

--With assistance from Ivan Levingston and Fadwa Hodali.

To contact the reporter on this story: Gwen Ackerman in Jerusalem at gackerman@bloomberg.net

To contact the editors responsible for this story: Riad Hamade at rhamade@bloomberg.net, Benjamin Harvey, Michael Gunn

A Dallas-area Muslim cleric was ordered Thursday to pay $2.5 million to a woman he's accused of sexually exploiting.

District Court Judge Emily Tobolowsky ruled that the cleric, Imam Zia ul-Haq Sheikh, 50, must compensate the woman for mental anguish and other damages, The Dallas Morning News reported. Sheikh had been an imam at the Islamic Center of Irving, one of the biggest mosques in Texas.

In an email to the paper, he said he believed the judgment was in error.

"Unfortunately, litigation in this country does not always favor the truth," he said. "In most cases, it boils down to how much financial stamina one has, and whether one has good legal representation."

Sheikh was accused of sexually exploiting the woman -- identified only as Jane Doe -- after providing her with mental health services when she turned 18.

"Jane's emotional dependency as a result of being counseled by defendant from age 13 to age 19 led Jane to be fearful of losing defendant's support in her life, and therefore created a situation where Jane was unable to refuse defendant's requests," the lawsuit said, referring to Sheikh's alleged requests for sexually explicit photos and videos, and, ultimately, for intercourse.

When the woman was 19, the pair had sex at a motel, according to the paper. Sheikh gave her a pregnancy test afterward to ensure he wouldn't lose his job. He later cut off contact with her.

The woman's attorney, Susan Adams, told the paper in a statement that the judgment "offers justice and hope not only to her but to other survivors of abuse."

Prime Minister Narendra Modi said on Thursday his government took steps to help Muslim women stop living in fear and removed the practice of triple talaq as he addressed the nation in his sixth straight Independence Day speech.

“The fear of triple talaq kept haunting Muslim women in our country, which is why we took the step to criminalise instant talaq,” PM Modi said in his Independence speech.

“Remember how scared Muslim women were, those who suffered due to the practice of triple talaq, but we ended that. Many Islamic countries do not have this but in India, to give justice to Muslim mothers and sisters, we hesitated. If we can remove Sati, when we can take strong steps against female infanticide, child marriage, why can we not remove triple talaq,” he said.

The Muslim Women (Protection of Rights on Marriage), Bill, 2019, which criminalises instant ‘triple talaq’ among Muslims and attracts a jail term of three years for the husband came into force on August 1.

Track runner Mecca Muhammad of the Pacific Coast Shockwaves won big at the 2019 Junior Olympics in Sacramento. She earned three championship medals after coming in first place in the 800m, the 4x800m, and the 4x400m in the 11-12 division.

The 800m was the biggest challenge for Muhammad, one of her competitors outran her once before.

“The last 200m, I got in front of her. She was challenging me on the 150 mark, and I had to sprint off because my legs were numb,” she said. “I end up sprinting and she ended up 50 meters behind me, so I got a good time. She helped me reach the time.”

“Since we’re all good friends, we work well together, we practice together,” Muhammad said.

For the 4x800m relay, the Shockwaves ran a 9:31.62 time, taking first place an almost breaking the national record for the event. The Los Angeles Jets hold the record after running a 9:30.72 time in 1997.

“Pretty much all of my relay teams are undefeated, especially my 4x800m,” Muhammad said. “We set the meet record.”

At the age of eight, Muhammad started running competitively. She gets inspiration from her father and her older brother who also have experience running track.

“He’s one that pretty much challenges me in a lot of stuff,” Muhammad said about her brother. “I ran against him once, I couldn’t beat him, so I always look up to him. I always tell him I’m gonna beat him one day.”

Muhammad’s favorite subjects are art and science. She also has authored a book called “Family, I Love You” that is sold at her parent’s book store, Malik Books.

“It’s about how much I love my family because when I was younger, I used to always make cards and gifts, sometimes even songs for my parents and my brother,” she said. “Now they’re all in this book.”

She aspires to be a child dermatologist working at Kaiser when she grows up. In her spare time, she creates cards.

“I like drawing, [and] coloring,” Muhammad said. “Sometimes I make half cards, I make a poetry side and just some regular words.”

Muhammad also helps her parents at their bookstore. The patrons at times give her tips to better her customer service skills.

“Sometimes—I don’t know why—but I always eat when I talk to people,” she said. “My mom tells me to put down the food and help the customers, sometimes even the costumers say that.”