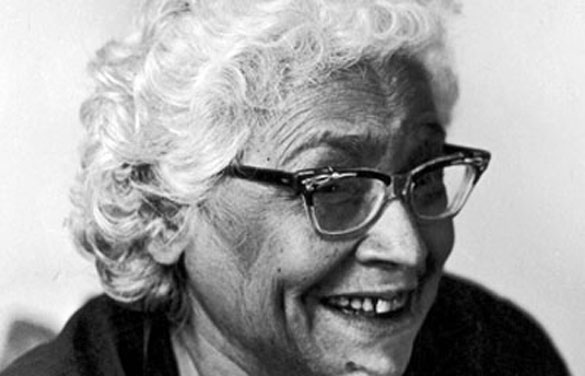 •  Iranian Rips Off Hijab After Cleric Orders Her To Wear It Properly, Threatens Arrest

•  Hanan Donates Rs.1.5 Lakh She Got As Support to Flood Relief Fund

One of the most celebrated Urdu authors, Ismat Chughtai was born on August 21, 1915 in Badaun, Uttar Pradesh. Chughtai, writing alongside the likes of Saadat Hasan Manto and Rajinder Singh Bedi, explored female sexuality, class conflict, and middle-class morality. One of her most enduring works remain the short story, Lihaaf (The Quilt) that appeared in Adab-i-Latif, a literary magazine based in Lahore. Told from the perspective of a young girl, the story explored the theme of homosexuality under the ‘lihaaf’. Published in 1942, Chughtai’s bold, iconoclastic writing sparked a controversy and the author found herself at the receiving end of scathing criticism. Later, charges of obscenity were also levelled against her.

Her works include short stories like Kalyan, Ek Baat, Choten, among others. Hardly one to bow to conventions, Chughtai relentlessly wrote about women, their desires and the oppression they faced. Her novel Tedhi Lakeer (The Crooked Line) is one of the famous works in Urdu literature.

Her protagonist Shama is rebellious, headstrong and knows what she wants. Chughtai presents a word picture of the way Indian Muslims lived under the colonial rule, and explores their struggles and desires. Often considered as a quasi autobiographical work of the author, Tedhi Lakeer is also her magnum opus that provides a commentary on the state of the country just before Independence.

Chughtai passed away on Oct 24, 1991 and remains an integral figure in Urdu literature. Her works continue to initiate discussions and no discussion about feminist literature or women authors are complete without her.

Iranian Rips Off Hijab After Cleric Orders Her To Wear It Properly, Threatens Arrest

A video of a Muslim woman ripping off her hijab after a heated argument with a cleric has gone viral, as per reports.

The argument, which took place in Iran, shows a cleric ordering a woman to dress in a proper manner and wear her hijab in the right way, reports said.

The woman, in rage, removed her hijab when the cleric threatened to have her arrested. "Fix your hijab or ill get you arrested," the cleric said.

Wearing hijabs in Iran have been mandatory for 40 years and if now practiced appropriately could lead to arrest.

Iranian law dictates that woman must cover their heads in public.

There is a growing movement of people in Iran who oppose the laws that make it mandatory for women to wear veils.

The 25-year-old said "the struggle for our people" brought her together with Abid Shamdeen.

The announcement comes days after the fourth anniversary of the IS attack on Ms Murad's village, Kocho.

Six of her brothers were killed in the massacre, and she was kidnapped.

During her time in captivity, she was bought and sold several times, and was subjected to sexual and physical abuse - including gang rape.

Ms Murad shared her story after managing to escape, and was appointed the first UNODC Goodwill Ambassador for the Dignity of Survivors of Human Trafficking in 2016.

On Monday, both Ms Murad and Mr Shamdeen shared a picture of themselves as they announced their engagement.

Yesterday was a special day for @AbidShamdeen & I. We are very thankful and humbled for all the wishes & support from our family & friends. The struggle of our people brought us together & we will continue this path together. Thank you for your support everyone!

It is unclear exactly when the couple met. However, Mr Shamdeen, who lives in Germany, said on Twitter it was "during very difficult times in both our lives, but we managed to find love while fighting a huge fight".

"The struggle of our people brought us together & we will continue this path together," Ms Murad tweeted.

The news the engagement has been greeted with delight by people on social media.

Yazda, a US-based NGO which the couple work with, shared a picture on Twitter, adding the organisation was "wishing them a happy and safe life and a better future for them and all the survivors of the genocide".

Authorities said Monday that they are looking into sexual assault allegations by a young actor against Italian actress Asia Argento _ one of the most prominent activists of the (hash)MeToo movement against sexual harassment.

Los Angeles County sheriff’s Capt. Darren Harris said investigators from his department will seek to talk to Jimmy Bennett or his representatives about the alleged incident at a Southern California hotel in 2013, when Bennett was 17.

The move comes in response to a New York Times story saying Argento, 42, settled a legal notice of intent to sue filed by Bennett, who is now 22, for $380,000 shortly after she said last October that movie mogul Harvey Weinstein raped her.

Argento and Bennett co-starred in a 2004 film called “The Heart Is Deceitful Above All Things” in which Argento played Bennett’s prostitute mother. Bennett says in the notice that he had sex with Argento in the Ritz-Carlton hotel in Marina del Rey, California, in 2013. The age of consent in California is 18. The notice says the encounter traumatized Bennett and hurt his career, the Times reported.

Investigators have learned no police report was filed at the time, Harris said. The newspaper said it received court documents that included a selfie of Argento and Bennett in bed. Three people familiar with the case said the documents were authentic, the Times reported.

In a statement to The Associated Press on Monday, a lawyer for Bennett said the actor “does not wish to comment on the documents or the events” at this time. The statement asked for privacy and noted that Bennett would take “the next 24 hours, or longer, to prepare his response.”

Argento became one of the most well-known activists of the (hash)MeToo movement after she told the New Yorker magazine that Weinstein raped her at the Cannes Film Festival in 1997 when she was 21. Argento told the magazine that she continued to have a relationship with Weinstein because she was afraid of angering him.

Weinstein has been indicted on sex crime accusations involving three women, but not including Argento. Representatives for Argento did not respond to a request from The Associated Press for comment.

Hanan Donates Rs.1.5 Lakh She Got As Support To Flood Relief Fund

Hanan, the 19-year-old girl from Kerala who was recently both appreciated and trolled on the social media for posting photographs of her life’s challenges, has donated ₹1.5 lakh for flood relief in the State.

Hanan, who received ₹1.5 Lakhs from well-wishers after a photograph of her selling fish to support her family and fund her education went viral, said: “The people of the State had turned up to help me when I told my story. These were donations from ordinary people, from ₹50 to ₹1,000 or more that came into my account, making it ₹1.5 lakh. In this time of crisis, I want to give it back to them who had sent their love through money.” .

Hanan transferred the amount to the Chief Minister’s Disaster Relief Fund on Saturday. “We had been trying to transfer the funds for the past two days, but could not do it due to network issues. Today we went to the bank and got it done”.

When asked about how she would restart her small business, Hanan said she would wait till the crisis was over. “Across the State, people have to rebuild their lives after this disaster. I would too.”