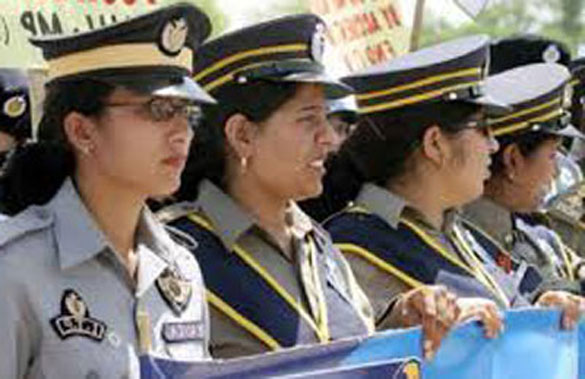 Photo: More Women to Be Inducted In Traffic Police in Pakistan

•  More Women to Be Inducted In Traffic Police in Pakistan

•  750,000 Children to Get Residency Permits in Saudi Arabia

•  Pakistan: A Woman’s Touch Wins over a Rural Electorate

A 17-year-old girl has exposed the scale of Islamic sex tourism in India where Muslim men from the Middle East and Africa are buying 'one month wives' for sex.

Campaigners for Muslim women's rights said while short term 'contract marriages' are illegal in India and forbidden in Islam, they are increasing in Hyderabad, in southern India, where wealthy foreigners, local agents and 'Quazis' – government-appointed Muslim priests – are exploiting poverty among the city's Muslim families.

The victim, Nausheen Tobassum, revealed the scale of the problem when she escaped from her home last month after her parents pressurised her to consummate a forced marriage to a middle aged Sudanese man who had paid around £1,200 for her to be his 'wife' for four weeks.

She told police she had been taken by her aunt to a hotel where she and three other teenager girls were introduced to a Sudanese oil company executive. The 'groom', Usama Ibrahim Mohammed, 44 and married with two children in Khartoum, later arrived at her home where a Qazi performed a wedding ceremony.

According to Inspector Vijay Kumar he had paid 100,000 Rupees (around £1,200) to the girl's aunt Mumtaz Begum, who in turn paid 70,000 Rupees to her parents, 5,000 Rupees to the Qazi, 5,000 Rupees to an Urdu translator and kept 20,000 Rupees herself. The wedding certificate came with a 'Talaqunama' which fixed the terms of the divorce at the end of the groom's holiday.

"The next day he came to the house of the victim girl and asked her to participate in sex but she refused. She is a young girl and the groom is older than her father," Inspector Kumar told The Telegraph.

Her parents reassured him they would persuade their daughter and told her she would be punished if she did not. Instead she ran out of their tiny one room home in Hyderabad's Moghulpuri neighbourhood and was rescued by a police patrol. The police arrested the groom, the victim's aunt and the Qazi, and issued a warrant for her parents' arrest – Nausheen is a minor under Indian law and cannot marry until she reaches 18. Her parents are now in hiding but will be charged with arranging a child marriage, 'outraging the modesty' of a woman, and criminal conspiracy.

Inspector Kumar said there are dozens of illegal short term contract marriages in the city, and that the Sudanese man they arrested had come to Hyderabad after a friend in Khartoum told him he had taken a '40 day wife' during an earlier visit.

"If a Sudanese wants to have sex, he has to pay three times more [in Sudan] because there are far fewer girls there, or he takes a second wife. In India the girls are coming for a cheaper rate and they are beautiful. Even if they are only staying for a few days they are doing this kind of illegal marriages for sex," he said.

He said the visitors want to marry because they believe prostitution is forbidden under Islam. Poor families agree to contract marriages because they have many daughters and cannot afford to pay for all their weddings.

Instead, they have a series of one-month contract 'marriages' to fund their own genuine wedding.

Shiraz Amina Khan of Hyderabad's Women and Child Welfare Society, said there were up to 15 'contract marriages' in the city every month and that the number is rising because.

"They come to Hyderabad because it has maximum downtrodden families. Thirty to forty per cent of families are going for the option of contract marriages to relieve their poverty. It has to be stopped," she said.

Nausheen Tobassum, who is now living in a government home for girls said in an interview before she was placed in care, that she had filed a complaint to stop the same thing happening to other girls.

"I didn't know what was happening and I agreed in ignorance. They forced me. They changed my date of birth certificate and made a fake one, where I was shown as 24 years old. They exploit girls and that's why I went to police. I had to show courage to go to police against my parents. I don't want to go back to my home, I am scared," she said.